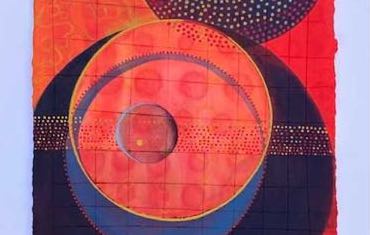 This week’s LEO cover artist, Skylar Smith isn’t a newcomer on the local arts scene. She’s been around and has been a part of the growth and development of local arts and arts education. When the pandemic happened, Smith began to look at her art in a different way. It was a way to reach deeper into herself and give herself some certainty in a world that had very little of that.

“I started working in my studio in my basement and I’ve made more art in the quarantine than I have in a long time because I had to sit still and I couldn’t go anywhere,” said Smith. “ And I wasn’t distracting myself with other things, which in the past I’ve been a full-time teacher and I’m a mom. And, you know, I was always outside putting stuff in front of my art-making. There was always something more important that I had to do in my mind.”

Smith realized quickly that painting wasn’t simply something she enjoyed doing, it was something that she needed.

“During COVID, it was like, I have to do this or I’m going to lose my mind, because my kids are home and my husband is going to work every day. So we’re like locked down in the house and I just needed an outlet or I was going to go crazy.”

In this time, Smith’s work took on a serene quality that has given her the space to understand her work and herself differently.

“It has a lot of color, but I’ve been thinking about how art can really be this meditative-like healing process for me to engage in,” said Smith.  “But then, if the audience can also feel a sense of like calmness or I don’t know, just this idea of geometric shapes fitting together in a pleasing way.”

In transitioning to this very thoughtful style, she began to study and look at the way geometry worked.

“I think a lot about mandalas and different geometric designs that are used in meditative practices, like in yoga and Buddhism,” said Smith. “I know that in the past I’ve done workshops that merge art and yoga together… and just thinking about how color can incite different emotions and feelings, like just color alone.”

Smith began to experiment with how she used the materials she had on hand. Mixing hard and soft materials like pen and pencil with watercolors or liquid pigments.

“It’s very therapeutic, and working with water-based media, like watercolor, ink and paint; that media is very fluid and you can’t, I mean, you can control it, but it’s like more working in it,” said Smith. “And whereas dry media, like pencil and pastel or oil pastel… those things are easier to control because they’re not like running all over the paper.”

Smith begins each painting with what she calls a “ground,” where she takes away the starkness of white paper and washes it with color. From there, she looks at the paper until the ideas begin to take form.

“So I try to create this history of  layers of color and marks, and then I’ll just kind of stare at it for a while,” said Smith.  “And, then all of a sudden I’ll be like, ‘Ooh.’ I’ll just kind of get this vision of like shape, or I usually just start to map out some kind of composition.”

Smith used her travels and education to pull together the inspirations for the new works. An alumni of MICA in Baltimore and the Art institute of Chicago, Smith spent a couple of years working at the Baltimore Museum Of Art, curating shows in Chicago and traveling the world including teaching for several months in Peru. In her journeys, she collected fabrics and art objects that she still looks to for creative juice.

Now that she’s settled in Louisville while raising her two daughters with husband, T. M., Smith has found a rhythm.

“For me, making art, I’m like getting out of my brain,” said Smith.  “I’m not trying to think. I’m just like, it is as cheesy as it sounds, but it’s like just kind of trying to tap into some kind of like… something else is telling me the decisions I need to make. But also, I’m trusting the decisions I’ve made. There’s no right way to make a painting. So that’s why I love art.”