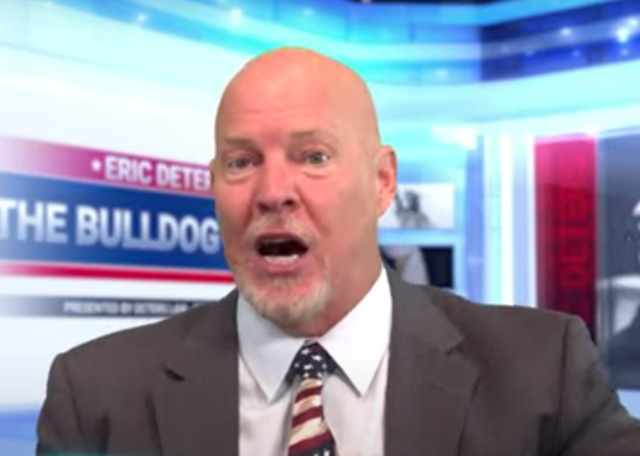 Deters, who has been suspended from practicing law in Kentucky due to ethical violations, is organizing Freedom Fest, a “kid-friendly” event in Morning View, Kentucky, about 30 miles south of Cincinnati.

The honorary guest in idea only? Former U.S. President Donald Trump, who lost his bid for reelection in November and who won’t actually be at the event.

The date? Sept. 11, the day nearly 3,000 people died in 2001 due to four al-Qaeda terrorist attacks in the United States and a day that conservatives typically hold sacred.

Deters, who hosts conservative podcast The Bulldog, explains his rationale in a YouTube video.

“Since the election, here in the Tri-State, there has not been any pro-Trump, pro-American rally or an event. Bulldog Media and some other organizations felt like there was a pent-up need for everyone to get together and bond together, rally together, like an outlet,” Deters says in the video.

Deters promises that “one of the top Tri-State DJs” and Cincinnati band Dangerous Jim and the Slims will supply the music. The free event also will have fireworks, food for purchase and “plenty of nice, clean bathroom facilities,” he says.

Deters says Kimberly Guilfoyle — the girlfriend of Donald Trump Jr. and a former host and contributor on FOX News until she allegedly was pushed out due to ongoing sexual harassment — and Tomi Lahren — another conservative FOX News contributor — will speak during the event.

The former attorney gives no indication that the reason for his big party — the former president — will be there. But he does say who he thinks should attend.

Deters’ event is being organized as coronavirus cases in Kentucky and Ohio are soaring, largely due to the highly transmissible Delta variant. As of Aug. 24, all of Kentucky’s counties — including Kenton County, where Morning View is located — are labeled as high risk for COVID-19 on the Centers for Disease Control and Prevention’s data tracker.

According to figures from the CDC and the U.S. Department of Health and Human Services released Aug. 17, 17.5 out of 100 hospital admissions in Kentucky are COVID-19 patients, a 48% increase over the previous week. There were 15,754 new COVID-19 cases reported, a 60% increase. Pediatric COVID-19 cases in Kentucky have shot up 400% over the last month.

But Deters appears to be undeterred.

“It’s going to be off the charts.”