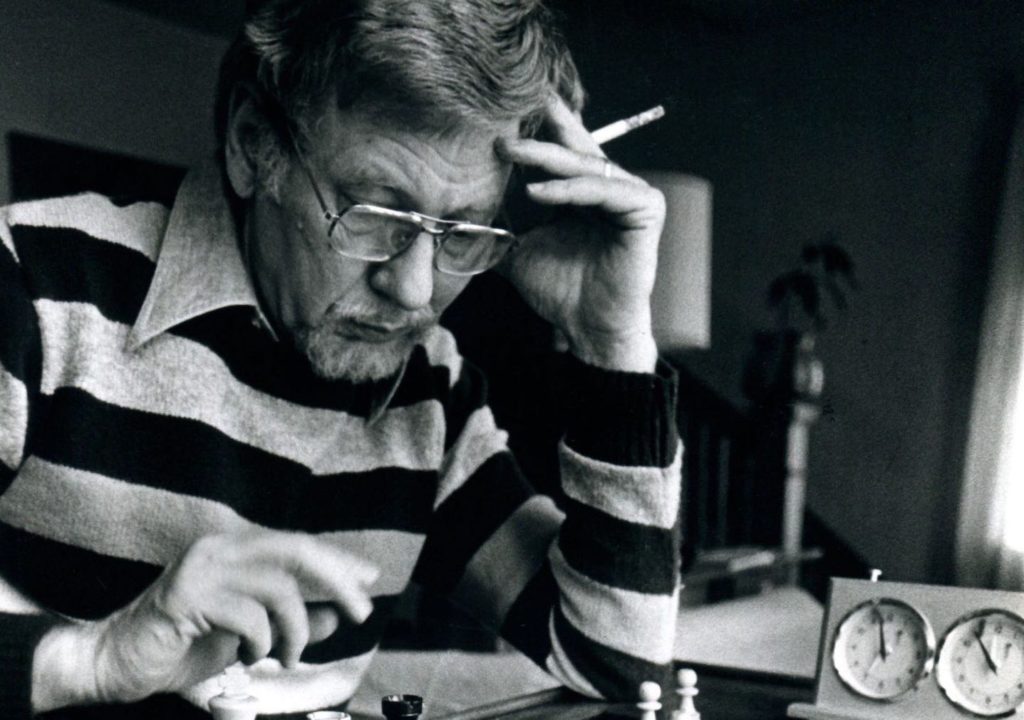 The KET Documentary about the life of Walter Tevis airs this week on KET2.

The work of author Walter Tevis is seeing renewed interest after Netflix turned his novel “The Queen’s Gambit” into a limted series last year. Tevis wrote several works that have been adapted to the big screen including “The Hustler” and “The Color of Money.” “The Queen’s Gambit” is the first mini-series of his work. Tevis was born in San Francisco but his family was from Kentucky. As a young child, he developed a heart condition and his family abandoned him in California, where he was placed in a children’s convalescent home. When he was 11, he rode a train across the country and rejoined his family in Kentucky. He spent much of the rest of his life in Kentucky.

For the first time, his life is being chronicled in a KET documentary titled, “Walter Tevis: A Writer’s Gambit,” directed by Tom Thurman whose work has included “Buy the Ticket, Take the Ride: Hunter S. Thompson on Film,” and another KET documentary about Louisville dancer Wendy Whelan.

Thurman grew up in Shelby County where Tevis also spent time. For him, as a fan of Tevis, this project was a great opportunity to tell the story of this somewhat troubled but prolific Kentucky writer. LEO caught up with Thurman to discuss the documentary and Tevis’ life.

LEO Weekly: Tell me about the documentary.

Tom Thurman:  Well, the documentary’s an hour long, and it allows me the opportunity with KET’s support, of course, to examine both his life and his work and more importantly, the real distinct and clear overlap between the two. So, I was also fortunate enough to, um, secure the participation and support of Walter Tevis’ two children, his daughter Julie and his son Will. So that allowed me to make what you might deem an authorized documentary, because no feature-length documentary on Walter Tevis exists.

What drew you to documentaries?

When I was a child growing up in Christiansburg, Kentucky, which is a small farming community in Shelby County, we had two very important things upstairs. We had a television and we had a pool table. So since there was no theater in Shelbyville, going to the movies was, you know, somewhat difficult because we had to go to Frankfort or Louisville.

The television was a lifeline where I could watch films, and I loved playing on that pool table. So when I got to high school, instead of reading books that were assigned to me in English class, I read novels that I wanted to read. And one of those was ‘The Hustler,’ which is Walter Tevis’ first novel. So my interest in Walter Tevis started over 40 years ago. And then, of course, you know, the pandemic hits, everybody’s inside, we’re watching more television than we’ve ever watched before. And bingo, here comes ‘The Queen’s Gambit’ and it’s an absolute success both commercially and critically. And so it seemed like the perfect time to propose a documentary on Walter Tevis to KET, especially since he has such deep Kentucky roots.

Tevis had a life that mirrored his work. Tell me about that.

Walter Tevis was born in San Francisco during the Depression and at age nine, maybe 10, he developed a heart condition and he was placed in a convalescent home in San Francisco, and his parents… they abandoned him there, essentially. They came back to Kentucky and so here’s this 10-year-old kid, and he is all alone. To make matters worse, at that time in the late ‘30s, convalescent homes decided it was best to pump the kids, these young kids, full of barbiturates three times a day to keep them quote, unquote, ‘under control.’ And so, you know, it’s a very tragic story, but it’s obviously something that he worked his way through, especially in ‘The Queen’s Gambit’ through the character of Beth because you don’t have to have a crystal ball to make the connection between Walter Tevis’ upbringing and Beth and what she went through, early in her life being orphaned.

I read about his addictions and thought about “The Queen’s Gambit.”

There was this 17 year drought after he published his novel, ‘The Man Who Fell To Earth.’ Between the publication of that book and the publication of his next novel, which was in 1980, a novel called ‘Mockingbird,’ that’s a very long drought. Um, and during much of that time, he was a professor at an Ohio university. And by all accounts, he was a terrific professor.

He did finally sober up. He went to a treatment center in Columbus, Ohio, and eventually moved to New York and kind of reinvented himself and had this extremely prolific period from 1980 to 1984 with novels like ‘Mockingbird’ and ‘The Queen’s Gambit’ and his last book, ‘The Color of Money, which was the sequel to his first book, ‘The Hustler.’