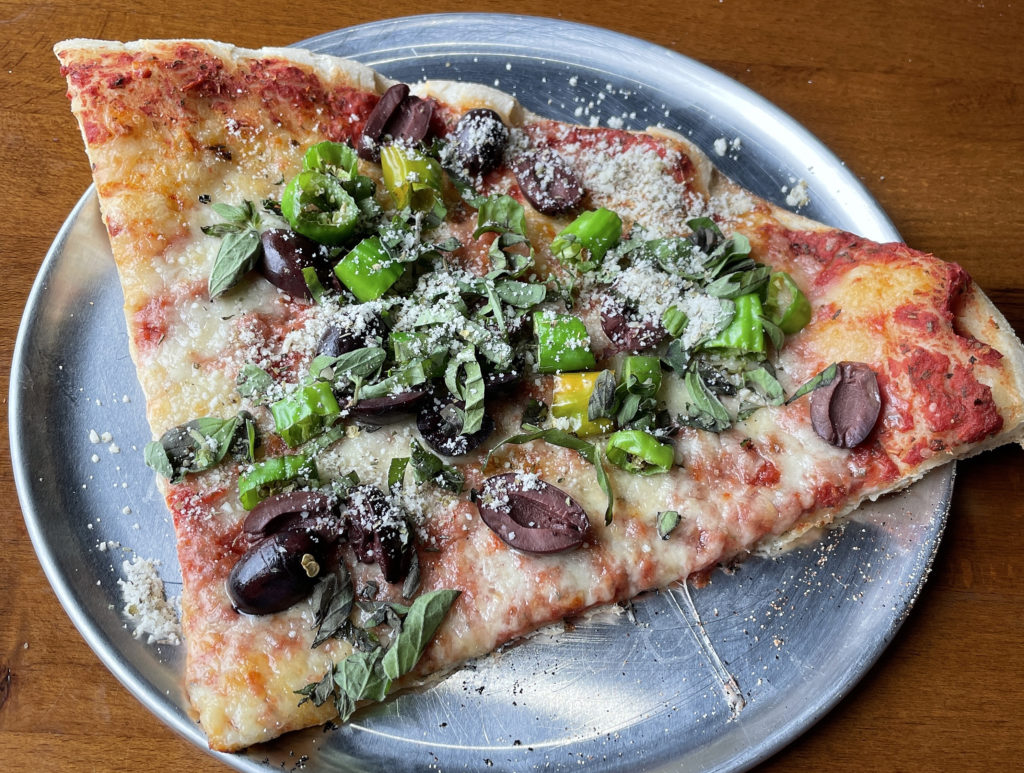 A slice of pizza at Faces. | Photo by Robin Garr.

When Chef Eric Morris opens a restaurant, I pay attention. I loved his Hull & Highwater and Gospel Bird eateries in New Albany, and I loved his citizen journalism and photography during the Breonna Taylor demonstrations (#SayHerName), although that’s another story.

So when Morris opened his eclectic, new spot Faces Bar/Bistro in Louisville’s Highlands last year, I was eager to check it out.

But why did it take me more than a year to get there? Blame Covid-19. Morris planned to open in March 2020, but the pandemic shoved that back to early June with takeout and limited seating. Then the menu seemed to change every couple of weeks as Morris sought the perfect bill of fare. Then, earlier this month, a menu that looked like the real thing, incorporating a concise mix of old favorites and … pizza!

Yep, Faces is a pizzeria now, and more. We dropped in for lunch on a Saturday and found everything just as good as I had hoped, and the brick-and-wood setting with imposing semicircular bar fitting the eclectic mood of the Bardstown/Baxter food-and-drink strip. Suiting the restaurant’s name, the walls are decorated with pictures of, yes, faces, from a youthful Muhammad Ali to a wild-haired Einstein, his face brightened with colorful pastel squares.

Morris’ latest menu offers plenty of pizza, but that’s not all. A half-dozen appetizers are priced from $5 (for Nashville hot corn dogs) to $12 (for vegetarian empanadas).

Five sandwiches range in price from $12 (for spicy fried chicken) to $15 (for braised pork belly).

The pizza menu offers an oversize slice ($5 with cheese) plus nearly two dozen toppings (25 cents for veggies, 50 cents for meat). 18-inch signature pies are $15 (for a cheese pie) and, on the higher end, $25 (for the pork belly “Stelly Belly” with Korean gochujang sauce, kimchi drizzle and more) and $26 (for a vegan supreme with plant-based cheese and meat). There’s also a cheese-and-tomato calzone for $10.

Throughout the evolution of Faces, as often as the menu has changed, you could just about count on veggie empanadas and a few fried chicken sandwich options that recall Morris’ stint at Gospel Bird. Naturally we had to try both, and some pizza too.

The veggie empanadas ($12) make a great starter, with five, two-bite deep-fried pastry pockets lined up in a row for easy sharing. They showed consistent attention to detail that you’ll find throughout Morris’ cooking. They were perfectly fried, crisp and sizzling on the outside, fresh and steaming within. The dark, umami-laced filling contained bits of carrot, potato black beans and more. They were prettily plated in a row with a tiny bibb lettuce salad topped with quick-pickled red onion on one end.

A caesar salad (included as an optional side with sandwiches, $4 as an extra or $8 in a larger portion), was simple but fresh and well-made, with strips of crisp romaine lightly coated with creamy, house-made caesar dressing; grated parmesan; and a variation on croutons, crispy dough bites that reminded me of artisan beer nuts, if such a thing exists.

We took a close look at the Yardbird ($14), which had been Gospel Bird’s signature fried-chicken sandwich, but the words “ghost pepper cheese” put Mary off. The honey dip chicken ($12) offered a piquant but less fiery alternative, particularly with its habanero honey component served in a cup on the side at someone’s — not mentioning any names — request. It’s a large sandwich, a big chunk of fried-chicken breast on a big, attractive, tall-domed bun, and all the parts were tasty. The bun had been grilled on the cut sides until well browned, the base then painted with a layer of sweet white-cheddar pimento cheese — a nice touch. The fried coating was very crisp and delicious with a gentle kick of cayenne, fried dark golden-brown and puffy. Four, thick dill pickles that appeared to be habagardils from Pop’s Pepper Patch dressed the top of the bun, and the habanero honey was delicious, spicy not fiery, a good mix of hot and sweet with a smoky back note.

After all that food, I thought a slice ($4 plus 25 cents each for two toppings) would be enough for me; and this giant slice turned out to be a full quarter of an 18-inch pie. The crust got my attention: crisp and thin, with edges showing the large yeast-bubble holes that signal artisan bread. Thick, flavorful tomato sauce and melted mozzarella were both applied with a discreet hand, not dolloped on; finished with snipped fresh basil. The toppings were good too, although next time I might order something more traditional than shishito peppers and kalamata olives.