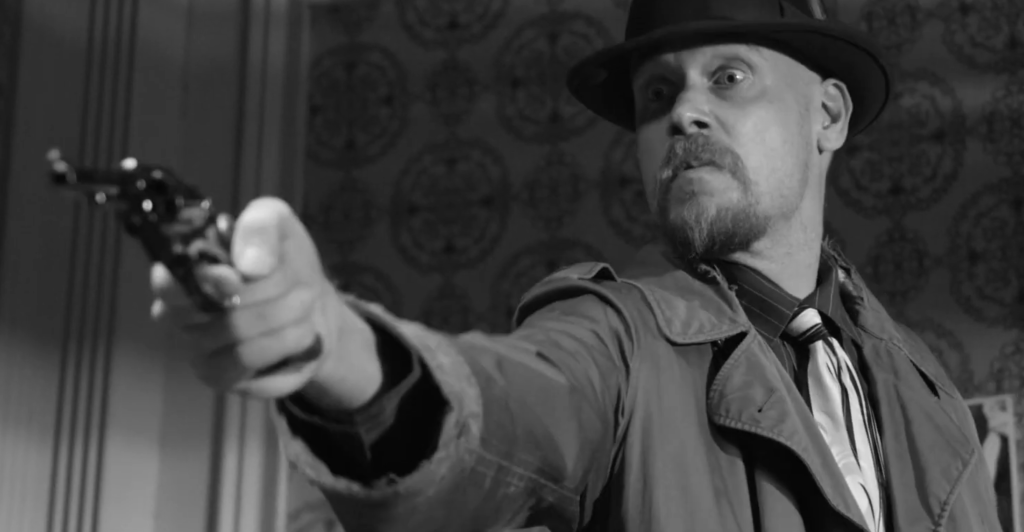 A still from Shane Woodson's new movie, "8 Days To Hell."

Actor and director Shane Woodson grew up in Louisville but, like many talented locals, he packed up his dream and moved west to pursue his career. This week, he returns to Louisville to premiere his latest film, “8 Days to Hell.” The film stars Eric Roberts, Woodson, Tori London and Jennifer Day. It follows several killers as their lives and crimes cross paths.

LEO caught up with Woodson to discuss the film and what it is like being a son of the ‘ville in the acting profession.

LEO Weekly: Tell me about the film.

Shane Woodson: I produced it, directed it, play one of the main roles in it. And, I’ve always loved horror films since I was a kid. Grew up, and read pretty much all of Stephen King’s novels. And I love ‘Night of the Living Dead,’ not a Stephen King one, but Romero and ‘The Shining’ and ‘The Standoff,’ all of those things. So my first movie ever was ‘Night of the Living Dead,’ at a drive-in movie theater.

I was with a friend of mine, a couple of artists out in Los Angeles and one of my best friends, Don Herrion… he’s a painter, and we’d always talked about making a horror film together. So he was exhibiting his paintings. He did a whole series on the Wolf Man and Bela Lugosi’s Dracula. We just started talking, ‘Hey, you know what, let’s do it.’ So we gave ourselves 30 days to write as many fresh stories as possible. And then we took the best eight stories and I said, ‘Well, let’s make this a horror anthology, but let’s make each story uniquely connect to the next until we have a narrative feature and it’ll be, you know, it’ll be interesting that way.’

Tell me about growing up in Louisville.

Oh, absolutely. My father was, uh, he passed away unfortunately, but he was a writer his whole life. He worked at the Courier for a while. He contributed to different magazines around town. And so I was influenced, directly and indirectly, by him. I never thought I would write something, but ended up doing it. And he helped me. He said, ‘Look, you want to have a really good outline. Don’t tell anybody what you’re going to do ‘cause then you’ll talk your ideas out.’

He gave me some great advice, but growing up in Louisville… what a unique, eclectic, very artsy town this is. I always love coming back here. I always think about Louisville when I’m away, and to me, it’s like a racehorse coming back to pasture. I’ve always thought of it that way. It’s like you can come back to care and recharge and be around some good energy and get your mojo back.

I went to the Brown school initially and then I graduated from Atherton and they had a really good theater program there. I wanted to be a racetrack announcer as a kid. And then when I got into the theater class that the rest was history for me, I loved it.

He was super excited and we really hit it off on set. He’s like, “I love you, man. You’re a rebel filmmaker.’

He did a great job and he didn’t want to leave set. He was like, ‘Man, this is, this is fun. You guys are moving lightning fast.’ We got a ton of coverage and he just had a really good time. And I shot his stuff first up because, you know, I’m not worried about any of my coverage.

What’s next after this film?

I’ve got several things. A sequel to ‘8 Days to Hell’ is in the works. We might keep the title ‘8 Days to Hell,’ and then it could be a street or a house. We’re figuring that out right now, or it might be a ‘9 Days to Hell.’  The title is still in the works, but the stories are there.

What I really want to do more than anything… there’s a children’s story my dad wrote that I would love to bring to the screen because it’s such a special, sweet, enchanting, inspirational and fresh story. There’s never been anything like it.