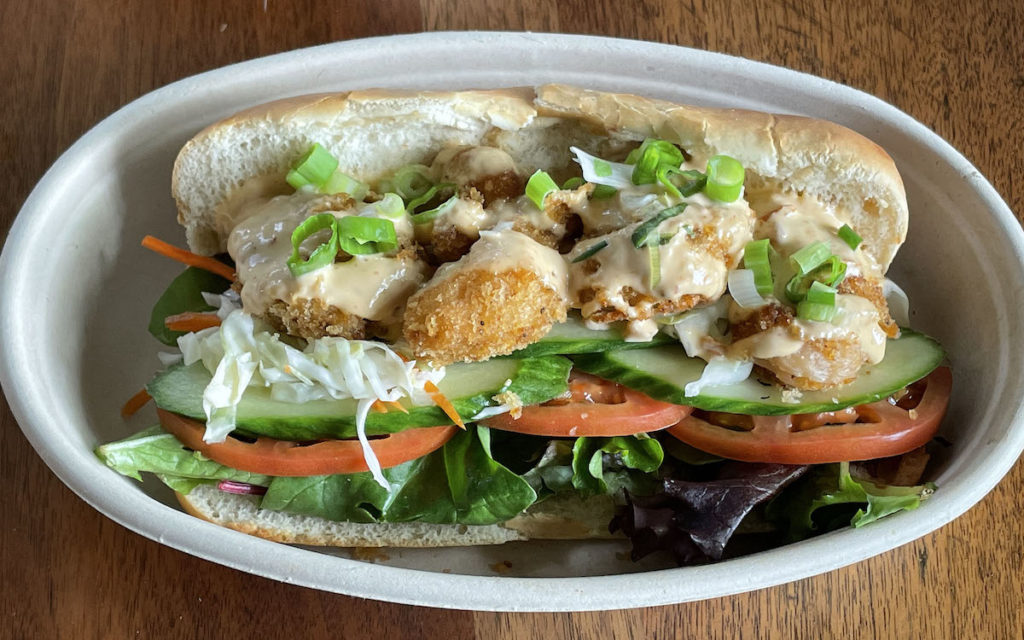 Fried "shrimp" made from konjac, a Southeast Asian tuber, become persuasive in the context of a New Orleans-style po'boy sandwich.

It has been almost two years since a roof collapse abruptly closed four popular restaurants in the Galleria at St. Matthews strip on Oechsli Avenue in St. Matthews.

The roof remains unrepaired, the building is up for sale and litigation is pending. Under the added weight of the COVID-19 pandemic, each of the four eateries — Del Frisco’s, Havana Rumba, Charim Korean Restaurant, and Half-Peach Bakery & Cafe — have struggled to deal with insurance and legal issues as they fought to recover and relocate.

Havana Rumba, luckily, already had plans to move a month before the cave-in. Renamed Mojito in Havana, it opened in the former Boombozz/Waylon’s Feed and Firewater on Shelbyville Road in October 2019.

Charim has yet to reopen, although owner Yeon Hee Chung has periodically provided food at Zanzabar and did a pop-up event at 610 Magnolia. Del Frisco’s was down for more than a year before elegantly resurfacing last November in the former Z’s Oyster Bar & Steakhouse property on Whittington Parkway.

Finally, Half-Peach reopened just six weeks ago in the Mariposa Center right behind its former location. Half-Peach had been wholesale baking in borrowed restaurant kitchen space. A GoFundMe page that co-owner Sue Zhao set up to help cover expenses for its 16-person staff yielded $4,470 of its $8,000 goal. If you’re inclined to help, it’s still open for donations at gofundme.com/f/immediate-help-for-halfpeach-staff)

The new space is tiny, offering only takeout, and it’s currently open only from 4-8 p.m. Wednesdays through Saturdays. I wanted to get over to pick up a meal as soon as I could, and I hope you will, too.

Half-Peach bills its selection as “international vegan comfort food.” The menu isn’t long, and you’ll often find some items marked as sold out. This is the challenge of a tiny kitchen, I’m sure. I recommend patience.

The menu changes periodically, but favorites tend to remain on the bill of fare. Last week’s options featured a half-dozen plates ranging in price from $5 (for a broccoli-apple salad billed as oil-free, gluten-free, and soy-free) to $12 (for four breaded vegan “chik’n” drumsticks fashioned with soy-based protein on a sugarcane “bone” with broccoli-apple salad on the side.)

Six 10-inch vegan pizzas may be ordered either fully cooked or ready for you to take home and finish baking in your own oven. They’re priced from $12 (for a margherita pizza with vegan cheese) to $16 (for a pie topped with avocado pesto salad). Other offbeat toppings include vegan cheeseburger and buffalo chik’n pizzas, both $15.

I find it hard to turn down a taco, so the raw taco salad ($9.50) caught my eye. Billed as vegan, gluten-free and raw, it’s a far cry from Taco Bell, and I’d just as soon have it that way. Crisp, fresh chopped romaine and a ration of kale filled a large, oval, compostable cardboard plate. It was topped with chopped fresh tomatoes, crisp fresh-corn niblets and a pile of fairly convincing taco “meat” fashioned from ground almonds, walnuts and sunflower seeds. Cashew-based vegan sour cream drizzled on top was tasty, but more would have been welcome in a rather dry salad.

I’ll take a shrimp po-boy ($9.50) anytime, even when the “shrimp” is composed of breaded and fried konjac, a Southeast Asian tuber that gets a lot of use in vegan dishes because its flavor picks up its surroundings, and its texture is like, well, shrimp. I’m not going to say it was a dead ringer for the real thing, but in the context of a decent po’boy bun it made me happy. It was nicely dressed with fresh-sliced tomato, cucumber, romaine, organic greens, green onions, a few thick slices of fiery jalapeño and attention-getting sriracha rémoulade.

A spinach artichoke pizza ($14), ordered fully cooked, got home in its pizza box plenty warm enough to enjoy; the leftovers were even better after a pass through the toaster oven. It came on a thin wheat crust (gluten-free available for $1 more) and bore a large chunk of fresh artichoke heart atop each quarter. The pizza was lightly covered with very finely chopped spinach and roasted garlic and topped with a combination of vegan cheeses — house made sunflower-cheese sauce and Violife-brand “parmesan.” It was a decent pizza, and something in the vegan cheeses (probably nutritional yeast) imparted a distinctly cheesy flavor.

No animals were harmed, and that’s a good thing, in a substantial dinner that rang up at $39.21. The online ordering software added a 15% tip and didn’t make provision for more.