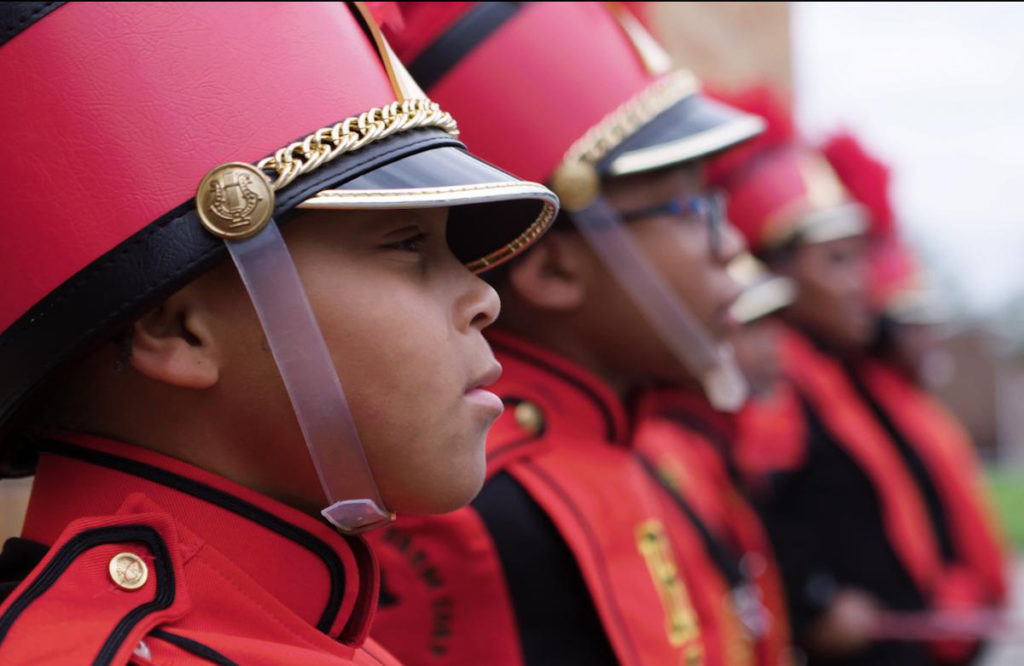 “Everybody is a drummer,” said Albert Shumake, executive director of the River City Drum Corp, “because we are born into the world with this sound.” He tapped a rhythm on a snare drum, beating his hand over his heart.

That’s a moment from the new documentary “River City Drumbeat,” which follows the River City Drum Corp, an organization in Louisville’s West End that turns young people into skilled drumline performers while teaching them life skills and boosting the community. Shumake is the successor to (and former student of) the organization’s founder and 30-year leader, Ed “Nardie” White. The 95-minute film follows the Corp during its yearlong leadership transition while spotlighting three young drummers: Jailen, Emily, and Imani. The movie, which was named a New York Times Critics’ Pick in 2020, will premiere on KET this Friday, June 18, at 9 p.m., and will be available online and on the PBS app.

Although the Corp is a performing arts organization –– it’s hard not to lose yourself in its thunderous beats –– its underlying mission is to promote education. All participants have to maintain a GPA of 2.5 or better to be allowed to perform, and every student has to work his or her way through multiple levels of instruction and practice before he or she can play on the prestigious drumline itself. Within 48 hours of every group event, including performances and field trips, each student is required to turn in a written personal narrative.

Still, at the organization’s core (no pun intended) is a specific focus on promoting and preserving Black cultural heritage. Most, but not all, of the current and former students in the program are Black; the handmade PVC pipe drums that new Corp members perform with are spray-painted in red, black, and green –– the colors of the Pan-African flag. The music they play is based on traditional African drumming, and the Corp holds a bi-monthly class about Black history.

Drumlines have a special significance in Black culture, especially at HBCUs, as highlighted in the 2002 movie “Drumline.” The most recent Honda Battle of the Bands, on which the movie’s climactic final scene at the fictional BET Big Southern Classic is based, brought nearly 60,000 audience members to Atlanta in January 2020. Many Corp alumni are graduates or current students at HBCUs, thanks in large part to mentoring from Shumake and White. (In fact, one of the students featured in the documentary, Jailen Leavell, has since gone on to intern at Ebony Magazine, NBC, and the White House, after graduating from the HBCU Tennessee State University.)

The movie doesn’t hide the difficulties that it takes to reach lofty aspirations, though. Community members discuss racism and economic disparities; White talks about how he was told that he, as a Black man, would never be able to make money in the arts. Students recall teachers who told them they wouldn’t amount to anything and racial slurs heard in their neighborhoods. White discusses using the Corp as a force for good to prevent tragedies like the ones he and his late wife, Zambia Nkrumah, experienced nearly a decade ago: their granddaughter was murdered in an act of gang violence. Shumake credits his participation in the Corp for keeping him from a similar fate as a child.

In one of the movie’s trailers, drummers call and respond together: “I pledge to my ancestors, whose names I may not know, in respect for their great struggles, that I’ll struggle to grow.” The day the movie will premiere on KET is one day before Juneteenth, which commemorates the abolition of slavery in the U.S.

Co-director Marlon Johnson told SFFILM in a 2020 interview, “The drum corps is a strong tree rooted in African-American culture, and its members and alumni are the fruit of that tree.” As White says in the movie, “Our culture is gonna be our savior. If we tap back into that culture, you’ll find out that’s where the power is at.”

In a joint statement, Johnson and his collaborator Anne Flatté said that they hoped the movie “resonates with communities as they do the vital work of raising future generations.” They added, “We believe every child needs the chance to connect with the arts, and this film tells the story of what results when that connection is fostered.”

As a filmmaker, Flatté has a previous tie to music in Louisville; in 2014, she directed the series “Music Makes a City Now,” which profiled Teddy Abrams in his first year at the Louisville Orchestra. Johnson has directed multiple films about the impact of music in other large cultural hubs, including Detroit and Miami.

Although the movie took four years to finish, it had its world premiere in New York City in 2019. Most of it was filmed five years ago. The Corp has continued to practice and perform over the last year, during the pandemic and the events surrounding Breonna Taylor’s murder, albeit within the limitations of COVID.; from March to September of last year, they only held practice sessions over Zoom. Since then, they’ve gone back to in-person meetings — distanced, with masks. In the last six months, they’ve even performed at events with Wynton Marsalis and the Louisville Ballet, respectively.

It is the community, the culture and the Corp that brings the beats back to the city.