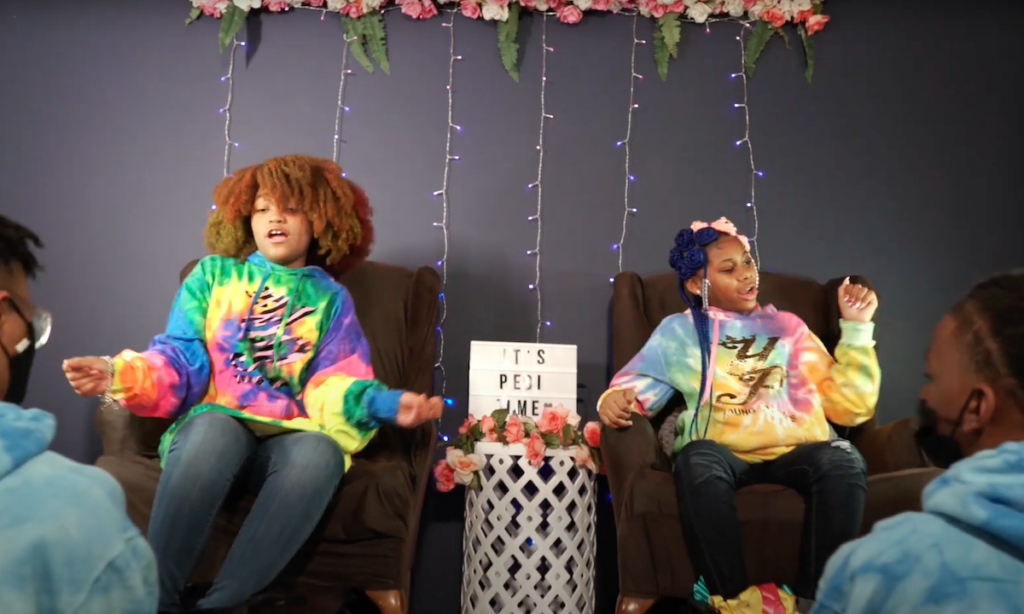 A screenshot from The Real Young Prodigys “Crown” music video.

A group of JCPS students is using hip-hop to push legislation banning race-based hair discrimination — and their efforts have resulted in the introduction of a Louisville Metro Council ordinance.

The Real Young Prodigys, led by teacher NyRee Clayton-Taylor, make music to further social justice issues, and they were working on their latest song — an ode to natural hair — when they learned about the CROWN Act.

The bill resonated with the Young Prodigys, whose members know what it was like to be singled out because of their hair.

Davonn Pitney is 14 and has already had the experience of worrying that her hair will affect how society views her. It first started when she cut her hair off in sixth grade and started nurturing her natural hair.

“If I would wear my hair in an afro like this — because that’s when I started wearing my afro — like there was this, it always felt like this constant expectation for Black women to have their hair in a presentable way,” said the duPont Manual student.

The Young Prodigys, who will be working on their CROWN Act efforts throughout the summer, are pushing to get the legislation passed on the local, state and federal levels. In March, they held a rally in Frankfort to promote state Rep. Attica Scott’s CROWN Act bill, which did not pass. Last week, they met with U.S. Rep. John Yarmuth (and LEO’s founder) to discuss national CROWN Act legislation, which was introduced in March. And, they started a TikTok dancing trend with the help of viral influencers the NaeNae twins, using their natural hair anthem, “Crown.”

But the Young Prodigys might get legislation passed locally first.

District 4 Councilmember Jecorey Arthur was watching as the Young Prodigys presented at Justice Fest on May 22. Justice Fest was a showcase of what students in JCPS’ Justice Now Learning Hub have been working on throughout the year. Young Prodigys member Renee Robinson, 10,  asked why an ordinance hadn’t passed in Louisville yet.

That day, Arthur tweeted that he had contacted a county attorney to draft one.

“What I’m trying to get our young people and especially our young Black people to realize is that you are a policymaker just like I am,” Arthur told LEO. “I’m just one of 26 people that can vote on that policy. But you can help write policy, you can help advocate for it, you can help get it passed, and this is a fine example of that.”

On Monday, Arthur introduced the ordinance, which is now co-sponsored by every Black member of Metro Council, as well as one Republican council member. If passed, Louisvillians could not be discriminated against in employment, housing and public accommodation for wearing their natural hair.

Clayton-Taylor said it would be meaningful to the Prodigys if they could get an ordinance passed in Louisville.

“They’re seeing like, ‘Oh, OK, so there’s three ways that we can do this,’” she said. “So if they do it federally, then they don’t really have to worry about it state and locally. But it’s also good to do something like this. Going through the process is the best understanding how government works.”

In a statement, U.S. Rep. Yarmuth said he would also be co-sponsoring this year’s CROWN Act on the national level.

“It’s common sense legislation to address a deeply engrained form of racism and discrimination that is prevalent in our society today. I’m hopeful that the new Senate majority will join us in approving this important measure,” he said.

Getting the CROWN Act passed locally could help Rep. Scott’s state efforts, she said. Rep. Scott has introduced a CROWN Act bill two times already. It hasn’t passed, but the city of Covington, Kentucky, did pass its own ordinance last year.

“I feel like it’s part of this movement to make it happen across the Commonwealth of Kentucky, so that we build up momentum for it to pass at the state level,” Scott said. “It’s difficult to ignore movements.”

Robinson, one of the Young Prodigys who attends Kerrick Elementary School, said that the CROWN Act failing in the Kentucky legislature this year was actually motivating.

“It was pushing us forward instead of backwards,” she said.

The Young Prodigys help could be important to getting the CROWN Act passed statewide, Scott said.

“You know, young people are connected to one another in new and different ways,” she said. “And so they are going to be talking to their, you know, counterparts at other schools across Kentucky — and their faculty advisors with Justice Now are going to be doing the same thing. So yes, they definitely have the opportunity to have an impact.”

When Scott’s daughter, Ashanti Scott, and her peers challenged a racist hair policy at JCPS’ Butler Traditional High School in 2016, it was quickly overturned. Male High School reversed a similar policy soon after.

“Schools only exist for the students,” Attica Scott said. “And so they put themselves in positions where they were using their social platforms. They were, you know, organizing and talking to one another on Instagram and they were talking to their teachers.”

The Young Prodigys have studied Ashanti Scott’s success. And they have learned about how other students across the country have faced discrimination in schools for their natural hair. Members of the group said that their CROWN Act efforts are for those students — and all students, even those who wear hairstyles not covered in the CROWN Act, like mullets.

“That’s also very tragic because, like I said, you should have your hair the way that you want it,” said Robinson.