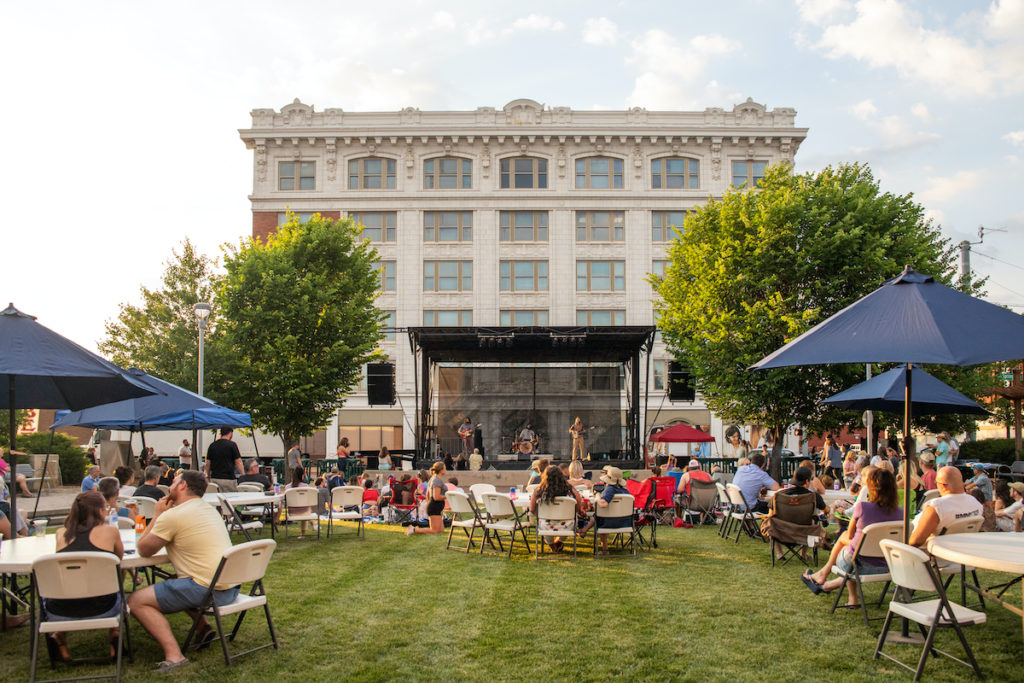 If you’re like us, you’re probably trying to make your way back to regular concert-going after a long year without shows. Still, going back to crowded indoor venues might be an uncomfortable transition, even if you’re vaxxed.

The happy medium: outdoor concerts. Even though Louisville doesn’t have as many this year as we normally do, there are still plenty of good choices to keep you dancing throughout the summer.

This is your guide to Louisville’s best outdoor shows.

LIVE ON THE LAWN AT WATERFRONT PARK

This is the big space for the big names. If you miss the Real Festival Experience ­­— partying with your friends on the waterfront as you listen to hitmakers like ZZ Top, Styx, Nelly, and Shinedown –– this one’s for you.

Some caveats, though –– most audiences at these shows are seated in socially-distanced pods of 4-6 people, so you can’t just jam right in front of the stage like you normally would. The cheapest non-pod tickets are limited and vary from $25-49.50, and you can’t bring chairs, just blankets. (That said, you can get free admission in exchange for some cleanup work after a show. Google “Clean Vibes Louisville” for more info.)

They require guests to wear masks outside of their pods, and there will be hand sanitizing stations everywhere.

Before you hit the big venues, swing by Bicentennial Park for a cozier, more intimate groove with a chill neighborhood-festival feel. The park is a fairly small space, a green oasis in downtown New Albany, but it can fit around 200 people with plenty of room for young kids (and college kids) to dance. The concerts in this series end before sunset, which leaves plenty of time to mingle with the band members and fellow music fans.

If you get there early enough, you can snag a first-come, first-served table with an umbrella, but most people bring their own blankets and chairs. Skyline Chili serves food and drinks on-site, or you can bring a picnic basket. Avoid the hassle of street parking by using the public lot on Black Avenue instead.

JAMMIN IN JEFF AT THE RIVERSTAGE

A 15 minute drive away from Bicentennial Park is the RiverStage, a concert venue with a unique twist: it floats on the river!

You won’t, though –– the audience members watch each show from rows of chairs on the nearby lawn. The space does get very packed, so make sure to arrive with plenty of time to claim your spot. Bring a small cooler to enjoy a picnic in the summer air while you wait for the shows to start.

This concert series is sponsored by three Metro Councilmembers. We do like to critique our city’s elected officials at LEO, but this is one thing they’ve definitely done right!

Enjoy concerts and food trucks every other Friday between now and early August. Upcoming shows include a Beatles tribute band, a few country artists, and a “phonque” trio.

If your appreciation for live music has grown in the last year, bring that love to a place that knows all about growing. The Yew Dell Botanical Garden is hosting local musicians in July and August at very affordable ticket prices.

Drinks will be available (including bourbon, of course), but bring your own blankets, chairs and food. Make sure you don’t miss the free drop-in tours of the garden space starting at 6 p.m. each night.

Who says you have to save the fun for the weekend? This popular concert series on the Big Four Lawn will be your antidote to the mid-week blahs.

WFPK hasn’t announced yet which artists are going to be performing, so we can’t give you specific info about the shows. We can tell you, though, that there’ll be food trucks and a cash bar, and that all of the concerts will follow the most updated COVID protocols.