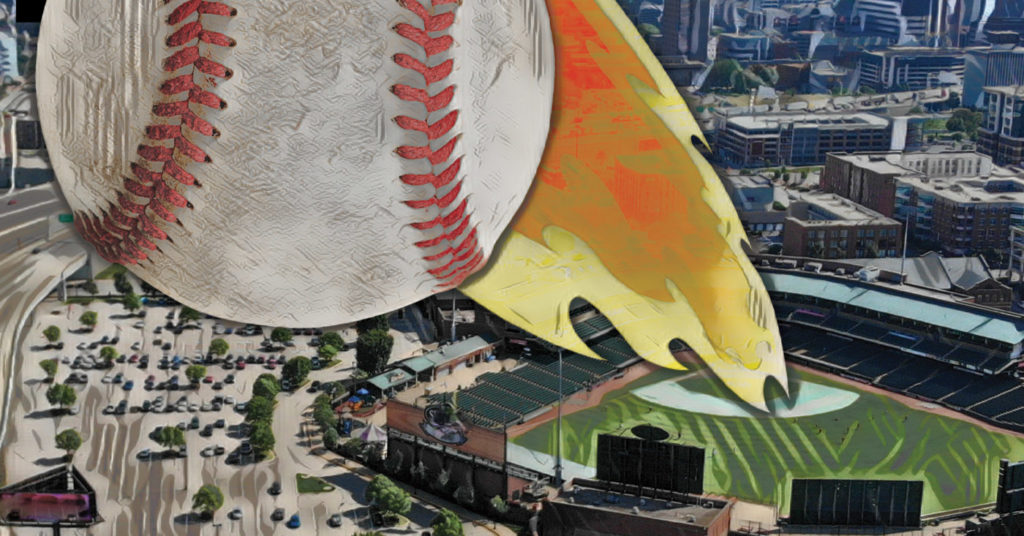 A pandemic came along and baseball — like Broadway plays and cocktails in a corner booth — was pretty much cancelled in 2020. The major league did end up playing an abbreviated schedule for TV broadcast only, with games conducted in front of cardboard cutout fans in empty stadiums. But every minor league team found its season cancelled. The Louisville Bats did not take the field, and local fans never once heard an ump cry, “Play ball!” But a funny thing happened at Louisville Slugger Field while the game was away: An $8 million stadium update that was scheduled to take two years to complete was ramped into high gear and will be completed this season.

“They’re way ahead of schedule,” said Louisville Bats Executive Vice President Greg Galiette. “This project wasn’t scheduled to be completed until next spring, but now it’s going to be done by the middle of July.”

That means fan amenities like two new outdoor bars on the promenade around the park, and a new one overlooking the field from the upper deck, will be coming to life as hot weather arrives and baseball swings into speed. Slugger is currently letting around 5,700 people in per game, and the Bats are currently in the middle of a home stand that lasts through Sunday.

Speeding up construction, rather than going slow in a time of pandemic, and worrisome economic conditions is an interesting dynamic. Not to mention the sudden revamp of the minor league baseball system. But it’s also an indication that minor league baseball can be a very good sports business. Not as big as the NFL or Major League Baseball, of course. There are no billion dollar TV deals in minor league baseball. But Triple-A franchises like the Bats succeed by entertaining fans with live baseball in lively ballpark. As the Louisville Bats have consistently been able to do.

Looking Down The Line

The financial model for minor league teams is fairly simple: Major league organizations provide all the ball players and baseball parts of things, while the minor league cities provide the ballparks and market the games. Advertisers, especially in Louisville, like being a part of the ballpark experience. Everywhere one looks at Louisville Slugger Field there’s advertising signage and in-game promotions sponsored by local and national businesses.

The new outdoor bar in right center field, for example, will be called the Triple Play Bar, creating a sports bar setting. A smaller outdoor oasis across the field has standing counters in place on which to set a drink and look straight down the third base line to home plate. It’s a nice view.

Across the way, Humana is the sponsor of a new covered area, where fixed seats will give way to picnic tables.

Upstairs on the Slugger Field second deck, private box suites are being reconfigured to include two larger suites for group events. Galiette notes that the former upstairs bar offered no view of the game, but now will get a great one.

“It’s going to take your breath away,” he promised. “You come around the corner after getting off the elevator and, boom, there’s the field. It’s such a tremendous view.”

The Bats have also enhanced the playground area for kids down the first base line by pushing the ballpark fence out into territory borrowed from the parking lot to make more room for rides and slides. A section of seats and concrete along the first base side is being removed (still a roped-off construction site) to make way for a terraced grassy berm where families can throw out a blanket under the stars – protected from wicked line-drive foul screamers by netting that now extends up both the first and third base lines.

The netting is an obvious nod to safety. In games earlier in May, this reporter gave the new nets a skeptical tryout from several vantage points. I found the netting is fairly sheer, and after an inning or so I pretty much forgot about it.

Of course, the drawback is the only way a fan can snag a baseball now is if it’s hit over the outfield fence for a home run.

Another feature of the new construction are four new “ribbon boards” around the park. Horizontal message boards devoted primarily to advertising, like those ringing the arena in the KFC Yum! Center. Personally, I don’t care at all for the garish bright lights of ribbon boards, but the Slugger Field versions do include space for the ball-strike count on the batter. That’s an improvement. It’s simpler to see than picking through the pile of numbers on the big scoreboard. You can see at a glance what’s happening at the plate.

Of course, all of those things are changes fans can see. But there’s more happening behind the scenes in what amounts to a total revamping of minor league baseball.

Major League Baseball (MLB) took advantage of the cancelled 2020 season to reshape the minor league system. In December, the big leagues offered selected minor league teams the opportunity to join a new MLB Professional Development League. The primary tenet of the new minor league deal is more control by the big leagues, especially in health and training conditions for the players. Salaries also are boosted.

All invitees, including Louisville, accepted.

The most obvious change is the number of minor league franchises was sharply reduced, from 180 teams to 120. Lexington, for example, lost its Single-A franchise. It just went away. Fresno, California, was shocked when demoted from Triple-A to Single-A, primarily because its ballpark and player facilities weren’t up to standard.

And then there’s the odd happenings in Buffalo, where the major league Toronto Blue Jays are playing their American League season in Buffalo’s excellent Triple-A ballpark — because Canada currently restricts travel into the country from the U.S. because of COVID-19 precautions. Buffalo, meanwhile is playing its Triple-A games in Trenton, New Jersey — which lost its minor league team in the restructure. The deal made with the mayor of Trenton is that Buffalo will wear Buffalo Bisons uniforms on the road and Trenton Thunder jerseys at home.

Of course, there never was much doubt about Louisville. Slugger Field remains a top-tier venue, now in its 22nd season. Plus, Louisville is right down the road from major league parent Cincinnati — which means if a Reds player turns up with a sore arm on Thursday morning, a replacement from Louisville can zip right up I-71 and be in the line-up for the Reds that night in Great American Ball Park.

Proximity is a big part of the restructuring, including clustering minor league cities that are close to each other. Thus Louisville, long a member of the Triple-A International League, with a string of cities that stretched from New England to the Carolinas up to the Midwest, is now more geographically centered to the Midwest. The names of the new circuits are as mind numbing as consolidated high schools. Louisville now plays in the Triple-A East – Midwest Division, which hardly has a ring to it.

A look at a map shows the Triple-A East – Midwest is, indeed, a collection of heartland America cities: Louisville, Indianapolis, Toledo and Columbus (from the old IL) as well as Omaha, Iowa and St. Paul.

Things aren’t set yet in the restructuring. And with MLB owners entering into contract negotiations with players this winter, there may be more changes.

Galiette said the Bats will be ready.

“Memos come down from major league baseball altering certain rules regulations and tweaking this and tweaking that,” said Galiette. “I think we’ll see the full effect of it kick in next year. Right now there’s a kind of grace period to allow the minor leagues toget up and on their feet after being off for a year.”

The Baseball Of It All

One thing Louisville fans would love to see is more talent on the roster — and more victories in Slugger Field.

In the 2000s, talented prospects scorched a path through Louisville on their way up to Cincinnati. Stars like Joey Votto, Jay Bruce and Jose Rijo shone brightly in Louisville, and the Bats competed for International League championships. Adam Dunn breezed into Louisville one June and hit 20 home runs in 55 games — with crowds surging into the ballpark to see Dunn swat “big flys.” A couple of Dunn’s home runs flew clear out of the ballpark, last seen on their way to the Ohio River.

But new management in Cincinnati forgot about stocking its farm clubs with talented prospects, and the wins went away. Cincinnati became a doormat, and the Bats haven’t had a winning season in a decade.

There are signs, however, that a new management team gets it. The Reds currently have two of the hottest pitching prospects in baseball stationed at Double-A Chattanooga. Hunter Greene and Nick Lodolo are striking out opposing hitters in astonishing numbers. In his first pro game, Lodolo, a hot arm out of Texas Christian University, struck out 10 of the 15 hitters he faced in five innings. Greene has been on fire, too. Louisville fans are hoping the Reds will promote one or both to Triple-A Louisville this summer.

A Rally and a Save

In the meantime, Louisville manager Pat Kelly will go with what he’s got, which is a roster of skilled but not star players, many with major league experience. No phenoms.

“I think our strength will be pitching and defense,” said Kelly, who has an outstanding reputation built through 30 years managing. “I think we’ve got some strong arms, especially in our bullpen.”

Kelly tabbed right-handed starters Tony Santillan and Vladimir Gutierrez, and talked about fielders making all the routine plays. It takes a certain touch to manage a baseball club, and Kelly has always had it. He’s a big guy, and calm.

The Bats two best hitters, Mark Payton and Scott Heineman have been called up to the Reds, and the current roster carries very light batting averages, with little power. But on a recent night, the pitching held, the defense held, and the Bats put together a sharp late-inning rally keyed by big hits from outfielders Dwight Smith and T.J. Friedl that brought Louisville a 5-4 victory over Toledo.

In the ninth, Kelly called upon veteran reliever R.J. Alaniz, who has the heat and the savvy to save games. Alaniz, who has pitched successively for a slew of minor league teams, got himself into a little trouble, but knew how to get out of it — especially with the help of a terrific fielding play by catcher Chris Okey. Okey pounced on a squibber down the third base line, whirled all the way around and fired a low strike to first baseman Nicky Delmonico — who snapped the ball out of the dirt a split second before the runner touched the bag.