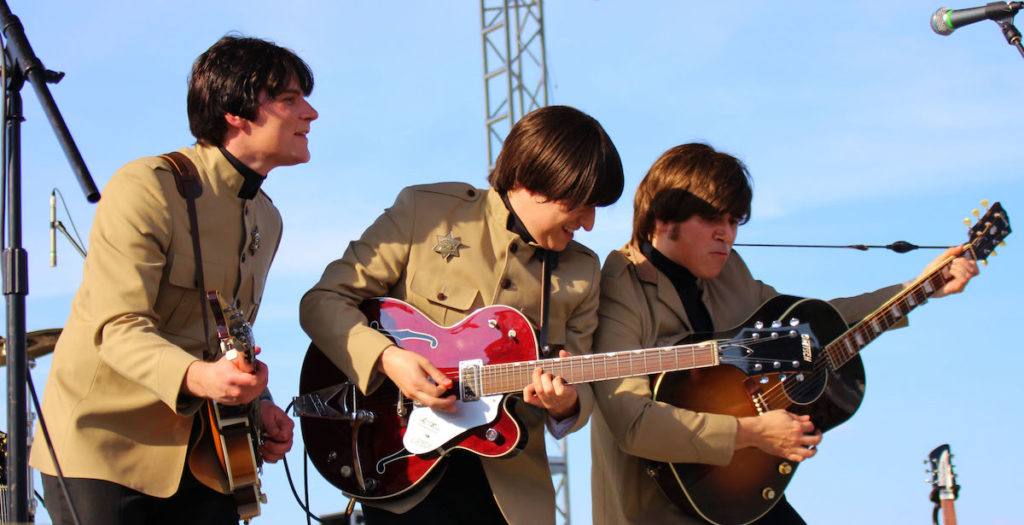 A Beatles cover band performs during Abbey Road on the River.

Abbey Road on the River happens yearly, typically on Memorial Day weekend. This year, the Abbey Road on the River festival has moved its dates to September. Instead of leaving the slot open, the organizers have decided to introduce a new Memorial Day weekend small festival called Penny Lane at the Park. This smaller festival will allow for social distancing, fun and affordability. Event producer Gary Jacob spoke with LEO about the new event and why it was necessary.

“You know, we’ve been three times postponed with the main event due to COVID,” said Jacob. “We were originally scheduled for last Memorial Day weekend and, obviously, we had to postpone it. Then, we rescheduled it for October and nothing had improved by then. Somewhere around February or March, we realized we weren’t going to be able to do May again either.”

The new festival is able to happen, even at a smaller level, because of the space and the level of vaccinations in the community. As more and more people are vaccinated, the ability for festivals and events to take place safely increases.

“As the producer of the event, it kind of pained me to let the weekend go knowing that 80-90% of our customers would be vaccinated by then,” said Jacob. “So I reached out to the city with a different kind of an idea of doing a scaled back, downsized, more socially-distant festival, not even realizing how much better it would be today as when we first started talking to them about it, like six weeks ago.”

The new festival will happen on Memorial Day weekend, May 29-30 at Big Four Station Park. It will officially kick off summer with 10 to 12 bands including The Newbees, kids from Louisville’s School of Rock and — from Puerto Rico — The Jukebox Beatles. The new festival will, like its predecessor, pay homage to the legacy of the Beatles and the music of the ‘60s.

The producers wanted to be sure that this festival offered fans of AROTR something special.

“The idea was to do something small and keep it priced really affordably because we know that people have been through — economically, as well — the worst year and a half of their lives,” said Jacob. “And we wanted to price it in a way that, you know, ‘10 bucks, of course I can afford 10 bucks to see live music again.’”

“We’re maintaining beer at $5, and parking lots that we have control over are $5 so that people can afford to come. And then, from how to stage an event that makes people feel healthy and safe, we, just like everybody else, we just keep following the science.”

For fans of Beatles music, a low-cost, social-distanced, outdoor music festival might be just the ticket to their reentry into the social world. With a $10 ticket price, low cost beer and parking, it should encourage folks to come out. Be warned the festival is also limiting the number of tickets sold to around 2,500 people. This means that there will be plenty of space to “Come Together” without spreading COVID.

Even with COVID cancellations, Abbey Road on the River and Penny Lane at the Park organizers managed to salvage enough funds to boost their offerings with the new weekend.

“We’ve been lucky that probably 90% of our customers that bought tickets for last year have sat on it all through this,” said Jacob. “They have not asked for refunds, they’ve been loyal, and they’ve been waiting for us to reopen. And that’s amazing.”

The festival group is eligible for money through the “Save our Stages Act” but have found it easier to navigate the landscape than many smaller venues and clubs that carry large overhead. Despite being a mid-sized festival event and feeling the sting of the pandemic’s cancellations, they’ve managed to survive the delay in SOS funding which might finally start flowing at the end of this month.

“We’ve been able to negotiate with all of our fans, but if you’re a club that’s trying to book 75 shows into the next six months, and you’d have to put up deposits and with bigger agencies — and you don’t have any cash and you’re waiting for this to come through — it’s pretty depressing.”

But the time for depression is coming to a close for live music fans. As we transition into “living with COVID” we will learn how to create safe ways to share live music again. As long as the weather is good, we have ample outdoor spaces and opportunities but even as venues like The Palace reopen, we are learning more about the ways that — even with COVID — we can, “With a Little Help From My Friends,” be safe. Penny Lane at the Park is trying to demonstrate this and hopefully the fans will appreciate the effort and return the favor by following the festival rules.

Penny Lane at the Park is May 29 and 30 at Big Four Station Park in Jeffersonville, Indiana. Tickets are $10 and children 10 and under are free.