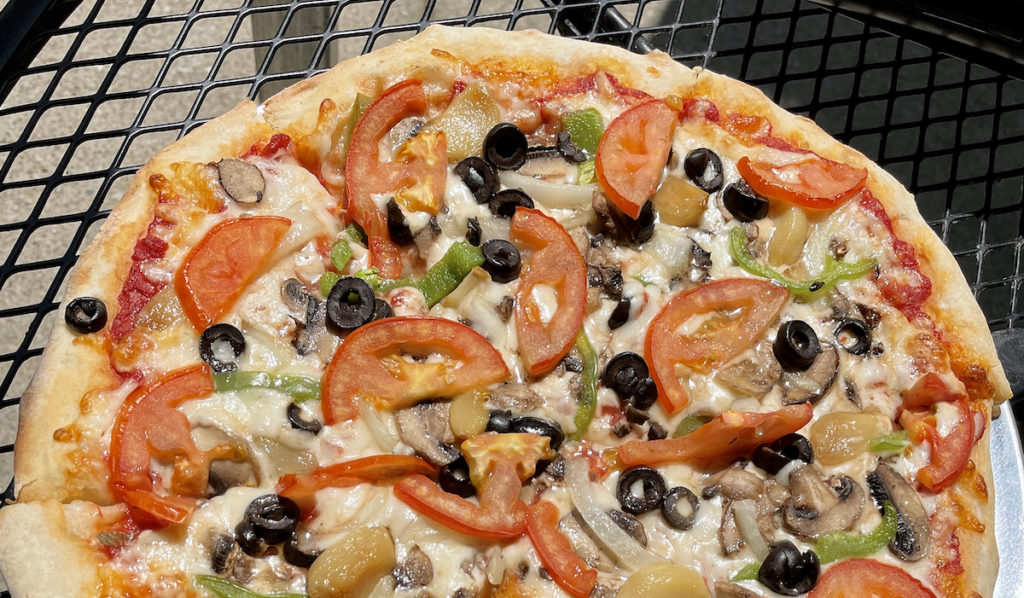 If you can’t make it to Southern Italy to indulge in traditional Neapolitan-style pizza at the source, New York City’s take on pizza is arguably second-best. But you won’t find a better slice in Louisville than at Old School NY Pizza.

A round of thin, crisp crust bearing portions of spicy sauce, melty cheese and toppings discreetly applied so all remains in balance, fired in a high-temperature gas or wood oven until the cheese bubbles: That’s the recipe for Gotham’s finest, and Old School does it right.

I loved the original shop on Factory Lane, although it is quite a hike out there. Now there’s a second location, and it’s out in the far East End, too, filling a storefront in Norton Commons that looks a lot like… well, a Brooklyn pizzeria.

Actually, as I perched on Old School’s sunny patio looking out over Norton Commons’ New Urbanism melange of houses and buildings built in random designs from all over the world — here a Craftsman-style bungalow, there a faux Southern mansion, over there a row of two-story brick apartments that would be at home in Queens, almost — I realized that Old School’s honest Italian-American fare may be one of the most authentic things in the neighborhood.

We chose to dine on the patio, more because it was a beautiful, sunny spring day than out of any pandemic concerns. For the record, servers were carefully masked, although if I weren’t vaccinated I might have been a little uneasy about what looked like rather close spacing among the black mesh tables and metal chairs.

The menu offers a broad selection of mostly standard pizzeria fare. A dozen-plus pre-built pies come in two sizes — 12-inch and 18-inch — and range in price from $10.50 (for a small cheese and tomato-sauce pizza) to $31 (for a large pizza topped with Philly cheesesteak ingredients, something that sounds strangely delicious yet might get one banned from Brooklyn).

Three-cheese calzones are $9; each additional topping is $1. Subs and hoagies on freshly baked bread, including meatball parm, an Italian grinder and a cheesesteak, start at $9 plus toppings. And there’s the usual mix of Italian and Greek-style salads and bar bites as starters and sides.

For a real New York experience, you can get big, foldable slices from 11 a.m.-3 p.m. daily, but we went with a whole small pie instead, and it was very good. Fresh salads and a trio of tasty cannoli for dessert set up a nostalgic al fresco meal that felt almost like being back at our old place in Astoria, Queens, at least for a few minutes.

The salads — a small Greek salad ($5) and a small Caesar ($4.50) — were generously portioned even in the small sizes and made well with fresh ingredients. Served in deep red bowls, both started with fresh, carefully picked-over, squares of crisp romaine. The Caesar topped a full bowl of greens with thin deli slices of mild mozzarella and added excellent crouton cubes cut from bread made in-house. A creamy, garlicky Caesar dressing came in a tub alongside.

Starting from the same romaine base, the other salad turned Greekish with chopped pale tomatoes, crisp and juicy green pepper slices, sliced raw red onions, cubes of crumbly feta and delicious croutons. The traditional olives and cucumbers were AWOL, but a decent vinaigrette in a tub on the side brought it together all the same.

A 12-inch veggie pizza was delicious, and it was New York-style right down to its thin-crust foldable form. Its only fault lay in having been pulled from the oven a little too soon, before the crust was fully crisp and attractively scorched in spots. It was good enough, though, and a trip through the toaster oven for the leftovers at home made it even better.

The crust was appropriately thin to the edge, in contrast with the pillowy, bready edges of Neapolitan tradition. Also as is proper for NYC pizza, toppings were well made but discreetly applied, not overdone. Tomato sauce went down first, just a schmear, and it was nicely herbal and gently spicy. Melted mozzarella and Romano cheeses came next, followed after cooking by mushroom bits, green pepper and onion slices, black olives, roasted garlic cloves and halved sliced tomatoes on top — drizzled with garlic oil to finish.

Our lunch trip to New York for pizza and salad for two, with leftover pizza slices for another day, came to $31.27 plus a $9 tip.