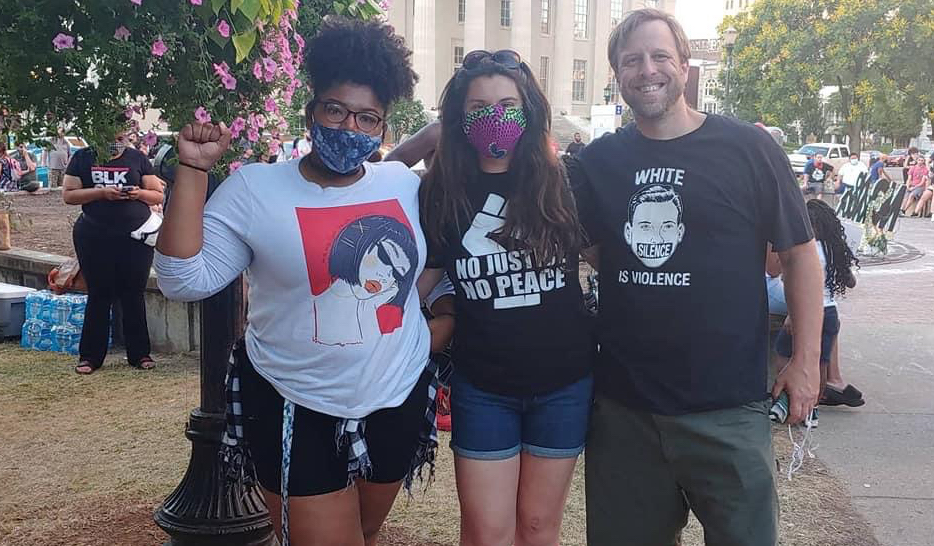 Ariana Tulay, Stephanie Kornexl-Kaufmann and Matt Kaufmann all have had their protest charges dismissed after being arrested in May.

The majority of the cases against people arrested during Louisville’s racial justice protests have been dismissed.

Around 900 people were arrested during the unrest in Louisville, and approximately 600 of those cases have been resolved, according to Ingrid Geiser, the first assistant for the Jefferson County Attorney. Out of those 600, close to 500 were dismissed.

Geiser said that the county attorney’s office is going after cases that hampered community safety while dismissing, one-by-one, cases of people exercising their First Amendment rights of assembly and free speech. But, attorneys volunteering to help protesters pro bono said that a better strategy would have been to unilaterally drop all the charges against legitimate protesters. Protesters who were arrested, even if their charges were dropped, still had to deal with the evils of the criminal justice system, including what they called deplorable jail conditions and the fear (and sometimes the reality) of career consequences.

Tracy Davis, a volunteer attorney who took on the cases of over 100 protesters, is one of the lawyers who would have preferred to see cases unilaterally dropped, although she praised the county attorney’s office for dismissing the cases it has.

“I think that it would have spoke to the community,” she said. “Not people that, you know, are actual rioters or troublemakers or that are there to bring dissension and to disturb, but those who truly set out to find justice and because they wanted true reform with regard to the policies for the police and with regards to sovereign immunity.”

Geiser insisted that it was a good thing that County Attorney Mike O’Connell is deciding what to do with the charges on a case-by-case basis. Some cases, she said, are more serious than others.

“We assigned a team of experienced prosecutors to review these cases, and they have spent hundreds of hours looking at body camera footage and trying to determine who really is a true protester, just exercising their rights, versus who is there to cause some type of disturbance or commit a crime, cause physical harm, cause property damage,” she said. “So, I have to commend our prosecutors. They have looked at all of these cases individually rather than whipping them all into some category.”

Of the cases that were dismissed, many required the protesters to serve 20 volunteer hours, said Geiser. In the case of charges being resolved, but not dismissed, around 60 were guilty pleas.

Of the approximately 300 cases that have yet to be resolved, around 30 felonies have gone to Circuit Court to be screened for indictment. Approximately 33 other cases are out on bench warrant, meaning the accused  have not shown up to court appearances. The rest — around 230 — are in limbo, some delayed by COVID-19, which has played a major factor in how quickly protest cases are being handled. For some of the remaining cases, the county attorney has made an offer to resolve it but that offer has not been accepted yet or the defense has asked for discovery evidence, said Geiser. Courtney Kellner, who is among the 100+ attorneys who have volunteered to represent protesters, said some of the remaining cases will end up going to trial.

The cases that the county attorney’s office is prioritizing prosecuting are violent crimes, property damage and obstruction of a roadway.

There were legitimate protesters who were not using the unrest as a cover for crimes who obstructed a roadway, including those who shut down a NuLu Street in July and demonstrators who overtook the George Rogers Clark Memorial Bridge in June.

Kellner called obstructing a roadway an “outlier,” in the list of charges, but she said the County Attorney’s office did offer volunteer time to some of the protesters charged with that offense, including some NuLu and bridge protesters.

Julie Helman Maldonado, a licensed attorney who is coordinating the lawyer volunteer effort, said she didn’t understand why the county attorney is aggressively pursuing obstruction of a roadway cases over others.

“I don’t know why that’s any worse than anything else, just I mean to me, I don’t,” she said.

But, Geiser said protesters who obstructed roadways were interfering with the right of the rest of the public to travel freely. They were also endangering others, she continued.

“We’ve had some main thoroughfares blocked. It’s a safety concern,” she said. “I mean, there was one instance where one of the ramps, I believe it was 65, was blocked, down near the hospitals. And that ramp is regularly used by ambulances when they’re transporting people to the hospital. So we just can’t have that.”

Chanelle Helm, a core organizer of Black Lives Matter Louisville, is one of those protesters who blocked off the Second Street bridge. She said she wants to take her case to trial.

“We don’t necessarily just want anything on our record, we actually do want to make sure that people know that there’s a reason to fight,” she said.

But, going through the criminal justice system can be a consequence in itself, and even those protesters who were arrested while lawfully exercising their First Amendment rights had a rough time.

Ariana Tulay, 20, a Northern Kentucky University sophomore majoring in political science and philosophy, was arrested in May while trying to depart a protest at which police were deploying tear gas and pepper balls. She and several other protesters could not find a way out, because officers had boxed them in.

She was imprisoned in Louisville Metro Department of Corrections for around 30 hours, one of the last of the protesters arrested that night to be released, because at some point in the process her paperwork had been messed up and her name misspelled.

“I think it’s exhausting because they have such a lack of care for the way that they treat you,” she said.

One of the protesters she was arrested with was Matthew Kaufmann, a former Kentucky Teacher of the Year.

Kaufmann was imprisoned in a jail cell with around 30 other people, which was significant because it was the middle of the pandemic, he said. According to Kaufmann, the cell was not sanitized while he was there, he was denied water most of the night and it was “evident” that the only drinking fountain had been used as a urinal.

Tulay and Kaufmann were both assigned volunteer attorneys, and in November, they were both relieved to have their charges dismissed.

“There’s no reason that we had those charges in the first place,” said Tulay. “So, to have justice done, in a sense, was fulfilling.”

But, Tulay still had to deal with the stress of court dates, uncertainty about the outcome of her charges and the possibility that her future employment could be impacted — all further complicated by her identity as a Black woman.

Davis said she represented one person from out of state who lost a job opportunity. Kellner said other arrested protesters represented by volunteer lawyers had to defer employment and experienced other consequences.

“I mean, think about just what being off 48 hours could do in the life of a parent, you know?” said Kellner. “What do you do with your kids and things like that? I mean there’s a big impact that I’m not sure that we’re really going to be able to put our hands around.”

Kaufmann said that his perspective, and even his career direction, has changed since attending the protests and being arrested. He now believes that money should be reallocated from police departments and invested in the communities law enforcement have harmed, and he no longer supports the presence of police officers in schools. He also has pivoted, at least temporarily, from his goal of being a principal and, instead, has started a Justice Now learning hub at JCPS to “empower students to be the change in the community.”

“My work’s about empowering the next generation to lead, you know?” said Kaufmann. “And then get out of the way and support them however I can. And this summer, my work was to stand beside them and to learn. And I did.”

Tulay works with Justice Now, too. And, after being released from jail, she returned to the Louisville protests on a weekly basis. She wants to continue her activism, at protests and in her future career, whatever it may be. Being arrested was a “call to continue to fight,” she said, because it showed that people in power were more willing to push people through a system that is harmful to Black and brown lives than to take accountability for their actions.