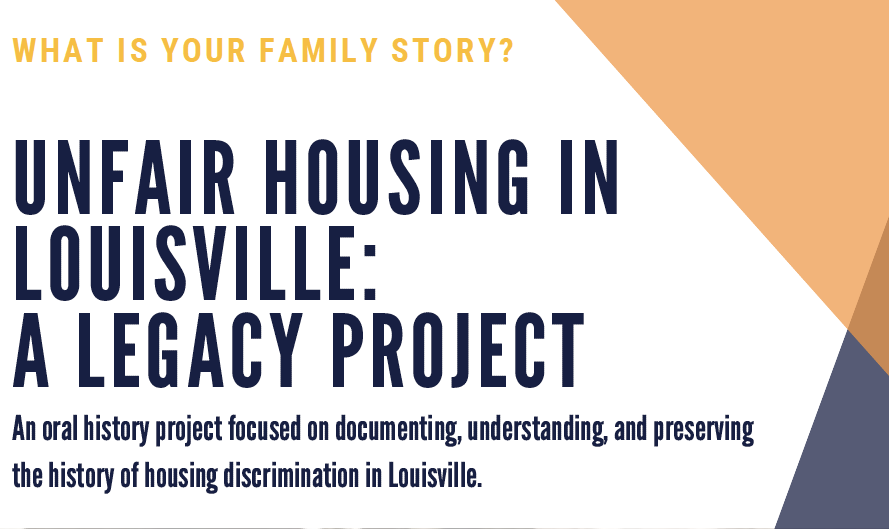 In honor of National Fair Housing Month, the Metropolitan Housing Coalition and the UofL Oral History Center are inviting African American families to share their stories of housing discrimination on April 27 at 5:30 p.m. “Unfair Housing in Louisville: A Community Listening Session” will be an online forum moderated by Riece Hamilton, interim program manager of the UofL Health Promotion Office and vice president of the Black Faculty and Staff Association.

The online forum is a component of “Unfair Housing In Louisville: A Legacy Project,” an oral history project MHC and UofL started in 2020 to document the legacy of mortgage discrimination, redlining and predatory lending practices in Louisville. Because of my experience covering housing issues, particularly the revitalization efforts in the Russell neighborhood, I was hired to conduct the interviews for the project, which received a grant from the Kentucky Historical Society.

Tony Curtis, MHC director of development and communications, said “Unfair Housing in Louisville” is an extension of the organization’s “2019 State of Metropolitan Housing Report,” which focused on racial disparities in home ownership in the city.

“In our conversations with community members and policymakers, we heard the personal stories of individuals and families who have faced housing discrimination for generations and how that discrimination has affected each succeeding generation in building intergenerational wealth,” Curtis explained. “These conversations drove MHC’s decision to launch an oral history project that will document and preserve these family histories, as they are critical both in understanding Louisville’s history and informing the path forward.”

Louisville’s history of housing discrimination can be traced back to 1914, when the city passed a law that barred Blacks and whites from moving onto a block with homes that were predominantly occupied by people of another race. An African American journalist named William Warley and a white realtor named Charles H. Buchanan challenged the law. Warley arranged to purchase a home from Buchanan, but refused to make the final payment because he would never be allowed to occupy it. Buchanan sued Warley to force him to complete the agreement. The U.S. Supreme Court overturned the Louisville ordinance in 1917. However, rather than ending racial segregation in housing as the litigants intended, it led municipalities to develop subtler discriminatory tools to achieve racial segregation in housing.

In 2019, the MHC found that only 36% of Black households own their homes compared to about 70% of white households. This statistic led to the oral history project. MHC and UofL have created an advisory committee to oversee my work. Members include: Art Crosby, executive director, Lexington Fair Housing Council; Catherine Fosl, faculty-director, UofL Anne Braden Institute for Social Justice Research; and Sadiqa Reynolds, president and CEO of Louisville Urban League. The interviews from the project will ultimately be stored at the UofL Oral History Center.

“The University of Louisville Archives & Special Collections is glad to preserve and provide access to this collection of interviews which complements many other community collections in our care related to housing, civil rights and the Black community,” said Heather Fox, the oral history center’s director.”

“Unfair Housing in Louisville: A Community Listening Session” will take place on April 27 from 5:30 p.m. to 7 p.m. via Zoom. If you would like to attend or share your story of housing discrimination, please register at tinyurl.com/Unfair21.