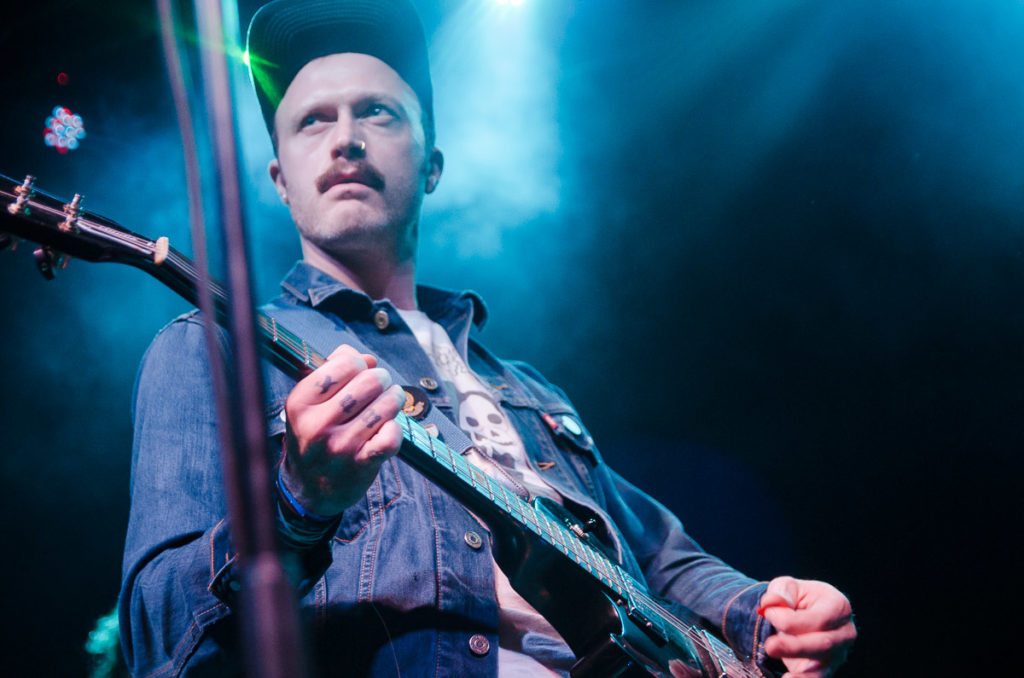 Shadwick Wilde of Quiet Hollers, who will play a concert in May at Headliners Music Hall.

Before the pandemic, there were dozens of concerts on any given week in Louisville, from giant arena shows featuring nationally-touring household names, to buzzy mid-sized acts playing ticketed standing-room shows, to hip dive bars where a $5 cover allowed you to see the latest promising bands that only recently released a demo. Last March, that all came to a screeching halt. Sure, since then, someone managed to pull off an outdoor show here, and some other bar didn’t give a fuck and violated mandates there, but, for the most part, live music in Louisville has been sleeping.

Now, for the first time in more than a year, it’s waking up.

In the world of local independent venues, Zanzabar has been hosting indoor, socially-distanced shows (with the next being Old Dog String Band on April 16), Headliners has a six-concert series planned for May (including Quiet Hollers and Carly Johnson), while other spots like Art Sanctuaury, Mag Bar and others also have plans in the works.

Additionally, this week, Danny Wimmer Presents — the California-based company behind the Louisville festivals Bourbon & Beyond, Louder Than Life and Hometown Rising — has announced a concert series at Waterfront Park, featuring up to 15 live events, beginning in May, with few other details such as artists, dates and pricing currently available.

In even more good news for the industry, earlier this week Gov. Andy Beshear announced that once Kentucky hits 2.5 million residents receiving at least the first shot of the vaccine, he will lift most capacity restrictions on bars, venues, businesses and events, which would have a substantial impact on live music.

All together, this means that concerts are slowly coming back, and there should be many more announcements moving forward, but let’s take a look at two of the groups leading the charge during this first wave.

Before the pandemic, there wasn’t much communication between local venues. Some of them knew each other, a few of them occasionally worked together, but there wasn’t a whole lot of collaboration. Because of the unprecedented hardship of the pandemic, Louisville Operating Venues Safely, or LOVS, was formed, which is a collective of area venues including Headliners, Zanzabar, Art Sanctuaury, Kentucky Performing Arts, Black Complex, Parkland Plaza, Mag Bar, Third Street Dive, The Limbo and others.

The primary goal was to set a standard of health guidelines that will be unilaterally enforced at each venue, but the group has also worked to help each other with a range of challenges, including licensing issues, obtaining government money and innovative ways to increase revenue streams.

Now, they’re realizing their goal of bringing back concerts. But to do so efficiently and safely, LOVS founding member Scotty Haulter said it’s important for both the venues and the fans to honor the new measures.

“We need to collaborate together to make this happen, to ensure a safe environment so we can continue to do shows and open up safely — it’s got to be everybody doing their part,” he said.

Ubiquitous safety protocols will include masks, social distancing and reduced capacity, and most venues are doing seated tables, or pods, where fans stay with the group they arrived with. Zanzabar, in normal times, holds around 350 people, but when they began having sporadic concerts again on Jan. 22, capacity was limited to less than 60, all seated. When Headliners opens back up on May 14, its concerts will be held in the parking lot, with four-person pods and a cap of 356. During COVID, Art Sanctuary has been doing a livestream event called Late For Dinner on a weekly basis, which features performances by local bands. There has been no in-person audience for the series so far, but Art Sanctuary President Lisa Frye said they’re targeting to add a few fans in late May. And LOVS has helped accelerate that process, especially with other venues in the group already hosting and booking shows.

“We’ve talked about all the ways we’re going to make sure things are safe, and to see how they’ve implemented that in their spaces — the way they have the tables and how some of them have pods — that’s been really good to see how that works in advance.”

Mag Bar is planning on doing some outdoor shows soon, but they have no intention on holding indoor shows until the fall.

“We’ve been talking about dipping our toes into some small, acoustic outdoors shows for the summer,” said Allison Longino, who manages Mag Bar, which is on the smaller scale of venue. “We don’t feel super comfortable doing things indoors just yet, but it looks like things are going to open up sooner than expected.”

It’s a turn from the metal, punk and hip-hop shows that Mag Bar used to have, but it’s a reminder that every place is different in space, capabilities and many other factors in a weird time.

Although everyone is moving toward opening but at their own pace, Haulter said the LOVS venues will share results and information that will allow everyone to continue to advance.

“Moving forward, we now have this strong family, where we will continue to communicate and continue to support each other as we reopen,” Haulter said. “We will share ideas on how everyone’s night went. How are your shows going? What can we learn from these? That’s my ideal situation. It’s a resource.”

LOVS was initially born out of the national movement Reopening Every Venue Safely. Michael Bracy, founding member of REVS, is impressed with Louisville and LOVS.

“Louisville is ahead of the curve because of LOVS and, not to be political, but Kentucky has a governor who is attempting to take this seriously,” Bracy said.

Last year, Danny Wimmer Presents canceled all three of its festivals in Louisville, but earlier this year the company announced it will host Louder Than Life in 2021 on Sept. 23-26.

Although, the real surprise came this week when it announced its new pop-up concert series Live On The Lawn At Waterfront Park, which is slated to begin next month, although no exact dates have been announced. According to a press release, the series will feature “prominent touring acts across multiple genres” and there will be several safety measures, including spaced-out pods that will hold 4-6 people.

“While we’ve safely been hosting millions of people throughout the pandemic, this signals a turning point for the park in terms of a return to much-needed revenue generation,”  Deborah Bilitski, president/executive director of Waterfront Park, said.

Danny Wimmer, founder of DWP, said that the company worked with the city government to make the new concert series a reality.

“Louisville has so much to be proud of and excited about for the future, and we’re thrilled to help play a small role in promoting a greater sense of community through live music with our new Live On The Lawn series,” he said.