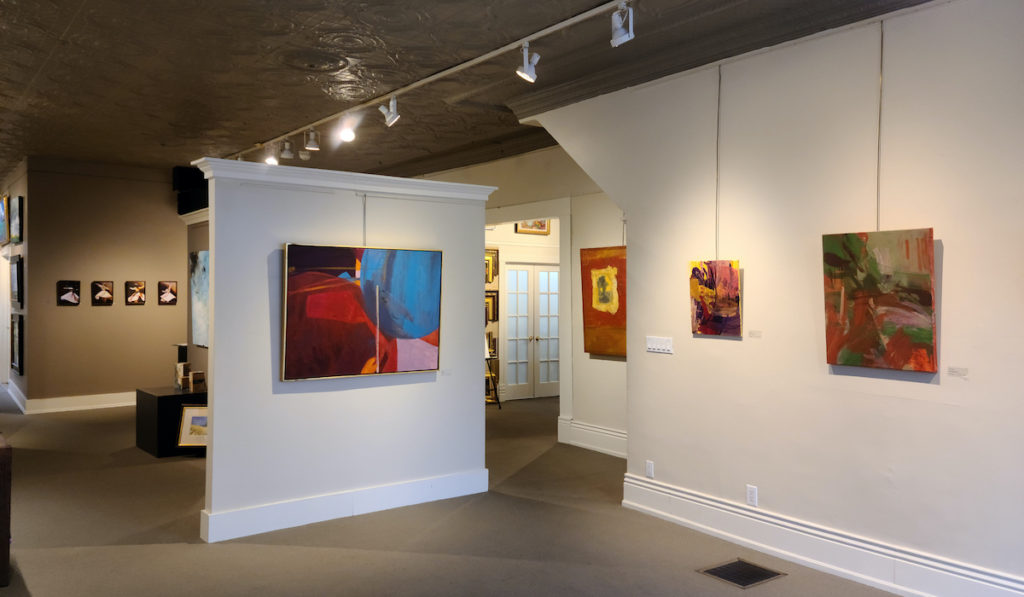 The art framing business has been booming during the pandemic. Daniel Pfalzgraf, owner of WheelHouse Art, supposes that’s because people have been trapped in their houses, staring at their walls.

Pfalzgraf bought the B. Deemer Gallery from Brenda Deemer earlier this year after having spent eight years as a staff member there before leaving to do curatorial work at The Green Building, Zephyr Gallery, the Speed on Market, and eventually the Carnegie Museum for Art and History in New Albany. His return to the traditional gallery and framing business is marked by his creation of a new brand, WheelHouse Art, that will cover a different and distinct kind of work.

“I’ve always thought of myself as a dot-connector,” Pfalzgraf said. Leaning on this skill, he’s looking to make WheelHouse Art a “comprehensive art hub” for the city to make it easier for people to participate in the art world.

That means if someone is looking to buy art, have art framed, professionally hung, resold, shipped, appraised or restored, it can all be done through WheelHouse Art, either in-house or on the rare occasion through subcontractors. He didn’t call it “one-stop shopping,” but that’s definitely the vibe.

Pfalzgraf’s goal is to “remove the barriers to experiencing art.”

In service to that goal, he’s just launched a new website, which he designed himself, that makes it easier to access the art and framing parts of the business. He hopes the site will help expand his market.

Looking to the future, Pfalzgraf’s WheelHouse Art plans on offering digital art as well and perhaps, with help from investors, WheelHouse will step into the crypto art marketplace in the next few years.

Crypto art is a category of art related to blockchain technology and is digital art that is published in the form of a non-fungible token (NFT) directly to the blockchain. In this way, purely digital artworks can be bought, sold or collected by anyone in a decentralized manner. Crypto art is burgeoning business during the pandemic, sometimes to an almost baffling degree.

On March 1, Reuters reported that in October 2020, “Miami-based art collector Pablo Rodriguez-Fraile spent almost $67,000 on a 10-second video artwork that he could have watched for free online. Last week, he sold it for $6.6 million dollars.”

One of the boons of digital art is that it is often open to “smart contracts” which means that in the purchase agreement for a piece of digital art there can be a stipulation that the artist always gets a commission whenever the art is resold on the secondary market. Typically, in the secondary markets of traditional, physical pieces of art, Pfalzgraf said, artists“get screwed.”

Pfalzgraf hopes that he can start paying royalties on the secondary market for traditional art as well.

“Connecting the dots” between art and new markets is not new for Pfalzgraf. One of his most noteworthy accomplishments was spearheading the Flow skate park on the New Albany riverfront. Pfalzgraf said that he wanted to use art to improve the environment of New Albany, improve the skate park space and get people out and gathering. The New Albany Flow Park encourages “athletic and creative type of activities.”

As the curator at Carnegie, Pfalzgraf took advantage of a 2010 initiative to create public art in New Albany. He saw that Gen Z was putting more value in experiences than in static art. A lifelong skateboarding enthusiast, Pfalzgraf directed the partnership between the Carnegie and the City of New Albany and others to revitalize the dilapidated riverfront skate park, built in the mid ‘90s.

At every step of the planning and design, Pfalzgraf and Hunger Skateparks, out of Bloomington, Indiana, engaged with the people who would use the park. Previous city/museum partnerships in public art resulted in smaller, less permanent pieces — The New Albany Flow Park took four and a half years to plan and build, and Pfalzgraf expects it could last 20–30 years with regular upkeep. The $500,000 project continues to attract a conservative estimate of 6,000 people each year — diverse people, people not targeted by the traditional art world, typically.

Expanding the diversity in galleries — both in artists and in customers — is a work in progress, said Pfalzgraf. In addition to becoming an art hub for the city, look for B. Deemer/WheelHouse Art to be expanding its roster of artists, marketing to new audiences, and broadening its appeal beyond clients who feel safe in “their own bubbles” in the near future. “It’s good business,” he said.