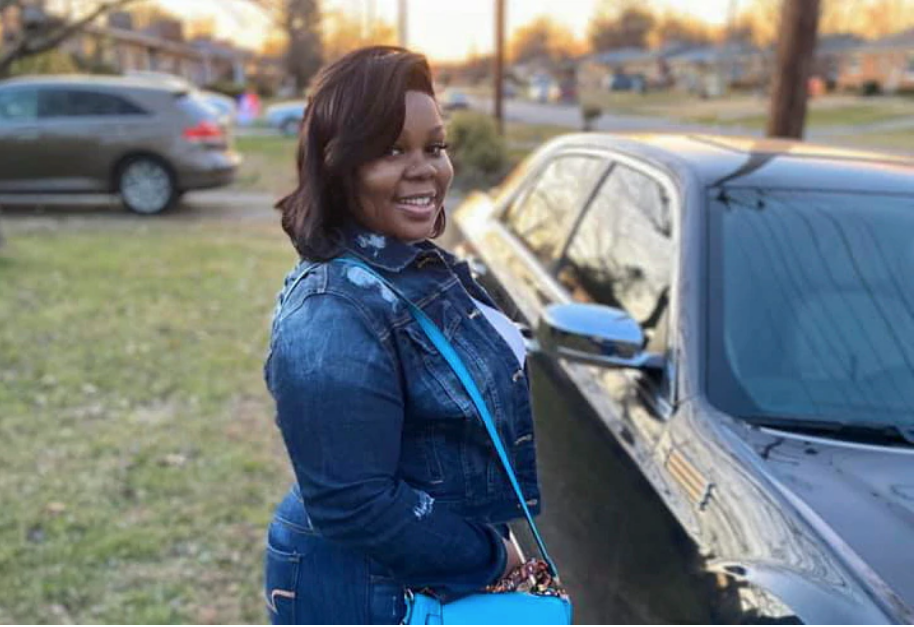 Tamika Palmer stared at the framed ordinance in her hands, smiling down at it as she stood in front of Metro Hall, while a group of protesters cheered from below the building’s steps.

It was June, and the Louisville council had just passed Breonna’s Law — a ban on no-knock warrants in the city — in response to the death of Palmer’s daughter, Breonna Taylor, who was killed by Metro police three months earlier after they obtained a no-knock warrant to raid her home.

“She had the agenda to save lives,” said Palmer, referring to Taylor, who was an ER tech with dreams to become a nurse. “And this law’s going to help her do it,” finished Palmer.

Keturah Herron, an ACLU of Kentucky policy strategist, stood with Palmer. She had been working for weeks with the council to get Breonna’s Law passed. And she was about to embark on a more arduous journey: ushering through a bill changing Kentucky’s no-knock warrant policy statewide — another Breonna’s Law — in honor of Taylor and her calling to save lives.

Two bills emerged: House Bill 21, from Democratic state Rep. Attica Scott, which closely adhered to the Louisville ordinance: An all-out no-knock warrant ban with other “police accountability measures.” It bears the name, “Breonna’s Law.” The other, Senate Bill 4, by Senate President Robert Stivers, R-Manchester, would limit no-knock warrants to terroristic situations or circumstances for which the perpetrator could be charged with a violent crime. It is not named after Taylor.

What kind of final bill would honor Taylor’s memory? It might be one that combines elements of both.

“I think, at the end of the day, we just want to make sure that there is strong legislation that happens to make sure that no one else is susceptible to the circumstances to where Breonna Taylor was murdered,” Herron said.

On Wednesday, HB 21 was essentially declared dead. House Judiciary Committee Chair Ed Massey said there was “realistically” no time for the bill to pass. But, at the meeting, Scott sat next to Sen. Stivers, and said that the two would continue to work on amendments to SB 4.

“For me, that’s what we’re trying to exhibit here today is coming together to figure out how we can come up with a good bill that will make a difference for the people of Kentucky,” said Scott. “And so the folks that I know I have been out on the frontlines with, will no longer feel ignored or silenced or forgotten.”

In addition to limiting the circumstances for which a no-knock warrant can be obtained, SB 4 requires a supervising officer or the agency’s highest ranking officer to sign off on the warrant. It also requires officers to wear body cameras while executing a no-knock search warrant. The officers executing the warrant would have to be part of a SWAT or special response team. The legislation also would reinforce laws that make it illegal for officers to lie in a no-knock warrant application.

Sen. Stivers did not return a request for comment from LEO, but his Democratic co-sponsor, state Sen. Reginald Thomas from Lexington, told LEO that he believes that if SB 4 had been a law last year, Louisville officers wouldn’t have been able to obtain the warrant that led to Taylor’s death.

Last week, Scott told LEO that SB 4 failed “to live up to what would be a real and true Breonna’s law.”

Scott thought the “numerous exemptions” for obtaining no-knock warrants were “a concern.” Stivers’ bill is not likely to turn into a no-knock warrant ban, but there were other issues of police accountability addressed in HB 21 that are not yet addressed in SB 4. Scott’s bill required drug and alcohol testing for officers if they’re involved in a deadly encounter. And, it mandated that officers wear active body cameras all the time on-duty.

At the Judiciary Committee hearing, Stivers said he would be “amenable” to discussing one compromise: An amendment mandating that emergency services be on-call or in close proximity during the execution of a no-knock search warrant.
One change that is important to both Herron and Scott is that a final bill be named after Breonna Taylor.

One example of this, Scott said last week, was when Sen. Stivers did not say Taylor’s name while presenting SB 4 to the Senate Judiciary Committee, instead referring to her as a “young lady.”

“And not even titling that bill Breonna’s Law, which is what people have been crying out for for months, is an absolute slap in the face to her family and to this movement, for justice for Breonna Taylor,” said Scott.

Stivers did invoke Taylor’s name when offering up the bill for a full Senate vote. He said Taylor was deprived of her fundamental rights when she was killed as the result of “bad” and “misguided” policing. But, Stivers did not change the name of the bill.

“To me, we can’t bring Breonna Taylor back,” said Herron. “And so I feel like the next thing to do is how do we make sure that we honor her legacy. And so absolutely the naming, of her, especially here in Kentucky, of any legislation is important.”

But what does Taylor’s family think of the efforts to regulate no-knock warrants in Kentucky?

When Stivers presented his bill to the Senate on Feb. 25, he said that he had talked to the attorney representing Taylor’s family, Sam Aguiar. Aguiar had complimented the bill and called it well-crafted and more holistic than some bills he had been involved in creating, Stivers said.

In a virtual Hood to the Holler forum on Feb. 10, Aguiar talked about HB 21, saying that Palmer closely follows the progress of all legislation regulating no-knock warrants across the United States.

“She smiles and sheds tears every single time this type of legislation is passed around the country and it’d be a damn shame if it keeps getting passed in other places and can’t get passed here,” he said.

“We also need to ask ourselves, why aren’t they down for what we’re proposing?” he asked. “Because it’s really, I mean, I’m a little biased, but it’s really reasonable and it’s much needed reform.”

Last Tuesday, a caravan of cars met at Jefferson Square Park in downtown Louisville and drove to Frankfort for a rally in support of the bill.

Palmer, Taylor’s mother, was there. She addressed the crowd, which was smaller than the one she spoke to this summer in Louisville but still energized. “Who’s law? Breonna’s law,” they shouted.

To them, Palmer said, “We just gotta keep pushing for it and keep doing what we gotta do.”