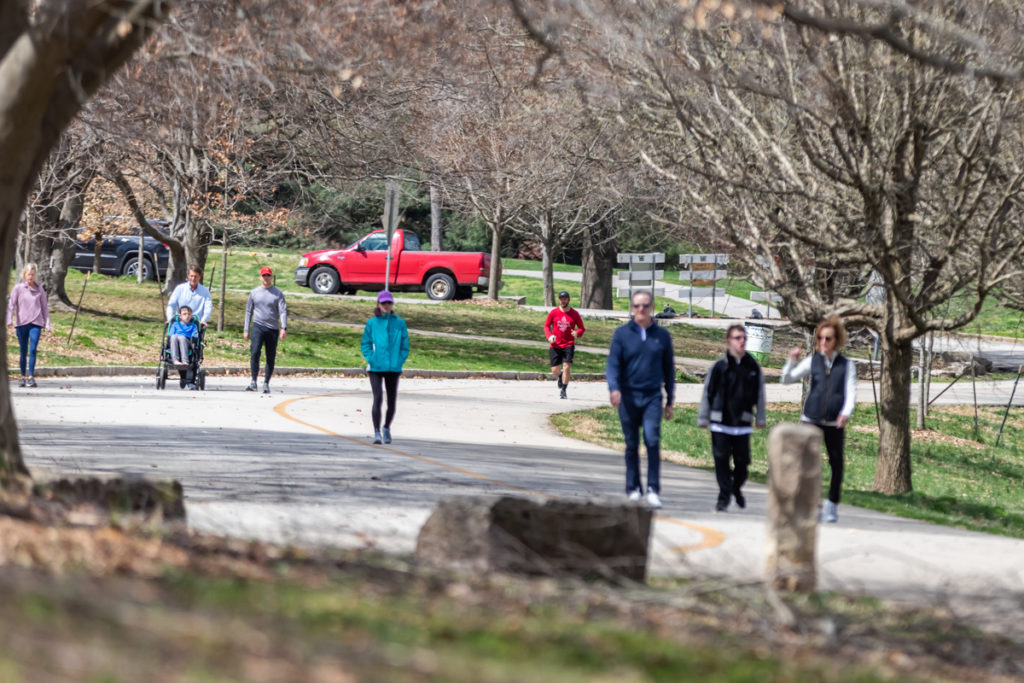 Pedestrians using both sides of the road on the Scenic Loop in Cherokee Park.

Page packer, 34, has all of Louisville’s parks mapped out in her mind based on whether they’re accessible for her 6-year-old daughter, Claire Parker, who has cerebral palsy and uses a walker and sometimes a wheelchair.

Brown Park: Good, because its playground surfaces are rubber.

Tom Sawyer: Not so great, because it uses mulch.

A new proposal to keep most of the closure of Cherokee Park’s loop to cars permanent would knock it down on Packer’s list of most accessible parks. That plan, which has not been finalized, would reopen one section from the Eastern Parkway entrance, up toward Hogan’s Fountain and ending at the Dingle/Cherokee Road entrance. Metro officials say the idea is a compromise to keep the safe environment cultivated during the pandemic, while also making sure the park is still accessible for those with mobility issues. Hogan’s Fountain, which features a playground, a splash pad, picnic tables, a shelter, basketball court and a sports field, is a popular gathering spot, but it’s an uphill walk both ways to get there with the road closed.

“I think, in part, this was designed, the sort of way that the proposed road configuration is right now, is designed to make sure that either people with disabilities, people with mobility issues, people with young children do have access to a lot of those amenities,” said District 8 Councilperson Cassie Chambers Armstrong at a virtual public Parks and Recreation meeting about the Cherokee Park loop. “Because we don’t want to be creating a system where we’re excluding members of our communities from the amenities that we want them to be enjoying.”

Packer sees the plan as a half-measure.

“It would be helpful, but large portions of the park would still be inaccessible to us,” she said. “We probably wouldn’t go as much.”

The city is also mulling the permanent closure of the loop at Iroquois Park. This is not as much of an issue for those with mobility issues, say some park advocates, because important Iroquois amenities, such as its playground and amphitheater, have nearby parking. But, there are still those who use the loop for leisure driving, or — for residents — as a cut-through.

The majority of feedback from park users since closing the Cherokee Park loop at the beginning of the pandemic has been positive, said Layla George, executive director of Olmsted Parks Conservancy, in an interview with LEO. The city decided to build on that public input by sending out a non-scientific survey to help determine the loop’s future, said Louisville Forward Co-Director Jeff O’Brien at the virtual meeting.

Out of 7,234 survey responses, 67% approved of a permanent closure and 32% did not. A smaller percentage, 62% said they would support a partial reopening at Hogan’s Fountain, while 37% said they would not. The survey was only publicly promoted for one week: Louisville Parks and Recreation posted the survey to its Facebook page on March 12, and the deadline to respond was March 19. The survey was not meant to be the end of public comment on the proposal, city officials said. The city is still collecting opinions and will likely make an internal decision sometime this spring, Margaret Bosko, the assistant director for Louisville Parks and Recreation, told LEO.

One group that has benefited from the loop closure is parents with children who are not disabled.

Chris Glasser, the director of Streets for People, a Louisville nonprofit that advocates for redesigning roadways to make them more pedestrian and bike friendly, said that personally, he feels safer taking his two, small kids to Cherokee Park since the closure of the loop.

“If kids can’t run free in a park, because you’re worried about them getting mowed down by a car, that’s not a park experience,” he said.

But, Glasser also had concerns about the park remaining accessible to people who are more dependent on cars. So, after the city’s survey went up, he drafted a “car-muted” plan that would open up the loop near parking areas. Like the city’s plan, it would allow car access near Hogan’s Fountain, although it would start where Barney Street intersects with Cherokee Road instead of from Eastern Parkway. The main difference is that Glasser’s plan would open the loop near the rugby field.

“In my mind it serves as a middle ground between allowing cars to access the park at certain locations but also preventing them from using the park as a cut-through. And it also keeps cars out of the narrower parts of the loop,” said Glasser.

George said she approves of opening the loop near Hogan’s Fountain, because it would alleviate parking concerns and allow easier access to the amenities there. But, she doesn’t know if it’s necessary near the rugby field, because there aren’t amenities like playgrounds and bathrooms there.

Glasser said he presented his plan to the Conservancy and to Chambers Armstrong, but it was not mentioned at the virtual meeting.

Twenty-six percent of people who took the Cherokee Park survey said they use the loop for leisure driving.

In comments on Facebook posts about the survey, several people who use the parks for leisure driving said they were older.

George said, “We have a lot of empathy and appreciation for those park users who do experience the park form their cars. I think at this point it’s a question of safety.”

THE LOOP’S HISTORY OF CHANGE

Frederick Olmsted designed Cherokee Park in 1891 to be an escape for city-dwellers, George told LEO. There were no cars at the time, so George thinks the loop’s purpose was for horse-drawn carriages.

In the 1990s, more people started using Cherokee Park. To give the new visitors more room, the city decided to take the loop from a two-way road for cars down to a one-way.

“It was a difficult decision for the administration and certainly not without controversy,” said George.

Olmsted also recognized that uses for Cherokee Park may change over time. George read a 1935 quote from the Olmsted Brothers saying that the park’s original bridle trails could be converted into walking trails should the demand arise.

Now, the park has once again seen an increase in users. Jefferson County parks have seen a 121% increase in visitors from their baseline, according to a March Google report, tracking movement trends during the pandemic.

“I know that on some of these recent weekends that have been so beautiful, I would be petrified to drive a car through the Scenic Loop,” George said.

Packer used to take her daughter and her 8-year-old son to Cherokee Park a couple times a month.

Since the loop has been closed, they’ve only been once. She parked on Willow and pushed Claire to the park in her wheelchair. They walked a portion the loop and checked out one of the trails.

“It was OK,” said Packer. “But it just stunk because we couldn’t go to the vast majority of the park.”

Instead of going to Cherokee, Packer and her family have visited Beckley Creek Park more often, which is closer to their home in Middletown and completely accessible, Packer said. But, she misses Cherokee.

Jacqueline Raque, who uses a cane because of a disability that limits her mobility, moved to Louisville in March just before the loops closed. One of the reasons she chose to move to Louisville from the Bay Area was because of the city’s parks. But, because of the Cherokee Park loop closure and medical issues that have sent her to the hospital several times, Raque, who lives in the Original Highlands, has not visited the park that she originally envisioned spending hours relaxing in.

“It broke my heart,” said Raque, 62, about the loop closure. “I was highly disappointed because that was actually one of the things that validated that this would be a reasonable risk to take, moving cross country like this.”

Those who would like to voice their opinion about the city’s loop proposal can send an email to [email protected] or call 502-574-PARK. Officials with Louisville Parks and Recreation, the Olmsted Parks Conservancy, Louisville Forward and Public Works and Metro Councilmembers will be hosting public meetings to discuss the future of park loop roads in Cherokee and Iroquois parks on Tuesday, April 6 and Thursday, April 8. Both take place from 6-7 p.m. and will be streamed live on Louisville Parks and Recreation’s Facebook page.