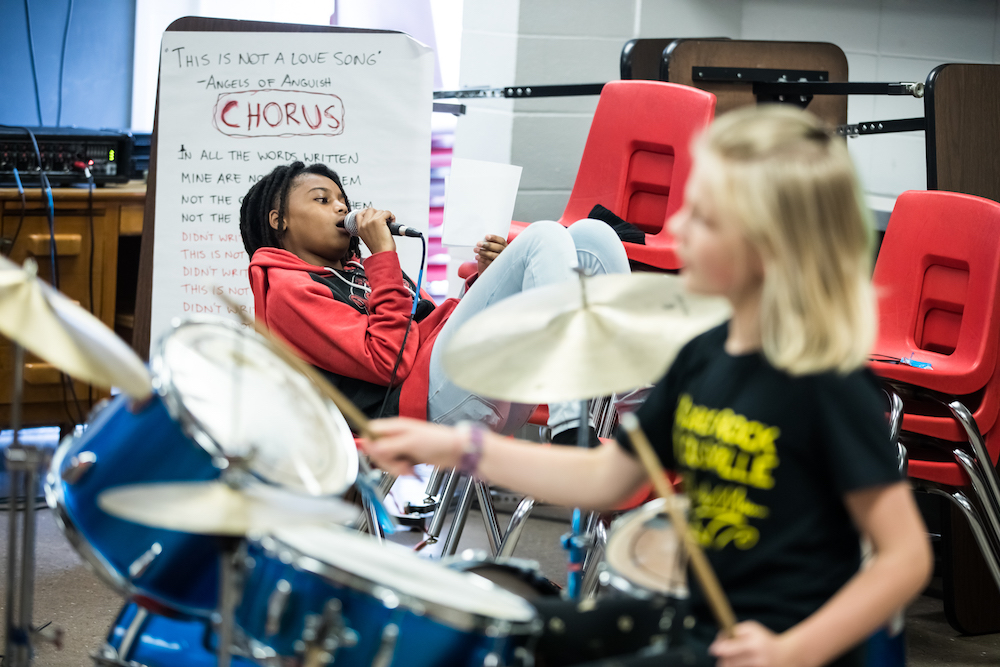 Angels of Anguish, a band that formed at the 2019 Girls Rock Louisville camp. | Photo By Kathryn Harrington.

I consider myself fortunate to have many youth teach me how to call out the truths hidden in plain sight. I am now the executive director of an organization that, for the time being, is called Girls Rock Louisville (GRL). GRL empowers girls, trans (regardless of identity) and gender non-conforming youth from all backgrounds by exploring music creation in a supportive, inclusive environment.

But, I have not always been in the ED role. I have spent most of my years with Girls Rock Louisville as a volunteer, organizer and bass teacher. One day, after a long recording session at La La Land studios for our Summer Camp 2018 Album, I was sitting in the main control room with Anne Gauthier, La La Land’s head engineer, and a few other folks like Carrie Neumayer, GRL’s former Executive Director. As we decompressed together, a very meek Black youth approached us and sat down. After a bit of nervous hand playing and mumbling, they told Carrie that they wanted to do a project to honor their favorite musician and Godmama of Rock and Roll, Sister Rosetta Tharpe. What she made clear to us is this: our youth need more BIPOC and LGBTQ+ representation in music.

Without hesitation, Carrie told them that we would work to make a program that can help young people explore the history of the women, femmes and gender expansive folks who have contributed to rock history. In the spring of 2019, GRL launched our very first representation and visual art centered project.

Girls Rock Louisville’s Rock and Roll Representation Project is an 8–12 week long program that started on Feb. 3 with Noe Middle School that provides youth the opportunity to learn feminist archiving techniques and curate visual projects. Their projects represent and celebrate the legacies of women, femmes, trans and gender non-conforming people in music history.

During the music history portion of our program, students learn about music history research methods such as basic archival research techniques and identifying significant music history artifacts. Students practice researching on a curated list of music-makers. The youth take a field trip to the Rock and Roll Hall of Fame in Cleveland, so they can see a public music archive in action. During the second half of the program, students are paired with an artist mentor. The projects serve as a tribute to the music-makers that youth choose to honor as their nominee for the Inductee Hall in the Rock and Roll Hall of Fame. We host a public viewing of their work by recreating a Hall of Fame of our own with our own inductees.

Our first round of the program was great. We had 15 youth who were selected to complete the project. They learned about music history, the foundations of the Rock and Roll Hall of Fame as an archive and more.

There was a personally significant moment that happened between a student and I, which made it even more clear that our youth deserve more public representation of BIPOC and gender expansive music makers in music.

During our day trip at the Rock and Roll Hall of Fame, I had a tagalong friend — a young Black scholar and fantastic drummer — who walked the halls with me. We wandered around the corridors of the museum, musing on whether or not Prince would consider himself queer and pointing out every wild drum kit we could find. We finally approached the small section dedicated to hip-hop which featured artifacts like Kelis’ baby blue on white Air Force 1s and assorted sport jackets of ‘80s and ‘90s emcees. After a bit of a pause, this youth turns to me and says “Ms. Jerika. Why are all the Black people in one corner?”

I smiled and shook my head. We both knew why most of the Black people were in one corner dedicated to hip-hop. As we walked away, I recalled a session when Guestroom Records General Manager and Media Director Lisa Foster, DJ and WFMU radio host Kim Sorise and I crunched the data on the demographics of Hall of Fame’s inductees and archival composition. As of 2019, of the 338 members inducted into the Hall of Fame, only approximately 15% of music-makers found in the Rock and Roll Hall of Fame were women. Of those 45 women, 12 are only featured because of their association with bands comprising of a majority male-identifying persons. Only seven of those women are recognized as musicians other than vocalists. The majority of the visual representation of BIPOC within the Rock and Roll Hall of Fame is found in the section dedicated to hip-hop artists with some sizable representation within the “Early Roots Of Rock And Roll” section of the archive itself.

These figures have slightly changed. During the current session of the Rock and Roll Representation Project — happening now with Noe Middle school students — resident music historians Stachelle Bussey and Alex Kandel found that only 7.7% of all individuals inducted into the Hall have been female. In addition, the percentage of POC in the Hall of Fame is steadily declining from 55.8% in 1989 to the current low of 32.7%. Even more strikingly, LGBTQ and gender expansive representation within the Rock and Roll Hall of Fame Museum and Inductee Hall appears nonexistent despite the inductees. There have been only about 12 openly LGBTQ+ identified musicians inducted into the Hall of Fame since 1986.

In May of 2019, the youth had their first exhibition at KMAC Museum which was met with overwhelming positive reception. After talking with the youth after their exhibition, we learned that this was the first time many had ever learned of music-makers in history that represented them. Their feedback is truly a humbling tragedy. I challenge all of us who are creatives or who are consumers of media to uplift and create real space for the legacies of BIPOC and LGBTQ+ artists. Our youth are seeking out representation in music. We, as music consumers, need to ensure that they are able to find it.