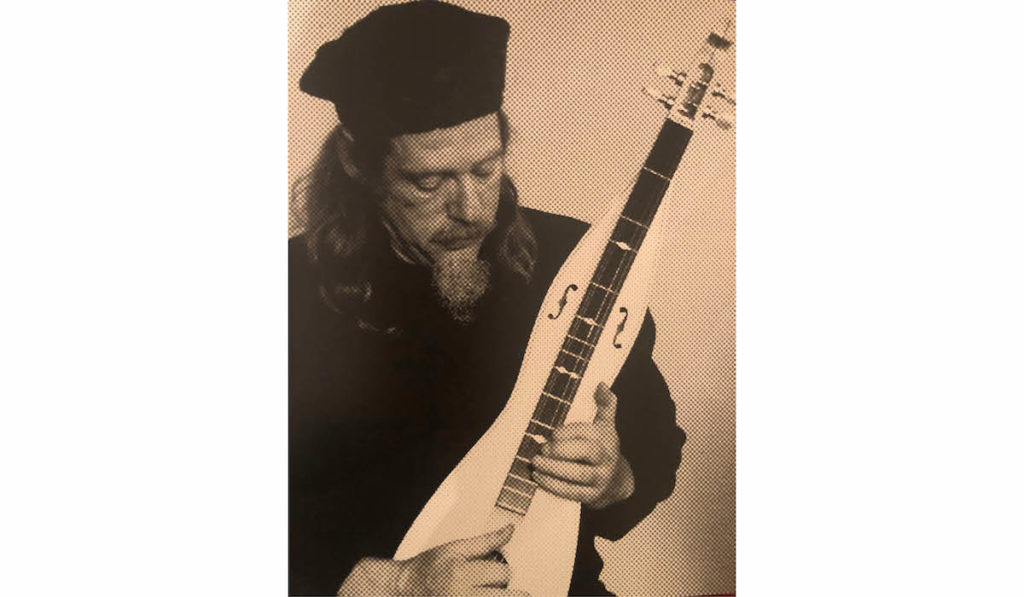 The late Steve Ferguson holding one of his dulcimers.

In some ways, Louisville is like an alleyway. It’s a smallish city, with big city dreams. We’re sort of between here or there and always on the way to somewhere else. We’re both a place to move through, and if you stop, a place that quickly becomes home. In places like these — unexpected though not unknown places — we find the blooms of somethings wonderful popping up in the cracks of the sidewalk, in the alley. Singer-songwriter and guitarist Steve Ferguson, known to many as “Fergie,” was one of these blooms.

Ferguson was born in 1948 and lived in several parts of the city of Louisville, including Clarksdale Housing Project, Hazelwood, The South End, in Portland and around 34th Street in The West End. He was one of the city’s most popular guitar players, mixing blues, creole music and other sounds into his performances including spending a lot of time playing with other local musicians in his five to six nights a week at Air Devil’s Inn.

Now, new recordings have been released and his voice and playing can be heard again. This final collection, a recording of dulcimer songs called “Blue Ice of Winsted”  has just been released, 11 years after his passing from small cell lung cancer in 2009.

“He was just so unique an artist,” said wife Sheri Ferguson, as she recalled his legacy. “He purchased his first dulcimer a number of ago. He never played it out for performances. He really liked it and was really good at it.”

In the 1960s, when Terry Adams formed the first incarnation of NRBQ with his brother Donn, the local surf-rock band battle scene was raging. NRBQ was something different. They introduced themselves to the world as the New Rhythm and Blues Quartet. Steve Ferguson joined shortly after this early incarnation — first as a fill-in for someone else but quickly becoming a full member of the band. When the band moved to Florida, Ferguson followed but soon came back home to Louisville.

The band recorded songs by Eddie Cochran (“Summertime Blues”), Sun Ra (known for experimental jazz and afro-futurism) and collaborated with legendary players like rockabilly legend, Carl Perkins. Ferguson left the band for good in 1974 but played with the band for fun throughout the years.

He continued to build his legacy throughout Louisville and beyond, experimenting with sounds from several genres including blues, bluegrass, and creole music, forming The Midwest Creole Ensemble and his Operation Blues Assault. He recognized the connections in sounds and wanted to explore the cultural intersections further.  And, despite his passing, his legacy and name still bring fond memories to mind for fans of local music. This new collection of music should come as no surprise. It was just another facet of an artist who had many.

“As time went on, he acquired several dulcimers. In the end, when he got really sick with cancer, he couldn’t hold the guitar up as well so he just decided to stick with the dulcimer and a friend said, ‘Hey let’s make a recording,’” said Sheri Ferguson.

“It was wonderful that Steve came full circle in his final years of life with the dulcimer, back to his actual roots,” Sheri Ferguson said.  “Confirmation of  being a fourth cousin to Bill Monroe was great, and I’m sure inspired him in this final work he did.”

Creating the final product was somewhat of a challenge due to effects of Steve Ferguson’s illness showing up in the recordings, but Adams manages to remove those.

“He really put his heart and soul into it,” said Sheri Ferguson.  “It was really special. The way it stood — and Steve knew you could hear him breathing— he wanted to leave that on there instead of dubbing it out. Terry took that out in the end.”

The resulting record is an intimate look into the final days of Ferguson’s work and life. Much of it is instrumental though he can be heard singing in parts, and the audience will recognize that he was going through a lot, but the sound is still magical with the structure of traditional bluegrass with the hint of blues still peeking through.

Though Ferguson left NRBQ in the 1970s, he was often still seen on their stages as the years went on. Until his final days, he remained a part of the fabric of the NRBQ legacy while also creating his own work locally.

“I heard him play the intro to ‘Flat Foot Flewzy,’ which was life-changing for me because all the other guitar players at the time were trying to distort and be like Hendrix,” former NRBQ Guitarist Big Al Anderson told MassLive.com in June of 2009 as they prepared a tribute to the then ailing Ferguson. “But Steve was the real deal, the only guy playing like that — real.”

The final recordings, “Blue Ice of Winsted” can be found and purchased on the NRBQ website.