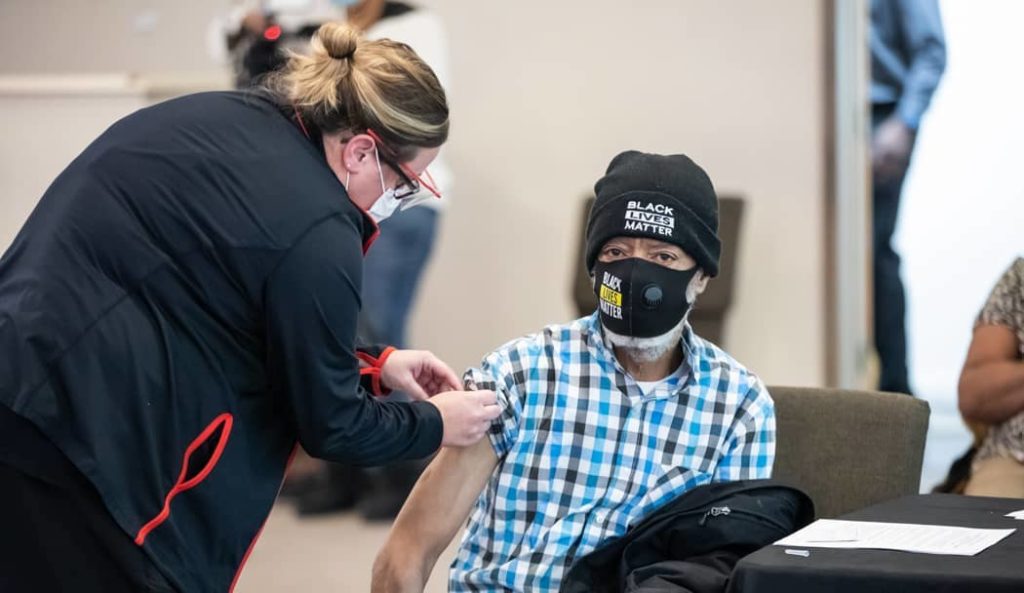 Much has been said about how vaccination rates are lower amongst Black Americans, because they’re rightfully distrustful of a medical system that has experimented on them and brushed off their legitimate medical complaints for generations.

But the Rev. F. Bruce Williams of Bates Memorial Baptist Church in the Smoketown neighborhood thinks more needs to be discussed about how to make sure the vaccine is actually accessible for Black people in Louisville.

In Louisville, only 11% of vaccines that have been distributed have been injected into the arms of Black residents, even though Black Louisvillians make up around 22% of the city’s population. Some of this might be attributed to the racial makeup of eligible professions — teachers and health care workers — but transportation and internet access is also holding back Black Louisvillians from being vaccinated, according to T Gonzales, the city’s chief of health equity.

Gov. Andy Beshear and Mayor Greg Fischer have preached and encouraged an equitable distribution of the vaccine. But, the state and local governments are ultimately leaving the logistics up to vaccine distributors. In Louisville, these distributors are tackling the issue with a series of pop-up vaccination sites at predominantly-Black churches like Bates Memorial in parts of the city hardest hit by COVID, which help residents who have transportation and internet access issues.

Norton Healthcare and UofL Health are sending sign-up information for those sites to the churches first for them to distribute within their congregations and neighborhoods to ensure the sites are serving the communities in which they’re located. Those without internet access are not being left out, because sign-ups can often be done in person or over the phone.

The vaccine distributors are not providing transportation to appointments, but churches and organizations including the Louisville Urban League and Black Lives Matter Louisville are arranging socially-distanced buses and rides for those who have asked for it.

Norton has also opened a permanent vaccine distribution center at the YMCA at 18th Street and Broadway.

Baptist Health Louisville plans to start its own vaccine pop-up sites in underserved communities when its supply increases.

On Monday, Feb. 15, Beshear announced that the state would be working with nine community health centers around the state to disseminate the vaccine to “hard to reach” populations as part of a federal program. But, no details have been provided about where these health centers are located.

At Bates Memorial on Friday, Feb. 12, Williams stopped in and watched as some of the 200 people who were vaccinated that day received their doses, provided by Norton Healthcare.

“Everything was running smoothly,” said Williams, “and people were glad to be able to have the opportunity to come in — and that we were offering it.”

Williams said he appreciates that Black ministers have been folded into the vaccine distribution plan, but he wishes they would have been involved earlier.

In June in the midst of Louisville’s racial justice protests, Norton Healthcare said it would start to take action on closing health equity gaps in Louisville. The hospital system created an Institute for Health Equity to come up with solutions, committed $20 million over five years to open facilities in underserved areas, and promised to hire an executive director.

Dr. Kelly McCants became that executive director. He told LEO last week that Norton had already started to address how to distribute the vaccine equitably by opening its YMCA vaccination site when the state and local governments began calling for equitable injections across the state.

“It’s not that we were reactive to the call to the action. We were really leading the charge, and the call to action aligned very nicely with what we were already doing,” McCants said.

After the push from the government, though, Norton contacted the Rev. Kevin Cosby with St. Stephen Church to involve Louisville’s Black churches in the vaccine distribution process.

UofL Health adopted a similar strategy. Dr. Edward Miller, the hospital system’s chief diversity officer, said that “diversity leaders” in Louisville are “always” having conversations about what they can do better to serve the community.

Leaders at both hospitals and Baptist Health are all also on Metro government’s COVID-19 Vaccine Distribution Task Force.

Sadiqa Reynolds, the president and CEO of the Louisville Urban League, said that an intentional effort is necessary to target the Black community for vaccines, because it’s the most impacted.

“I’m not saying that others aren’t being impacted. I know people are getting sick and dealing with long-haul effects and dying across our country and across our community,” said Reynolds. “But, the rates of death in the Black community — and I mean we’ve just got to be really intentional about talking about it.”

Nationally, Black Americans are dying at a rate that is almost two times higher than the rate at which white Americans are, according to the U.S. Centers for Disease Control and Prevention. In Louisville, there are majority white and Black zip codes with high rates of COVID deaths, but many of the hard-hit zip codes with higher Black populations than the county as a whole have lower vaccination rates compared to the whiter, hard-hit areas, according to Louisville Metro Department of Public Health and Wellness data. So far, the health department reports that 20% of all COVID deaths across the city have been Black residents, which is slightly lower than the percentage of Black people in Louisville’s population (21.7%).

Churches were chosen as the entry into underserved communities, said McCants, because they’re well-respected  and “have always” made sure their communities are aware and engaged with social issues.

“So, as a medical provider, understanding that culture and the trust that faith and health ministries has already built in these communities, we just leveraged that,” he said.

On Feb. 11, Norton held its first vaccine pop-up event at St. Stephen in the California neighborhood. The one at Bates occurred the next day. Around 200 people were vaccinated at both. There have also been two vaccine events since: one at Quinn Chapel AME and another at Burnett Avenue Baptist Church. Norton hopes to hold one to two a week going forward.

Last Friday, UofL planned to distribute 400 doses at Kingdom Fellowship Christian Life Center in Smoketown. Dr. Edward Miller, UofL Health’s chief diversity officer, said that the frequency of these vaccination events will depend on how many doses the hospital system is allocated. But, UofL Health intends to continue setting aside a fluctuating number of doses for the pop-up sites.

Nationally, sites meant for underserved communities have had issues with attracting people from wealthier neighborhoods, often white, who fill up appointments before low-income residents are able to sign up. Louisville’s vaccine distributors are trying to target that with the way it distributes sign-up information within underserved neighborhoods first.

When Norton opened up its YMCA vaccination site, the hospital started by circulating sign-up information through the networks of the Louisville Urban League and area churches.

But, the minute that information emerges on social media, everyone across the city wants to book an appointment, said Reynolds.

“We have all heard, you know, oh, people are scared to come to The West End. They don’t cross Ninth Street. Until there’s something they want. Then it doesn’t matter what they look like, how much money they make, they’ll come over,” she said.

After “a few” weeks of holding slots, Norton started listing appointments on nortonhealthcare.com, said hospital spokesperson Kate Eller. Now, the health care system checks for unfilled appointments and calls patients without internet access who have called Norton’s phone line to get them scheduled.

The hospital is now using its community-based vaccine sign-up strategy for its pop-up locations, as is UofL Health. Both hospitals have handed over responsibility of registering community members to the area churches. With UofL for example, the churches are calling people to sign them up, then the hospital is calling the churches to collect the information. For Norton sites, community members can also sign up for slots in-person at participating churches.

At Norton’s St. Stephen and Bates vaccine pop-ups, 86% of those vaccinated were African American, which was a success based on the demographics of the surrounding neighborhoods, said Dr. McCants. Norton could not provide demographics for those who received vaccinations at its YMCA site, and UofL Health did not have data for its pop-up vaccination sites.

People who receive vaccinations at Norton’s community sites are meant to get their second dose at the YMCA location. The hospital does not have its own system for transporting patients to The West End site, but residents can contact community organizations offering free rides.

As vaccines become available to more people, specifically in the 1C group, which includes essential workers and 75% of Jefferson County’s population, Dr. Miller said that UofL Health is planning to involve even more Louisville areas that are hard hit by COVID and partner with different types of community hubs like barber shops. Dr. McCants said that Norton will be “even more aggressive” with its equity efforts and will start expanding its pop-up sites to other areas of the city, including southwest and southeast Louisville and into Latinx communities.

“But, from a disparity standout we wanted to make sure that we went to the most vulnerable communities first,” he said.

With ensuring equitable access to the vaccine and other public health issues, the Louisville Metro health department is more of a coordinating force, according to Gonzales — trying to get all of the different public health networks in the area on a similar page. Metro government is also running the LouVax site at the Kentucky Exposition Center, the largest vaccination site in Louisville at which over 1,000 people can be vaccinated at each day.

“But we know that we need these other components, and that’s why we’re relying on our partners to be able to help us reach that,” said Gonzales.

In recent decades, not much money has been invested in public health infrastructure, said Connie Mendel, the health department’s incident commander for the city’s COVID-19 response.

“It’s almost embarrassing for us to say that we don’t have an electronic health record system as a public health department,” she said. “Those systems that people have with Baptist or UofL or Norton or others where you have MyChart or portals? We’re not there.”

But, the government’s coordination efforts have felt lacking to Reynolds. She said she didn’t feel as if Black community leaders were involved enough in the planning process for distributing vaccines equitably, although, she did say that she was part of a focus group held by the state government.

“Norton did a good job of getting us involved on the front-end originally. But, sometimes, I think with government, they will wait and try to roll it out and come back and go, ‘OK, now we need to get the Black churches involved, now we need Black leadership involved,’” said Reynolds.

This will become even more important as vaccines open up to individuals in the 1C vaccination category.