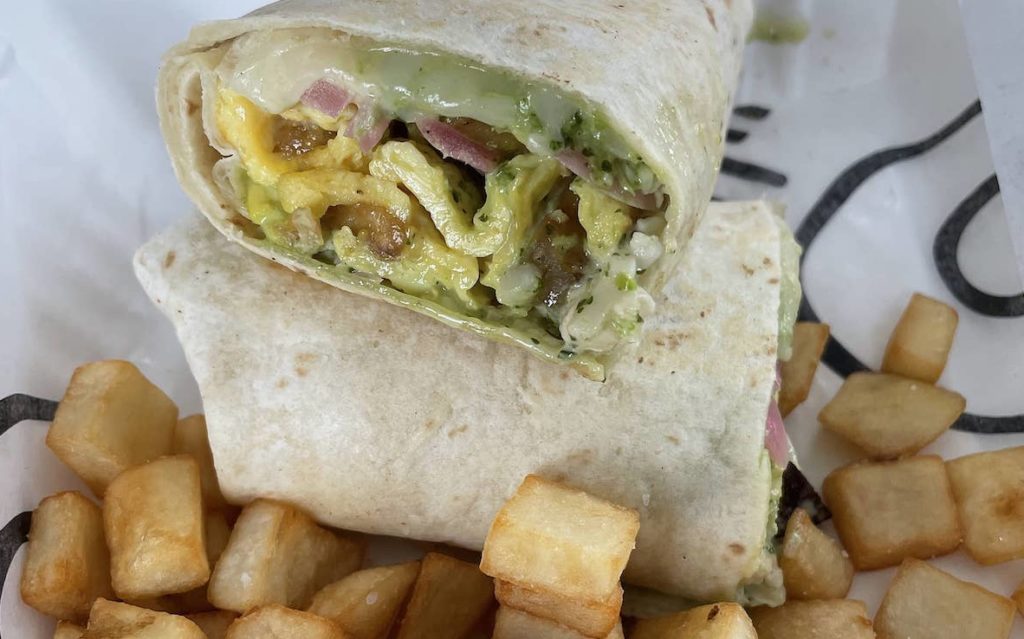 Here's a look inside the burrito gordo at Con Huevos. There's plenty of egg, potato, tasty veggies and Mexican spice in there.

Brunch is one of my favorite meals. It’s right up there with breakfast, lunch, dinner, and, of course, breakfast for dinner. Notice how breakfast keeps coming up?

But I’ve had a problem with brunch since the pandemic has wiped out my enthusiasm for dining inside a local eatery, no matter how carefully socially distanced: I love brunch dishes that feature soft fried eggs or poached eggs, ready to deliver their custardy yolk as a flavor booster to whatever they’re served on. Like the huevos rancheros at Con Huevos, for example.

But doggone it, soft eggs just don’t work in a takeout box. Just like those not-so-rare meatballs that I complained about the other day, your luscious soft egg is going to keep on cooking in the well insulated environment of a plastic-foam container. By the time you get them home, they’ll be hard-cooked, and that just doesn’t do it.

Does this rule out takeout brunch entirely? No, but you need to bring a different strategy to the menu, and that may involve dropping your old favorites, while opening your mind to new and different brunchy treats.

I woke up Sunday morning and realized that Con Huevos brunch would be just the thing for a chilly day with snow in the forecast. No, it wouldn’t be wise to try to get anything involving soft eggs home, but that left plenty of options and opened the possibility of discovering new favorites that I hadn’t tried before.

Con Huevos’ menu is an excellent brunch option because it offers a good selection of Mexican dishes that work as breakfast, lunch or a little of both. All the dishes are made from scratch, and you can taste the quality. I’ve been a fan since the first Con Huevos opened in Clifton in the spring of 2015.

You’ll find about 30 tempting dishes to choose from, including breakfast and lunch dishes, egg sandwiches, tacos, even avocado toast. No matter what you choose, it’s probably going to cost between $8 (for a four-pancake stack or a quesadilla) and $13 (for a trifecta platter that would be equally at home in Mexico City or Minneapolis with its hearty load of three pancakes, three strips of bacon and three eggs as you like them).

Some of the many favorites that appear to be good choices for holding up under takeout conditions include classic French toast ($9, or $10 with dulce de leche), tres leches pancakes ($10), plus lunch options Mexican sopes ($10.50 for three) or a drunk burrito ($12).

There’s a short childrens’ menu and a fascinating collection of beverages including Mexican coffees, mimosas and margaritas.

We eliminated all the fried and poached egg options, but that left plenty of good choices.

The burrito gordo ($11) was a filling take on a breakfast burrito, and it held up just fine on the trip home. A large, tender, house-made wheat tortilla was neatly rolled around a portion of eggs that had been scrambled in a thin layer, then squeezed into its wrapper with small potato chunks and crisp, pink pickled onions. It was flavored with gently-spicy chipotle cream and jalapeño aioli, finished with a molten lid of lightly-earthy Oaxaca cheese. The intriguing combination of textures and flavors played well together on my plate, alongside crisp-tender home fries cut in perfect squares.

Street tacos are served on open-face, fresh-made corn tacos sturdy and thick enough that they don’t need to be doubled, and they’re filled with generous portions. They seemed as if they’d travel well, and the $12 toll for your choice of three from five options is fair.

We chose pork carnitas, beef sirloin carne asada and a roasted cauliflower taco — one of a handful of vegetarian options on the menu.

The carnitas consisted of slow-cooked pork, pulled into shreds, and there was a lot of it. The carne asada had cubes of grilled beef in varying sizes, with a little tasty charring on the outside but still juicy within after a fairly quick trip home.

Both meat tacos were topped with diced pickled onions and a little chopped cilantro, with lime wedges to squeeze on as well as hot green jalapeño salsa and hotter habanero salsa.

The cauliflower taco was packaged in a separate container to protect it from random meat juices. Four or five good-size florets were beautifully roasted, showing golden-brown edges. They were cooked but not overdone, just crisp-tender. It was topped with a dab of rich refried black beans, fresh diced tomato-and-onion pico de gallo and a few chopped cilantro leaves. A tub of fiery habanero salsa was packaged alongside.

A churro waffle ($9), which was four waffle quarters topped with cinnamon sugar and butter, strawberry and banana slices, and tubs of sweet dulce de leche and condensed milk, rounded out a delicious takeout brunch for two.