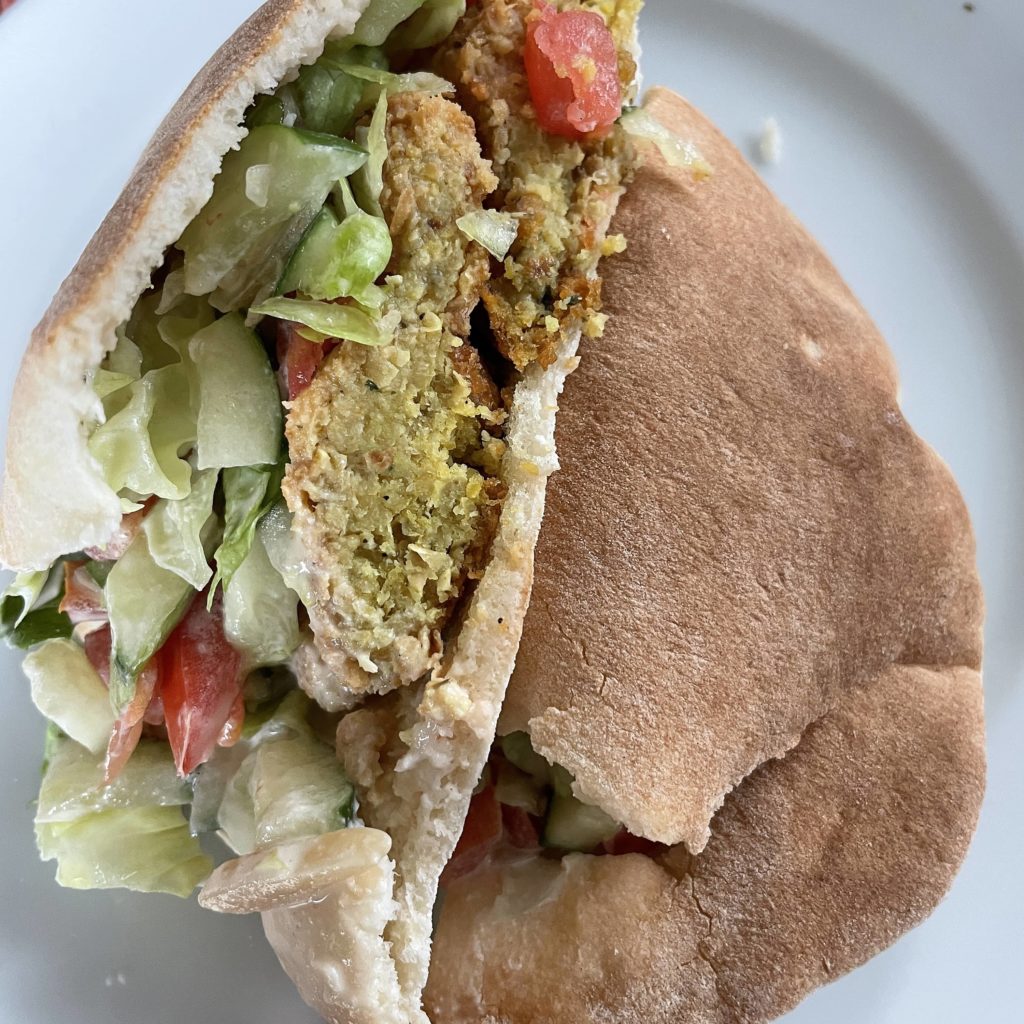 We've carved an Alwatan falafel in half to display its generous filling of tender falafel balls, lettuce, tomato, and creamy tzatziki sauce in a fresh, tender pita.

Within hours after taking office on Jan. 20, President Joe Biden moved quickly to sign executive orders to make life better for immigrants and refugees. He halted construction on the border wall, stopped family separation at the border and pushed for an end to mass deportations.

These good things merit celebration with a meal at an immigrant-owned eatery, so I headed for Alwatan. This little spot, which is operating for takeout-only during the pandemic, is owned by Palestinian immigrants. It offers a good variety of Palestinian, pan-Arabic and Mediterranean food, taking full advantage of fine Mediterranean breads from its sibling bakery, which is located next door.

Alwatan’s menu is extensive and affordable, with most dishes under $10 and only a handful of beef or lamb entrees rising to $13.99. It includes a few Palestinian specialties along with a broad range of the pan-Mediterranean cuisine.

Fifteen appetizers and eight salads range in price from $3.99 (for falafels, stuffed grape leaves and some salads) to $10.99 (for a dinner salad, topped with lamb gyros meat or a salad combo). Don’t be put off by an appetizer called “foul” — it’s actually a tasty fava bean spread ($5.49) named “fūl” in Arabic.

Other Palestinian appetizer favorites include shakshoka ($8.99, eggs baked in spicy tomato sauce); mutabil ($7.99, smoked eggplant with garlic and tahini) and mujadara ($7.99, a delicious mix of rice, lentils and onions that I’ll tell you more about shortly).

Each of the nine sandwiches may be served alone — with choice of pita or white bread — or as a combo, adding fries or salad and a canned soft drink for $2 more. The sandwich list includes three kabobs, two gyros, two shawarmas, a falafel and a standard hamburger. Prices range from $4.99 (for the burger, non-combo) to $8.49 (for several of the sandwich combos).

Eight entrees are clustered in price from $12.99 (for a chicken kabob) to $16.99 (for a three-kabob mixed grill featuring chicken, beef and ground-beef kofta kabobs). The entrees are larger, plated portions of the shawarma, gyros and kabob meat used in the sandwiches, served with rice, salad, and tzatziki sauce.

If you’re feeding a crowd, you can pretty much take home the entire menu with the $69.99 Alwatana Special, a feast of three chicken kabobs, three kofta kabobs, lamb and beef gyros, three beef kabobs, a hummus plate, salad and rice, enough to serve eight hungry grown-ups.

In accord with Muslim tradition, no alcohol is served. Drink options include tea, bottled and canned soft drinks and Arabic coffee or ayran yogurt drink. There’s no dessert on the menu, but step next door to Alwatan’s sibling bakery and you can choose among a broad selection of Arabian pastries and sweets, as well as fresh pitas, quality olive oils and a small grocery selection.

The aforementioned mujadara (“mu-jah-da-rah”) might not look impressive in a quick glance at the menu. A simple, meatless appetizer, described as “rice and lentils with onions on top?” Yawn. We tried it on good advice, though, and believe me, it was $7.99 well spent. It looked more like a vegetarian main dish than an app — two pounds of deliciousness packed into a round foil takeout dish with a clear plastic top. Extra-long-grain basmati rice was perfectly prepared and tiny brown lentils were mixed throughout, imparting an earthy pop. Succulent onions, grilled brown in fruity olive oil, was spread on top, adding a rich unctuousness. We noshed on it for three days, and I wish we had more.

Tabouli ($4.99) was wonderful, too. I’m not a big fan of parsley, an herb that I consider more a decoration than an edible, but I’ll make an exception for Alwatan’s version. Fresh, bright-green parsley dominated, chopped fine including the stems, with cracked bulgur wheat scattered throughout as a backup player in just the right amount. Generous portions of fruity olive oil and palate-wakening lemon, plus a few bits of tomato, brought it all together in a juicy, refreshing salad.

I’m always ready for a falafel sandwich, and Alwatan’s version ($4.99 for the sandwich only, $6.49 for the combo) is a good one. A house-made pita, soft and pillowy, was split open near one end and packed chock full of the traditional deep-fried, flattened balls of ground chickpeas, with a little parsley and subtle spice. It was loaded with crisp iceberg lettuce and juicy tomato bits, and slathered with creamy, sesame-scented tahini. I wanted to save half but couldn’t stop eating until it was gone.

A beef-and-lamb gyro ($6.50 sandwich only, $8.49 combo) was good but didn’t come up to the extraordinary level of the other dishes. The house-made pita was excellent, of course, but the smooth, ground gyro meat, cut in irregular slices, was passable but its flavor didn’t sing. It was served in traditional fashion with lettuce, tomato and tzatziki sauce on the side of the grilled pita.

An abundant meal for two, with tax and a 99-cent service fee from the online ordering service, came to $26.93, plus a 20 percent tip.