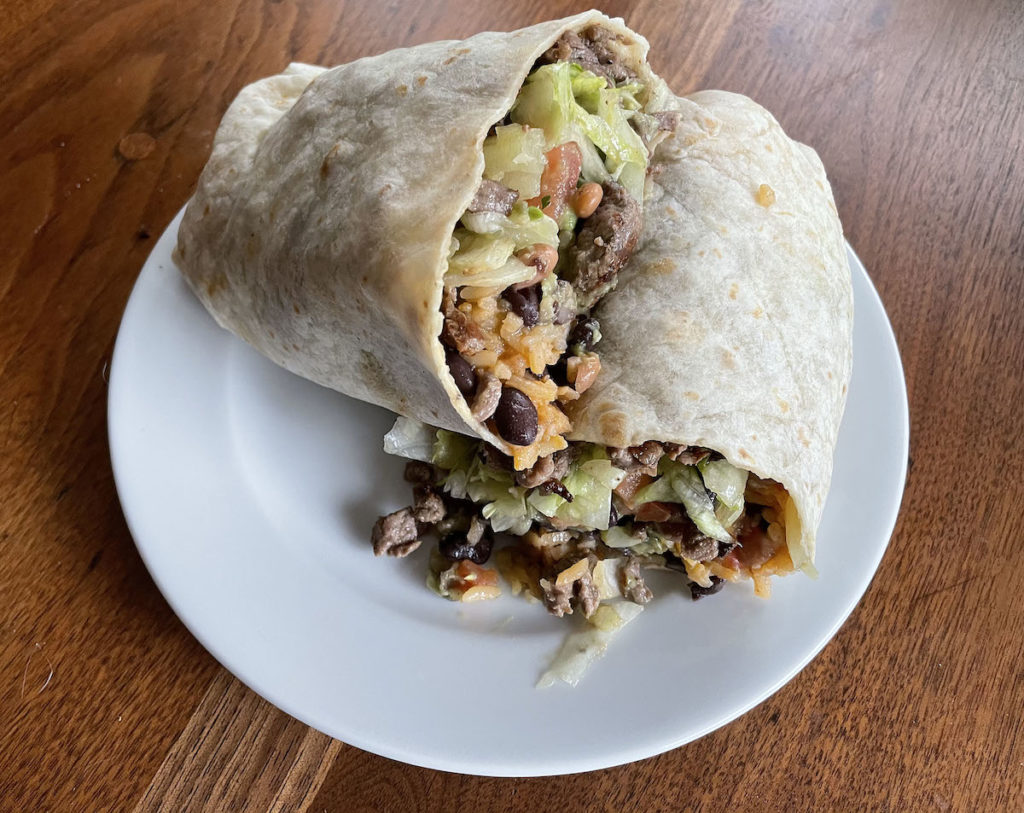 The spicy El Compadre Burrito at Taco Choza offers your choice of beef, chicken, or shrimp in an oversize, fully packed burrito.

Imagine yourself with a burrito on your plate. A hefty El Compadre burrito from Taco Choza — that’s a good one. Are you getting hungry? I sure am! Lift it, feel its weight, admire the tasty char marks on its textured wheaten surface. Mmm, mmm, good.

This is what I love about a burrito: When you bite through that tasty, flour tortilla wrapper, your first mouthful incorporates a collection of goodies. With Taco Choza’s signature El Compadre, that’s going to be meat, reddish-tinted Mexican rice, two kinds of beans, salad greens, a dash of pico de gallo, a taste of guacamole, a bit of sour cream and a drizzle of queso, all coming together in one symphonic gulp.

That’s a lot to like, and I think it helps explain the burrito’s enduring popularity. It’s no coincidence that this portable lunch in a wrapper became a favorite that you can find everywhere from your local taqueria to such fast food big names as Chipotle, Qdoba and Moe’s. I’ll pass on the giant chains, with the possible rare exception of Chipotle, but I’m happy to pick up one or two burritos at a local Mexican spot, particularly if I’m in a mood for one big burrito in favor of, say, four or five tacos. I like Taco Choza, which has been around for just over two years and whose name translates as “Taco Hut.” I like that.

Before we talk about the food, by the way, let me tell you another reason I admire this place: its way of doing things. Consider this Facebook post from the owner on Nov. 21, the day after Gov. Andy Beshear’s most recent dining-in shutdown order:

“If you are not working/not getting a paycheck/struggling to make ends meet and run out of food or necessities … please don’t let yourself or your kids go to sleep with an empty stomach. Don’t be afraid or embarrassed to send me a private message. I am more than happy to help. I will drop and go or order for delivery. No one has to know and I will pretend it never happened. What’s understood never has to be explained.”

I admire a restaurateur who acts like that, and the least I could do was head to Taco Choza for lunch. We brought home a couple and sides — it made more than enough to nosh on for about three days.

The menu leans heavily toward tacos, offering an assortment of 20. Almost all are $3.99, with a couple of fancier models — beef barbacoa and a salmon taco — for $4.50. Salads are $5.99 and $9.99; quesadillas are $4 (for plain cheese) or $9.99. Sides and specials are $2.50 to $9.99 (for the menu-topping special, a torta de Cordoba, a traditional Mexican sandwich with your choice of grilled steak, chicken or pork carnitas). Beer, sangria and margaritas are available, along with horchata and Mexican and domestic soft drinks.

The burrito department offers a choice of the signature El Compadre; a fajita-stuffed burrito and a meat-free burrito vegetariano. You can also order a burrito bowl with all of the filling and none of the tortilla, but why would you want to do that? They’re all $9.99.

Burritos come tightly wrapped in red-and-white checkered paper. They are huge, rolled in sturdy flour tortillas a bit more than 14 inches in diameter.

We tried an El Compadre burrito and a meatless Vegetariano (both $9.99). They both start with a base of similar filling ingredients rolled into a big, grill-warmed tortilla: red-tinted Mexican rice, pinto beans and black beans, diced raw green pepper, onion and tomato. They’re also boxed with a tub of thick, mild but faintly earthy queso and your choice of hot pale-green jalapeño salsa or hotter reddish habanero salsa.

El Compadre adds your choice of grilled steak, chicken or shrimp. We chose the steak option and got a good half-cup of cubed grilled skirt steak that had been seared on one side. The ingredients were drizzled with pale-green jalapeño salsa and finished with torn pieces of iceberg lettuce, then rolled — not too tightly — into a loose cylinder with the ends folded in.

In lieu of meat, the veggie burrito added tasty, fresh veggies to the rice-and-bean base. In addition to larger portions of good quality, tender but not mushy black and tan beans were fresh spinach leaves, strips of grilled red and green pepper, sautéed onions and queso.

Chips and salsa ($2.50) came in a brown paper bag that got home covered with stains from the abundant oil in which they were fried. So yes, they were deliciously greasy but crisp and fresh. The salsa was mild but well flavored, a thick tomato puree without adornment.

Two cobs of Mexican street corn on wooden skewers ($3.50) were a good representation of traditional Mexican elotes. Still warm after their trip home, the yellow corn had been coated with a mix of queso and mayonnaise and heavily sprinkled with mild red-chile powder, with a fat wedge of lime alongside for garnish.