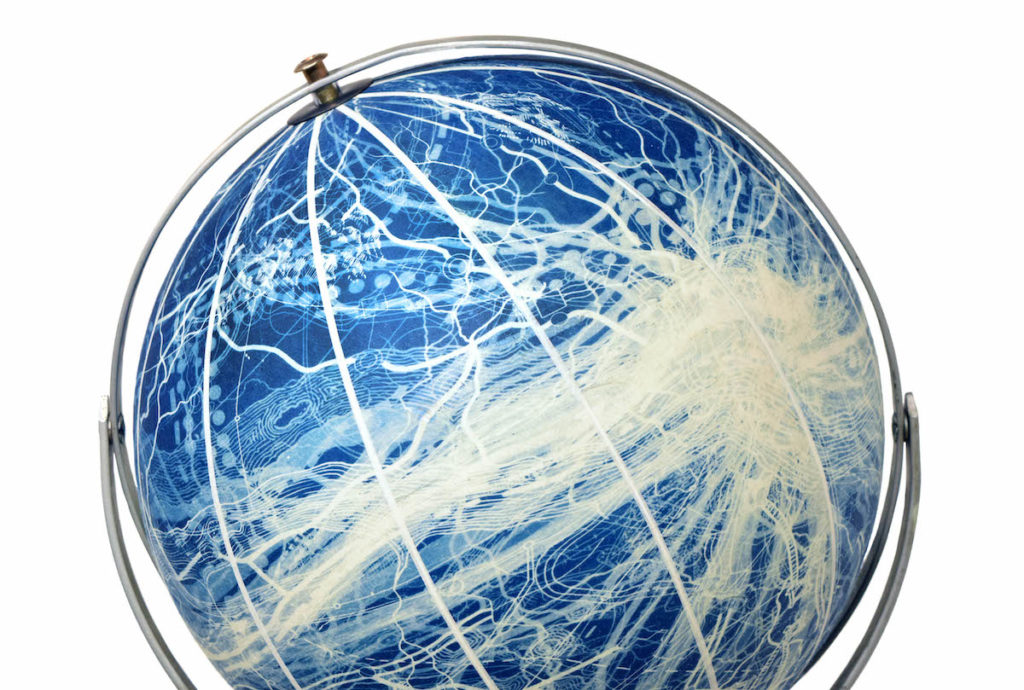 I have long been fascinated by maps. As a child, when my father would take me on long car trips, he always made a point of stopping at a service station whenever we crossed a state line to pick up a map for me which, back then, were free to travelers. As we passed through the country, I would follow our progress on the roadmap; Rand McNally was a style I came to recognize. A roadmap is only one facet of describing a country. A roadmap has no relief, only paths of travel, names of towns and locations of rest stops. One of the few aspects of nature that the roadmap acknowledges is, of course, rivers. And rivers, from the beginning of cartography, remain one of the primary routes of travel to be detailed in maps of any century, and it is one river in particular that is described by printmaker Susanna Crum.

In “Watershed Globe Project,” open now at the Carnegie Center for Art and History, the Ohio River serves as the focus of cartographical investigation, whether it be via two-dimensional map, a video installation or a physical globe. The project asks us how we have understood the world — specifically, the Ohio River through its representation as a map symbol — and, in turn, how a map can maintain our relationship with our sense of place.

As part of the show, it is valuable to look at the series of old maps included in the exhibit. The oldest, John Filson’s 1783 map of “Kentucke,” is clearly if whimsically inaccurate, more artful and fanciful than what we might find in a modern topographical map — even on Google’s satellite maps — though, as Filson insists in the text itself, it is “drawn from actual observation.” One marvels at what is detailed on the map, nearly 250 years old: “fine cane” lands, “natural meadows,” and a region with an “abundance of iron ore,” the last of which details how the land might be put to use by the people of the time. The map also details the towns belonging to the Shawnee and Mingo, landmarks long vanished, if not outright destroyed — along with, tragically, those meadows and canebrakes.

Two maps of Floyd County are also on display. One from 1859 shows, in sidebar images, the notable houses of the county, along with several insurance offices and a jewelry store, a none-too-subtle suggestion of what was most important in the nineteenth century and therefore what was worth mapping, just as the Culbertson Mansion is prominent on Google maps today. A later map details the Floyd County comprehensive plan from 1992; “The purpose of planning in Floyd County,” the text intones, “is to assure that desired growth occurs in an orderly and efficient manner.” To this end, the terrain, much like Filson’s rendition, carries a legend populated by interpretations of the landscape — residential areas, environmentally-sensitive areas, industrial zones, flood plains and parklands. The map is a map not of the literal terrain but of usage, intended or actual.

Crum’s video installation demonstrates this evolution of maps by drawing, in the course of less than three minutes, the development of how the Ohio River Valley, specifically Jefferson County, has been depicted as a map over time. As you can imagine, the very shape of the river has changed, as our precision of “actual observation” increased, along with the attendant tools like aerial photographs and GPS. It is fascinating to watch the changes and haunting, at the same time, when one sees the disappearance of what were once large ponds and creeks, until the landscape becomes more urbanized, more utilitarian.

Central to the show (and literally in that it stands in the center of the gallery) is the “Watershed Globe,” mounted on an antique stand. On its surface, the Ohio River is figured as the equator, indicating its centrality to our lives. In addition to the globe is “Gores I,” which features these same areas of the map contained between the latitudes of the globe but flattened, a facsimile drawn so as not to distort the territory. The gores are at once familiar to anyone who has seen a map in school or in an encyclopedia, and here they are used to simultaneously limit geographical distortion as well as present a different kind of distortion; after all, a map is a distortion of the actual landscape, regardless.

The creation of a “three-dimensional space” that the gores attempt to embody on a globe can never, in fact, be anything more than two-dimensional. As such, the two-dimensional image of the gores themselves — printed as a large-scale cyanotype — becomes its own landscape, an imaginative field that enacts an imaginative river. Such art, all things considered, may be all we are capable of understanding: A map is often our own subjective representation of the world.

The show begs the question, what would a map of the Ohio River actually look like? Or our growing city, for that matter? The river, clearly, is more than a blue wriggle on a road atlas and the road more than a line, however twisting, between two points. The river, for its part, is an entity beyond representation, but then the penciled road, too, is not easily demonstrative of the road that is actually there, channeling its own streams along its curbs, for example, with its accretions of asphalt, concrete and brick. Roads, too, like our understanding, change over time.

Perhaps the most stunning image is “Map I,” a large-scale cyanotype (a traditional medium for mapmakers) that shows, in layers, the many representations of the Ohio River through the valley we call home. Extinct ponds and creeks are overlaid with roadbeds in a chaotic overture to the sweep of time as much as the sweep of the river that bisects the image. We see in the cyanotype, with its blue tint, the “blueprint” that both cartographers and architects have used, which indicates by association the professional aspect of mapmaking. At the same time, the cyanotype is a tool of artists and we are reminded that, in the final analysis, the mapmakers themselves were artists.

The nine small framed prints known as “Artifacts,” drawn in ink, graphite and colored pencils, suggest the direct approach of the artist. They waver between a childlike representation and, in the same fashion, a primitive approach to describing the territory that suggests petroglyphs. Each map focuses, as the artist states, on one particular bend in the river, how it is refined over time through our evolving vision. In one, we see fanciful mountains, like something from the maps drawn for The Lord of the Rings. In another, the playful quality disintegrates into black and red travel routes, emblematic of railroads and pikes and shades contained by the political and municipal boundaries that are both real and imagined so that, by the end, the initial elements of a map — ponds emptying into streams, a river weaving southward — shift to its utility to humans, to commuters, even to shoppers. 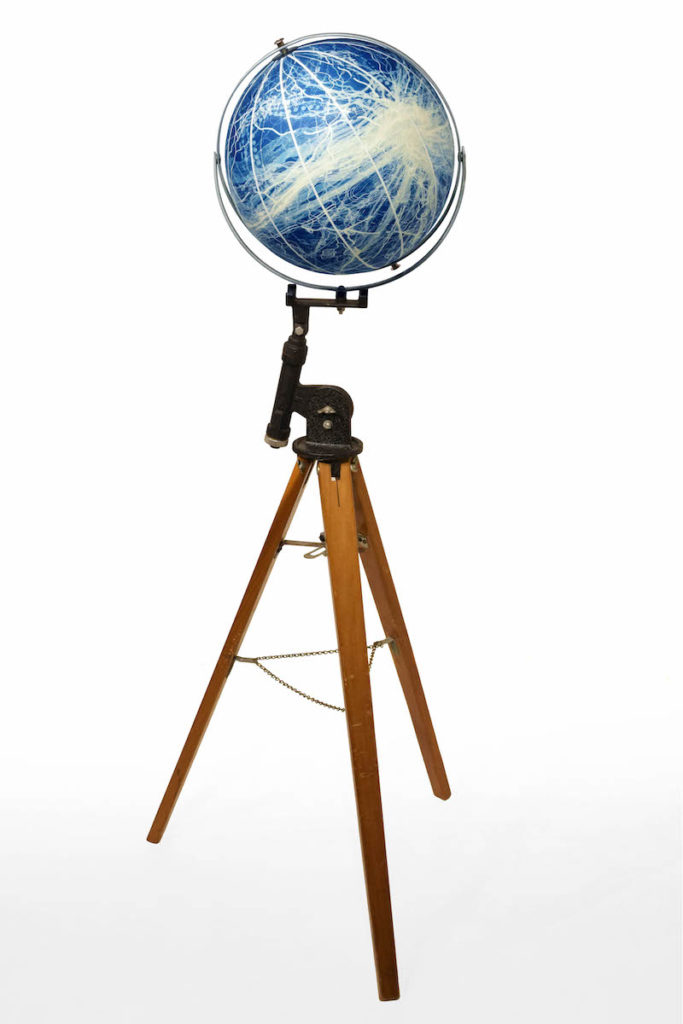 “The process of drawing,” says Crum, “allows for detailed study of maps over time.” The landscape we know, or think we know, has been drawn and redrawn over time, not least of all by us, the viewer. Each of us carries in our minds a series of maps: how to get our child to school the quickest, where a particular shoe repair shop is, a quiet place to take an evening walk. But such maps are generalizations; all maps, in truth, are generalizations, a vague sketch. One need only look at a Rand McNally to see where deserts lie, or farmland, or even burgeoning housing developments in the suburbs as enormous white spaces. As far as the map is concerned, there is simply nothing there to make a legend of.

But what Crum surely intends us to think is that the space in the maps is filled by our imaginations, the source of all legends. To map our city is a way to pinpoint a place where something significant happened. Such maps occur in the past: Here was my first kiss, here where my father was buried, here where I first saw a bald eagle. These are the survey markers of our lives.

A map, though, is also about the future: Here is where I need to be for my vacation next summer, the meeting tomorrow, the job interview next week. Or, as is often the case with us, here is the prettiest route, a drive through overhanging trees, with an occasional view of the sky.

“A city is many worlds in the same place,” writes Rebecca Solnit, and this is precisely because there are so many of us making maps. The world itself, coupled with our imagination, is the only map we will know. Were we to combine every map of the mind, as Crum suggests with the ever-changing video or the cyanotype resembling geology as much as cartography, we might, as William Blake suggests, see the world as it truly is: infinite.