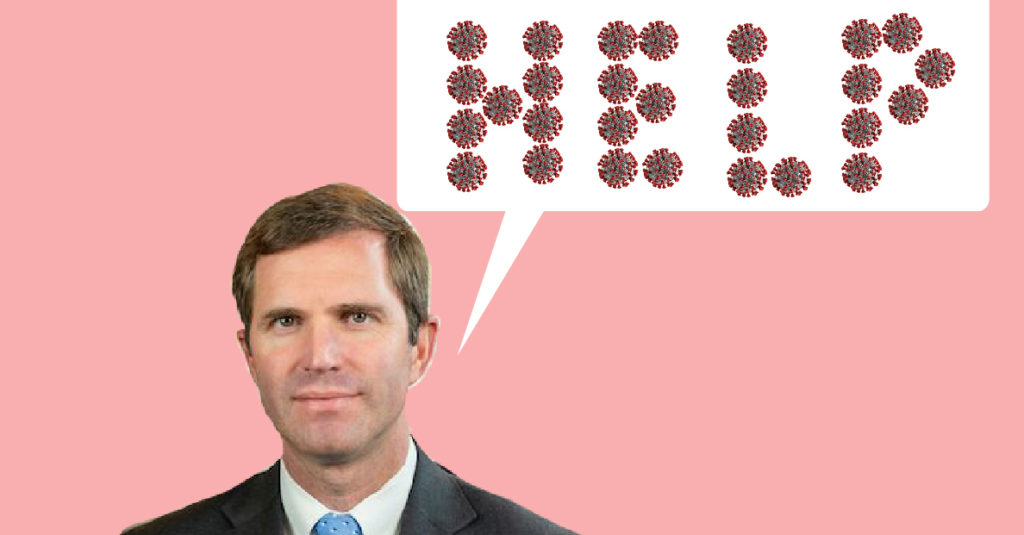 FRANKFORT, Ky. – It’s rare for a high-ranking official to seek advice publicly, but that’s exactly what Gov. Andy Beshear did Wednesday at his daily coronavirus briefing, seemingly at wit’s end when it comes to persuading Kentuckians to follow his emergency orders and help thwart the accelerating pandemic.

Beshear was asked by Melissa Patrick of Kentucky Health News (which I publish) about a Washington Post story that said “whole swaths of the country are simply tuning out the warnings from officials and experts.” Some of those folks said a new approach is needed “if there is to be any hope of persuading them to change their behavior,” as Melissa put it.

She said, “Some prefer a blunt approach. basically: ‘If you go see Grandma, you might be burying her at Christmas.’ Others think there’s a better way, by pulling in local people to tell these stories, and their experiences with COVID-19. So, what sort of approach are you planning on as we head into the holidays, to convince people to increase their compliance?”

Beshear replied, “All of the above. I will try any approach if it’ll help people do the right thing and help protect one another.”

“You sit up and night and think, ‘If I’d just said something, something different, or in a different way, would more people do it?’ And so you can come back the next day, and you try that, and then you try it again a different way. I’ll try any of it. And I hope people out there know that we’re doing the best we can, each and every day, and I hope it’s, I hope it’s good enough.”

If Beshear is judged only by the rising infection rate and COVID-19 deaths in Kentucky, it hasn’t been quite good enough. But that is true of almost any American governor in a pandemic politicized by an irresponsible president, in an era when people are less likely to trust experts, even those in public health.

Kentucky has fared better than most states in the pandemic, mainly because Beshear has been more willing to impose restrictions than most governors and because most of his constituents have been willing to comply. But too many don’t, and Beshear often shows his frustrations with them — and with those who question his approaches.

When two leading Kentucky economists said the state could get a better picture of the pandemic with random-sample testing, as the UofL’s Co-Immunity Project is doing, Beshear said the state had enough data from voluntary testing and threw a jab at them: “I know some economists, just from a value system, are more worried about, you know, economic impact than lives.”

That was an uncalled-for slur of Ken Troske, an endowed economics professor at UK, and Paul Coomes, emeritus economics professor at UofL. Their universities, the state Chamber of Commerce and the Foundation for a Healthy Kentucky all endorsed their random-testing idea in a letter to Beshear in June, and he didn’t even bother to reply.

Early in the pandemic, Beshear made up for his steep learning curve and his shortage of smooth articulation with an earnestness that seemed to reassure the public. But pandemic fatigue set in, the issues got tougher, and Republicans staked out positions at odds with the Democratic governor.

Beshear seemed to view all Republicans as politically motivated and didn’t reach out to their legislative leaders until he announced the latest round of restrictions — and then only to tell them what he was doing, without allowing enough time for their questions.

In a state that has gone overwhelmingly Republican and elected him only because the GOP incumbent had made himself unacceptable to many, that’s not only bad politics; it makes Beshear a less effective messenger.

He said Wednesday, “If there are those in the state and different parties that disagree with me, they’re disagreeing with Donald Trump’s White House,” which had endorsed his latest restrictions. He used the final phrase three times, apparently thinking it might persuade some Trump supporters to go along.

Sorry, Governor, that cake is mostly baked. Few of them seem to be listening. You said you welcomed advice, so here’s some: Do less talking, and let more of it be done by health professionals, especially at the local level by front-line health workers who have seen people suffer and die from COVID-19 — and by some victims themselves. As you said Wednesday, “People really need facts, and facts from a trusted source.”