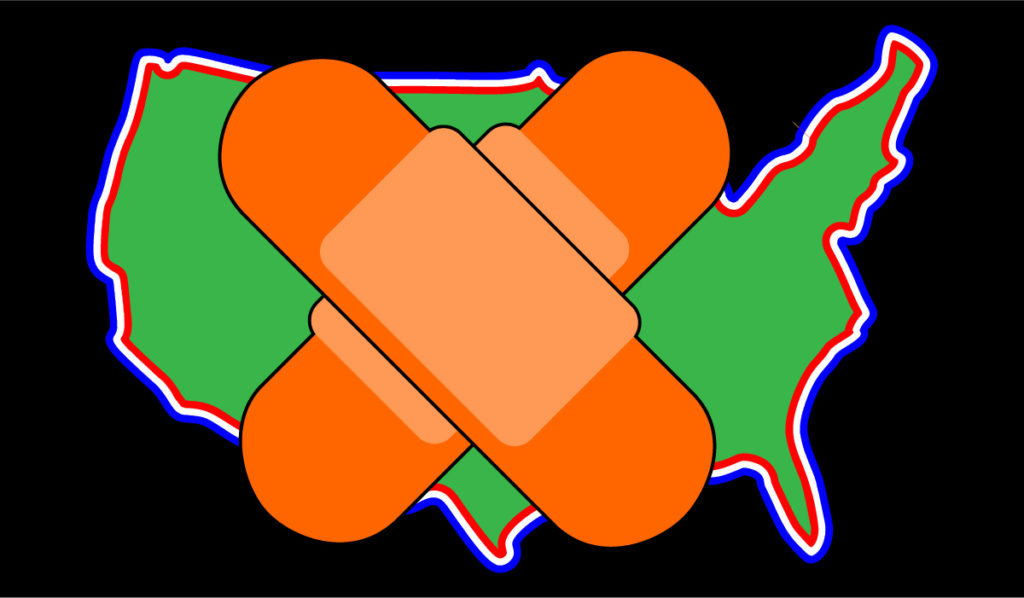 Regardless of what happens on Tuesday, America is broken in a way the removal of Donald Trump alone cannot fix. In the way cell phone video has exposed the brutal racism of our nation to those who are finally willing to believe with their eyes what our black neighbors have been telling our ears for generations, the pandemic has exposed our economic and social infrastructures for the wealth-serving, draconian frauds they have been at least since the rich convinced the white poor that taxes exist only to build a road to communism. The so-called political “division” hasn’t for a long time been between citizens of good faith with differing strategies to create a better country. There is in most respects now simply a right side and an irredeemable wrong side.

Even if he loses — and in the unlikely event he concedes without trying to finally execute our democracy — millions upon millions of Americans will have voted for a man who has moved past pretending to care about the truth, about the Constitution, about the world or about anything other than his own immoral interests. These millions, many of whom you know, work with, attend soccer games with and even celebrate holiday meals with, will have voted for him for reasons well known and well-explained elsewhere. For some of them, increasing their own wealth through the stock market, by lowering taxes and even by protecting their suburban property values is the limit of their interest in the “politics” they otherwise sneer at because they are insulated from the cruel world for others they help build.

Far more of those millions of Trump voters, however, are either the unwitting victims of the very economic and social strategies they support or have decided that protecting what has become their white Christian (in name only) world is worth the sacrifice. These are broad descriptions, but more detailed analyses paint these voters in no better light: The Catholics, for instance, dishonoring the Church’s social justice — truly Christ-like — tradition by supporting a man and a party who violate the Commandments and The Beatitudes daily in exchange for a so-called pro-life vote.

The pandemic rolled into the United States like the Germans into Poland because this nation — without universal healthcare, without guaranteed basic income, without even a national impulse to care for others institutionally ­— was quite literally the least-prepared and most vulnerable allegedly developed country on the planet. Not only was there no national strategy, but there were lies, disorganization and self-interest in its place. The states were left to decide that, ultimately, families and business could ironically only afford to survive the virus financially if they were forced to risk surviving it medically by “opening up.” The simple act of wearing a mask became weaponized and used by the president himself as a way to identify the weak and his enemies. The United States of America in 2020 decided, quite intentionally, that hundreds of thousands of deaths of mostly old and disproportionately nonwhite citizens were acceptable collateral damage. Like it always had.

In its history when it was doing great things it had its foot on the necks of the descendants of slaves and 155 years after the end of the Civil War, and even after these last months of marching we expect gratitude because *maybe* there will be revised Use of Force standards or some such thing for the police. The Democratic Party spent hundreds of millions of dollars this campaign cycle supporting candidates who can’t really distinguish themselves from their Republican opponents and even hope to appeal to Trump voters. America doesn’t have a tradition of a true opposition party, and that’s why we live less in a democracy and more in an oligarchy, in which power and wealth continues to be more consolidated in the hands of a few, and the systems are perverted to serve only their interests. Interests that pay no taxes, because their private helicopters and three-ton SUVs don’t need new roads, they pay for their own healthcare and private schools, and they don’t give a shit about you. We should eat cake, they would say.

There are no gallows outside our Bastille. But fundamental change can come through nonviolent means, and there were candidates this cycle willing to take the first steps down what will be a hard road.

Tuesday has to be a beginning, not the end.

Marc Murphy, a Louisville trial lawyer, is the editorial cartoonist for The Courier Journal.