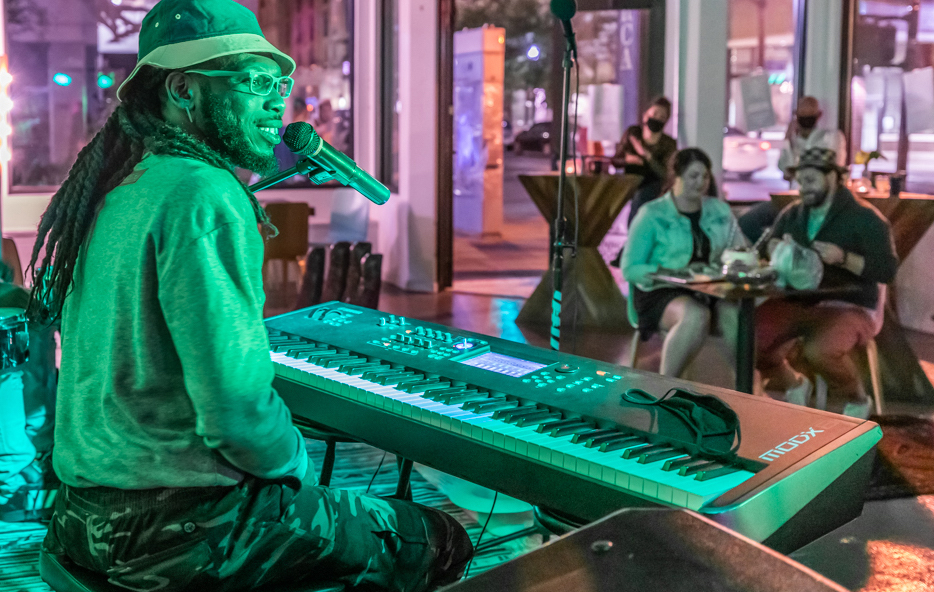 Zanzabar and Headliners Music Hall are trying to figure out booking a few outdoor shows before winter.

And Third Street Dive recently received a grant that will help save one of the city’s places for live music.

During a pandemic that’s been crushing to live music, the people who run Louisville’s independent stages have been working together to bring back shows and survive. For the last several months, local music venue owners and managers have been meeting to exchange ideas and collectively navigate the COVID-19 era. On Wednesday, they formally announced a coalition, Louisville Operating Venues Safely, or LOVS. It includes Headliners Music Hall, Zanzabar, Art Sanctuary, The Limbo, Third Street Dive and more than 10 other indie stages.

The primary goal is to set a standard of health guidelines that will be unilaterally enforced at each venue, but the group is also working to help each other with a range of challenges, including licensing issues, obtaining government money and innovative ways to increase revenue streams.

Several of the venue owners LEO talked with referred to it as a “support group.”

While the business-to-business benefits have been profound, LOVS founding member Scotty Haulter said that the main focus is on the customers, for the ticket-buyers to feel safe and informed when concerts pick up again.

“We want to welcome everybody back to our businesses with a healthy peace of mind,” said Haulter, who is also the production manager at Production Simple, the company that books shows at Headliners, Old Forester’s Paristown Hall and other places around town. “We are trying to do things the right way. If you come to a LOVS associated venue, we want you, the customer, to feel like you’re in a safe haven. We want to be transparent with the public on what the LOVS venues are doing and offer them some comfort in attending events at these spaces. Together we are the solution.”

The health guidelines from the group include that customers must wear masks unless sitting at a table eating or drinking, visiting artists and staff will get temperature checks, the audience will be required to social distance and all high-touch surfaces will be sanitized, including band equipment and merchandise. Each venue’s staff will undergo training for the guidelines.

When Riot Cafe hosted the band Keep Moving Forward last Saturday with a small audience of around 30, the venue’s owner Olivia Griffin said the LOVS safety measures provided a template.

“The guidelines are helpful, and we’ve been discussing them — making sure your customers feel safe, that you’re doing it safely,” she said. “Keeping them confident that they can go out again. That you can go out into the world and see live music, as long as you do it safely.”

Griffin, who also owns The Limbo, has been impressed by how the group has looked out for each other.

“It’s been really comforting to know that your venue is not alone in this struggle,” she said. “That everyone is experiencing the same thing, and lots of us are trying new and different things, so we get to share those with each other.”

From national group to local initiative

Through his work on a Louisville Tourism reopening task force, Haulter joined the national campaign Reopen Every Venue Safely, or REVS. Louisville was chosen as one of the 11 cities for the REVS pilot program, which aimed to connect the cities for a collaborative effort to discuss  the best practices during the pandemic.

On June 12, Haulter wrote an email to Louisville venue operators, to announce the news with hopes of forming a local collective. Part of it read, “Because of that I wanted to reach out and introduce myself and start a conversation amongst ourselves to ensure we work together to support and collaborate, share ideas, plans, thoughts, etc. as obviously we are stronger as a group, and I know you have some great ideas to bring to the table. Together I know we can make Louisville shine!! Ideally I would love to set up a conference call or Zoom sometime next week to start the process.”

From there, LOVS was born, and the group began to work on health guidelines and brainstorm numerous other issues that they experienced during the shutdown and reopening phases. Every week, the group gathers in a Zoom meeting to talk.

For some, the group has helped their businesses survive. Lynne Frost, owner of Third Street Dive, received a grant from the city via a program administrated by Louisville Forward, but she might have missed out on it if it wasn’t for LOVS.

“I really wouldn’t have known about it, and I wasn’t really quite sure how to do all that stuff,” Frost said. “You know, without those grants, there would be no more Third Street Dive. It’s also nice to know there are people out there wanting to do things right, instead of flagrantly disregarding the rules, like you hear about from other places.”

By all accounts, concerts won’t return to a relaxed, full-capacity setting soon, so the challenge has been for venues to find a path to providing entertainment in a safe and financially-viable way.

Every venue is a little different in terms of how long it will take before they can return to throwing shows. A small bar with a kitchen might be able to host live music because it is not as dependent on ticket money or filling to capacity. A midsized venue with no food and no outdoor space might have to stay closed because, with 6-foot distancing regulations, it can’t sell enough tickets (and therefore it also doesn’t have enough people buying drinks) to turn a profit.

So, while the members of LOVS have agreed upon health guidelines, that doesn’t mean they’re all going to simultaneously open. Everyone is moving at their own pace, but the group helps move everyone in the right direction.

Art Sanctuary has about 40 artist studios, which helps them stay afloat, but its president, Lisa Frye, said that the nonprofit isn’t quite ready to host concerts. Art Sanctuary has a livestream music series called “Late For Dinner,” which it uses to keep the momentum from the three to four events it used to hold per week. Frye said that they’re looking for other ways to merge the arts community and its patrons during this time.

“It’s been challenging, but it’s been nice to be able to bounce ideas off the other guys and see where they are,” she said.

Headliners Music Hall and Zanzabar are trying to set up concerts outside. Both have been confronted with regulatory and neighborhood issues, and the owners have been communicating with each other about it through LOVS to help each other. One similar problem is that each venue’s usable outdoor space is on an adjacent property, which used to mean they couldn’t extend their businesses’ liquor licenses across the address barrier. But thanks to a recent change to Kentucky law, they can apply to use their liquor license on a neighboring property with that owner’s permission.

Zanzabar co-owner Antz Wettig said LOVS has helped him plan to reopen. “I’m really thankful for that group because we all talk each other through hard times. I don’t think it started out to be like this, but I think it turned out to be a support group,” he said.

Under social distancing rules, Zanzabar would be allowed about 42 people in its indoor space, which has a capacity of 400, and is why Wettig wants to move the show outside before the winter.

“We’re all crossing our fingers for a break,” Wettig said. “Hopefully it’s a warm season like it was in 2017.”

Some group members knew each other before LOVS started. Some even have collaborated or worked together. But others had never met. From talking with several members of the group, it’s clear they’ve formed a community. The word “support” came up a lot during interviews. Several talked about not feeling alone through a difficult time for the entertainment industry. Even in the independent venue scene, owners can stay in a small bubble because they’re so busy with their own events.

LOVS has allowed them to expand their networks, Frye said. “As a venue owner, as much as you have events every week, sometimes three or four events, you don’t ever go anywhere, you just live under that rock of that venue, which is great, but this has been a good opportunity to learn how other venues work, and get to meet people who run venues, so you have like-minded people in the same spot,” she said. “You can kind of commiserate together a little bit right now, but just kind of knowing that you’re not alone, that’s been very welcoming.”

Allison Longino who manages Mag Bar, said that the group has kept her motivated.

She also said that the camaraderie and friendships formed from LOVS have been pivotal.

“I feel more connected to my community and the service industry than I have in a really long time,” Longino said.  •