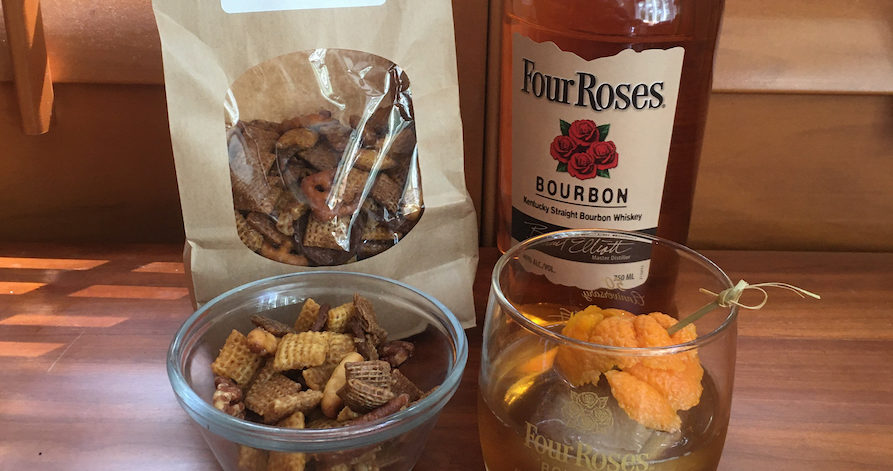 Farm to Fork Catering & Café ’s Bourbon Pecan Party Mix is the perfect pairing with Four Roses bourbon because it is itself a “party mix” of mashbills and yeast strain. | Photo by Susan Reigler.

National Bourbon Heritage Month is upon us, which presents a perfect opportunity to highlight the great variety of flavors in bourbons. Sure, they almost all exhibit the basic profile of caramel or vanilla or some combination thereof that sets bourbon apart from other whiskey styles. But there are many embellishments that result in bourbons being distinctly different from one another. And what better way to highlight the variety of bourbons than by pairing different bourbons with appropriate bites to intensify the flavors in both? Here’s a Bourbon Heritage Month tasting menu:

Sherry Hurley the proprietor/chef at Farm to Fork Catering & Café in Louisville’s Portland neighborhood has created a variety of snacks that are perfect for cocktail hour. Her house-made spreads included pimento cheese, Benedictine and a refreshingly different black-eyed pea hummus. Absolutely perfect with bourbon is her Bourbon Pecan Party Mix, a riff on Chex Mix that’s definitely addictive. Tiny pretzels, fat pecans, cereal squares and a medley of other nibbles have been coated with a sweet bourbon-infused glaze and baked for extra crispiness.

Because it is itself a “party mix” of mashbills and yeast strain, Four Roses bourbon is the perfect sip to pair with the munchies. The distillery uses two different mashbills for making its bourbons, one that is 75% corn and 20% rye and a second with 60% corn and 35% rye. Five different yeast strains each produce distinctive aromatics — delicate fruit, light spice, rich (dark) fruit, floral and herbal. That makes for 10 possible recipes. Four Roses Single Barrel uses one of them. Small Batch has four recipes. Small Batch Select incorporates six. And the Four Roses 80 proof (formerly known as Yellow Label) uses all 10.

So, enjoy the 80 proof in an Old Fashioned garnished with an orange peel, paired with the party mix for a lovely light pairing.

Bourbon and pork are natural partners. Try bourbon glazed pork chops sometime. I’ve already written about pairing bourbon and country ham. Bourbon and pork barbecue go together especially well. Head to Mark’s Feed Store for some carryout ribs. The smoky meat, with a good portion of chewy blackened bark should be accompanied with an appropriately smoky bourbon. I can recommend two.

Old Forester 1910 is pretty easy to find, being one of the expressions in Old Forester’s Whiskey Row Series. It picked up notes of smoke for secondary aging in a very deeply charred barrel. Less easy to find on store shelves is another smoky bourbon, which comes from MB Roland, a small craft distiller in Pembroke, Kentucky that produces an impressive variety of whiskeys. The distillery has a tiny building that you won’t find at other distilleries, a corn smokehouse. Think smokehouse for ham, only here the corn gets the treatment. It’s used in its Dark Fired Kentucky Straight Bourbon Whiskey, resulting in a strong smokiness that is the American equivalent of a peaty Scotch, but considerably sweeter.

Tip: If you like to make your own baked beans, add a slug of this to the pot to infuse the classic barbecue side with extra smoke.

Honestly, I do not have a big sweet tooth, though every once in a while, something light and fruity after dinner is just right. And somehow, I always seem to have room for ice cream. The dessert that fulfills both of these aspects of my taste is one that is a seasonal, summer treat. If you are lucky, there will still be some pints of Graeter’s Peach Ice Cream nestled in the freezer at your local grocery. Peach-scented vanilla ice cream is loaded with slices of fresh peaches, all peeled and cut by hand by the Graeter’s team. I know I’m not the only fan of this flavor, since Graeter’s stores always sport a banner each July declaring “Peach Ice Cream is Here!”

And the peachy bourbon to pair with the ice cream? Elijah Craig. It has an interesting mash bill that uses more malted barley than rye. (Usually the malted barley makes up the smallest portion of the grain recipe.) It’s 78% corn, 12% malted barley and 10% rye. A spoonful of the ice cream is guaranteed to create an explosion of the crème brulee and ripe peach notes so characteristic of Elijah Craig. There are many expressions of this bourbon from Heaven Hill with various proofs and age statements. The 94 proof is the most readily available and excellent in this pairing. But the distillery is also releasing a Toasted Barrel expression this month that adds some toasted brown sugar notes to the whiskey. The combination with the ice cream tastes like a cool peach cobbler.

You may be wondering why I haven’t mentioned that classic combination, bourbon and chocolate. After all, the bourbon ball is a signature Kentucky sweet. Many bourbons have notes of chocolate in them, too, with a wide spectrum ranging from light milk to dark. I tend to gravitate to the dark side here and like to nibble on a square of Ghirardelli Intense Dark chocolate bar or have a Lindt Lindor dark chocolate truffle as a small treat. As a nightcap, a finger of Old Grand-Dad 114 proof bourbon is just right with dark chocolate. It has strong orange peel notes that pair beautifully with the dark chocolate. Add a few drops of water to amplify the fruit and savor.

But the ultimate bourbon and chocolate pairing can be found in the bourbon-infused chocolates from Art Eatables. Chocolatier Kelly Ramsey carefully matches chocolate varieties to specific bourbons in her silky-smooth truffles. The shop offers four-piece books of truffles made with whiskey from most of Kentucky’s distillers. But the best bet is to get one for the multi-bourbon sampler boxes and taste your way through bourbon country, with accompanying sips from Beam and Bulleit to Wild Turkey and Willett.