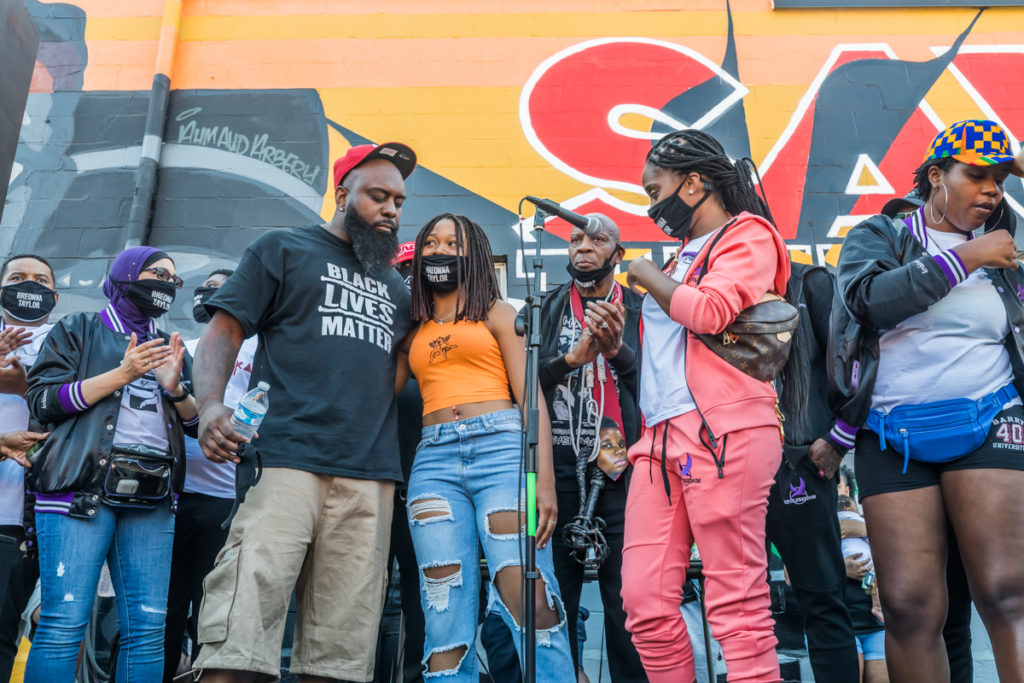 Michael Brown Sr. and Juniyah Palmer hugged at the rally on Saturday. Both have lost family members to police brutality. Brown lost his son, Michael Brown Jr. in August 2014, and Palmer lost her sister Breonna Taylor in March 2020. | Photos by Kathryn Harrington.

Until Freedom, which led the protest on state Attorney General Daniel Cameron’s lawn, held a rally downtown with the sister of Breonna Taylor, Juniyah Palmer, and Michael Brown Sr., whose son Michael Brown Jr. was killed by police in Ferguson, Missouri.

Organizers for Until Freedom, which is based in New York, said they will continue to work in Louisville for at least a month, until justice is delivered for Taylor, a 26-year-old Black emergency room tech who was killed by LMPD in March.

The group used the rally at 11th and Main streets to introduce itself to the Louisville community.

“We know this gets exhausting, we know that you are tired, and we want you to know that we are here to alleviate any of that exhaustion. We are here to inject whatever energy you need so the whole world turns their eyes to Louisville,” co-founder of Until Freedom Linda Sarsour told the crowd.

“We are also here to stand up for a Black woman, to defend a Black woman, because you can’t be marching around the country talking about racial justice and Black lives matter if you cannot even get justice for one Black woman in Louisville, Kentucky. And so what we hope to do with you in partnership with you as your neighbors is to get justice for Breonna Taylor and to send a message in every corner of this country, to every police officer, police commissioner, mayor, attorney general, governor, to the president of the United States, whoever they may be, that Black women will be protected and we will not allow this to happen on our watch.”

The rally featured several speakers including poet and activist Hannah Drake and performers including the No Justice No Peace choir.