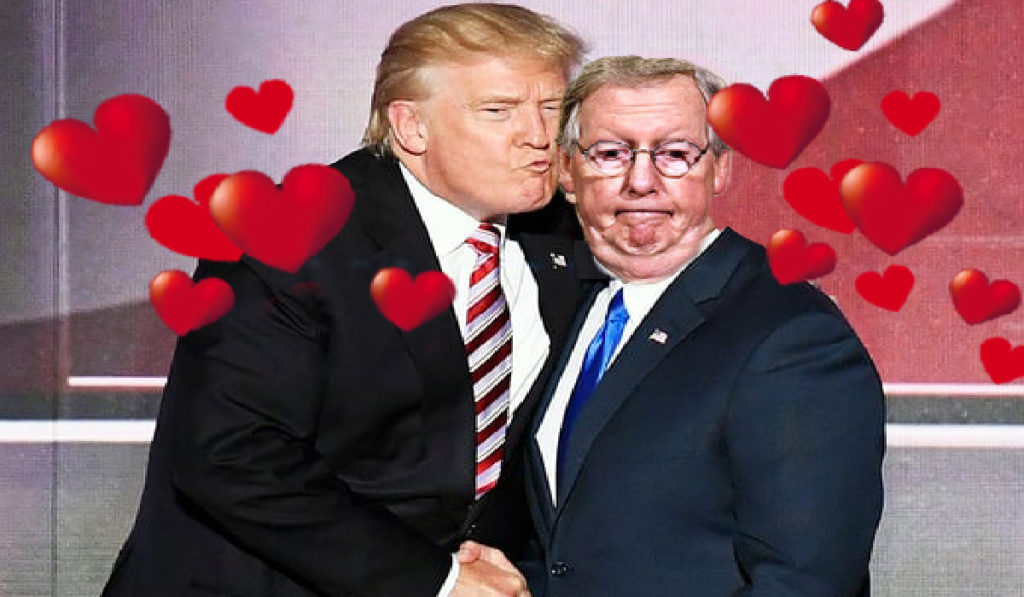 The last two times Kentuckians have re-elected Mitch McConnell to the U.S. Senate, his best logical argument has been his growing power: As minority leader in 2008, and would-be majority leader in 2014, why should a state with many needs give up such influence?

Voters say it again and again.

For most of his current campaign, McConnell has made a similar pitch, overtly in ads and subtly in “earned media” visits to places helped by his power as leader of Senate Republicans. But now his power is facing perhaps its biggest test, at a critical time for him and the nation.

Governance in Washington, for which McConnell has much responsibility, has broken down. Kentucky has been especially hard-hit economically by the coronavirus pandemic, but McConnell has been unable to deliver another badly needed relief bill. He’s removed himself from talks between the Trump administration and congressional Democrats because so many of his members, including Kentucky’s U.S. Sen. Rand Paul, don’t want to add to the national debt.

One McConnell priority as leader has been to quash divisions in his caucus, which would weaken both the caucus and his leadership of it. But what’s more important: keeping the caucus together or fighting a war, as Republicans like Ohio Gov. Mike DeWine call the pandemic fight?

The leader’s answer seems to be that when the time comes, he can deliver enough Republican votes to pass a relief bill, and that he is guiding negotiations by talking frequently with Trump and Treasury Secretary Steven Mnuchin (and maybe Trump Chief of Staff Mark Meadows, a former House bomb-thrower, who may be the main obstacle).

But if there’s a bill, what will be in it for Kentucky?

He may not need it to get re-elected. Polls two weeks ago had him 17 and 5 percentage points ahead of Democrat Amy McGrath; the latter poll, by Quinnipiac University, is more reliable, but the widely respected Cook Political Report still rates the seat as “likely Republican,” a label for races that are “not considered competitive at this point, but have the potential to become engaged.”

The notion that a majority leader in his sixth Senate term could lose his seat, in a state where his electoral wingman Donald Trump remains popular, may seem sketchy. But it’s a sketchy time, and that’s bad for incumbents.

Only one-fourth of Americans think the country is headed in the right direction, and the pandemic is wearing us down mentally and economically. Kentucky, with a larger share of people who can’t work from home, is worse off than most states. Trump has exacerbated the pandemic, and that has eroded his support in Kentucky, long one of his best states. That is not good news for McConnell, who, being less popular than Trump, has tied himself to the president.

In the Quinnipiac poll of registered Kentucky voters July 30 to Aug. 2, Trump led Joe Biden 50% to 41%, with an error margin of plus or minus 3.3 percentage points for each number. McConnell led McGrath 49 to 44, and by 43 to 48, most voters said they had an unfavorable opinion of him.

McGrath did even worse on that score, 32 to 42, probably showing scars from her narrow primary victory over Charles Booker, but 25% said they hadn’t heard enough about her. That’s one reason you see McConnell attacking McGrath in TV ads, rather than talking about his work for Kentucky.

He’s good at defining foes before they can fully define themselves.

Democrats want $1 trillion to shore up state and local budgets, which the pandemic has decimated. Gov. Andy Beshear says Kentucky needs a piece of that to avoid the largest cuts ever in its budget and services, but McConnell calls the idea a “slush fund to cover budget problems from long before the pandemic.”

That may be true of some states, but not ours.

Beshear said he hoped McConnell’s remark was only a negotiating tactic, and it could be. Maybe McConnell will deliver the aid, in return for liability limits. But McConnell also knows the pain of budget cuts wouldn’t be felt until after the election, and he may figure that Beshear won’t make it a Senate-race issue. But what good is Beshear’s popularity if he isn’t willing to use it?