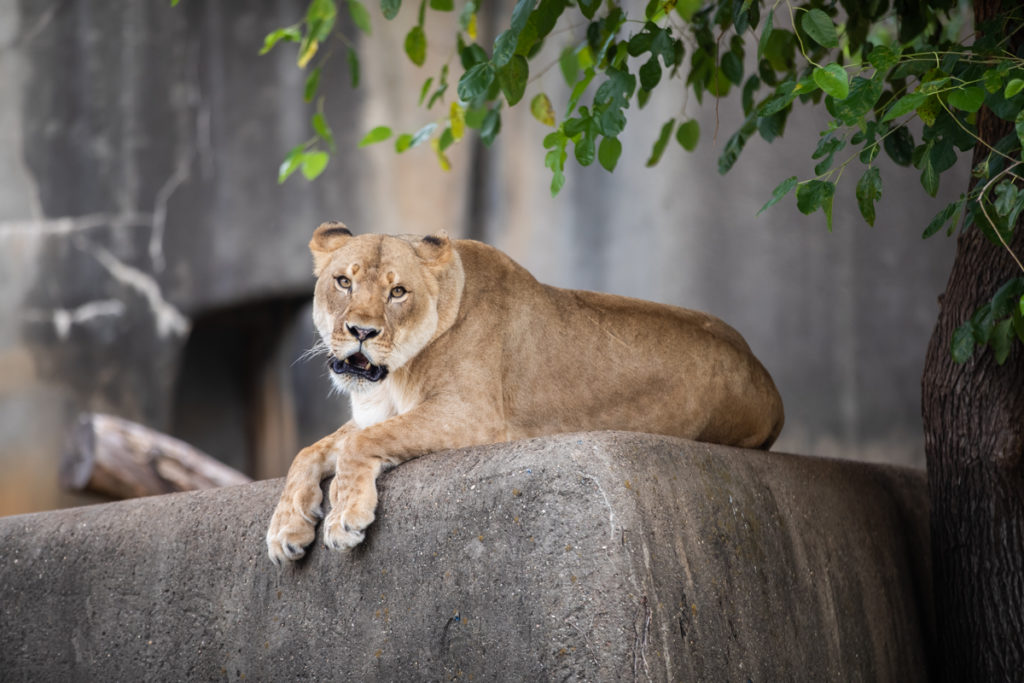 An African lion wants you to visit, but from afar for everyone’s safety. | Photos by Kathryn Harrington.

When the coronavirus pandemic reached Kentucky, most people were worried about themselves and their loved ones getting sick. Steve Taylor, assistant director in charge of conservation, education and collections at the Louisville Zoo, was also thinking about the wellbeing of his animals.

“With a lot of unknowns, you want to pay attention to what’s going on,” said Taylor.

COVID-19 can impact zoo animals generally in the same way it impacts humans. Research indicates that orangutans and ferrets are susceptible to it. And, big cats definitely can get sick after eight tigers and lions tested positive at the Bronx Zoo in April.

Beyond getting sick, the orangutans in particular missed the interactions they had with humans when they were forced to “social distance” from guests after the zoo shut down from March to June. Other animals were put on high alert by the lack of visitors.

The safety measures that the zoo adopted to protect its animals from coronavirus are also similar to the same ones that keep humans from getting sick: zookeepers wear masks, and it’s best for people to stay six feet apart from the animals when possible.

The Louisville Zoo’s black-footed ferrets are a precious creature.

These Great Plains prairie dog hunters were thought to have gone extinct in 1979 until a farmer’s dog found one, leading to the discovery of 18 more.

The U.S. Fish and Wildlife Service partnered with the zoo to start a breeding and reintroduction program that has sired 1,000 ferret kits, said Taylor. But, they’re still endangered. COVID-19 threatened the Louisville zoo’s population, as well as its orangutan and big cat collection.

Orangutans were Taylor’s first concern when COVID-19 hit Louisville. Their genetics are similar to humans, which makes them a prime candidate for infection. Early research hinted that ferrets would be, too. A study published in May in Science Magazine showed that COVID-19 attacked ferrets’ upper respiratory tract when they were experimentally infected. The only zoo animals in America known to be infected by coronavirus, however, are big cats.

On April 5, after the Louisville Zoo had already closed to the public, a Malayan tiger named Nadia tested positive for coronavirus at the Bronx Zoo after staff noticed she and seven of her fellow big cats started coughing and avoiding meals, according to an article on wired.com. Staff tested the rest of the tigers and lions displaying symptoms. Those came back positive, too.

Taylor responded to these developments by tightening precautions at the zoo. Animal health staff were split into two teams, so that if one group was exposed to coronavirus, the other team would be fine. They were also given PPE and told not to get too close to the animals if possible. The zoo severely limited access to the ferret exhibit to protect the endangered animals.

Once coronavirus became a possibility, Taylor felt as if every day, there was a new development that required a response from him.

“We had to make sure that we were going to be very adaptable and flexible to see whatever information comes our way at any point in time,” said Taylor. “So we worked 7 days a week around the clock trying to ensure the best that we could for our staff and for our animals.”

ANIMALS REACT TO NO CROWDS

The Louisville Zoo is open year round — even during Kentucky’s temperamental winters. So, when it closed in March, the animals were thrown off.

“Certainly the animals we have certainly relax and become accustomed to guests walking around the park all the time,” said Taylor.

Without those crowds, some of the “prey animals,” such as giraffes and antelope, became hyper vigilant when they heard someone on the path, said Taylor.

Orangutans, which enjoy watching people just as much as people enjoy watching them, lacked that extra bit of stimulation during the shutdown, too. Even the more aloof animals, such as the tigers and the jaguars, seemed to miss the crowds. John Walczak, the zoo’s director, said when he walked by them, they would pad over to the glass to greet him.

“They were looking for some of that engagement,” said Walczak, “because the public really is enrichment for he animals.”

On June 12, the zoo reopened to members, and animals were once again exposed to pointing children and amused adults. The safety measures that Taylor instituted, however, remain — with one addition. Humans must stay 6 feet away from animals, just like they do with each other, to keep them from getting sick.