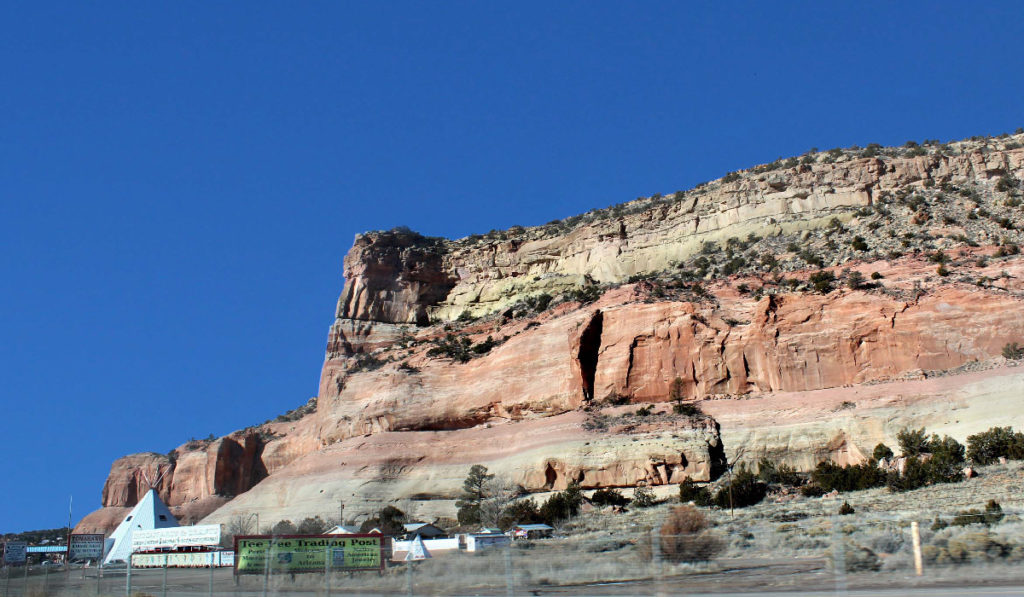 Day 2 of my quarterly-ish ActorDriveBackToLA began pre-dawn at the Motel 6 in west Oklahoma City. Probably ‘93 or ’94, winter — calling for the heavy jeans and the good sweatshirt, the one with my hometown’s NFL team logo. 863 miles, and I had to push hard that day — despite my history with Texas panhandle blizzards — because I had a serious stop, 700 miles in, at the Yellowhorse Trading Post, before finishing the day at Flagstaff’s Super 8.

At the butt-end of The Golden Age Of Cigarettes (the dark at the end of the tunnel was just ahead), I was determined to keep the faith as long as I could, legally — a happy addict to my menthols, which were being taxed out of reach, especially in California. But not in the sovereign Navajo Nation, no sir. No U.S. federal taxes on cigarettes. That was, like, a 40% discount.

So, each trip, going and coming, I hit the Yellowhorse just outside Lupton and filled the Sundance’s trunk with as many green cartons as I could afford. I had a dedicated plastic credit strip, used for nothing else, which I called “The Cigarette Card.” I could do without food; I would not risk a loss of nicotine access.

Because — Sweet Gods Of Preventable Disease — I loved smoking. And I was really good at it, thanks to constant practice. My trips to the Yellowhorse — where every American brand of cigarette was sold in bulk ­— were like my Christmas Gifts to me. So, on this winter day, I rolled into the Trading Post and took my time, browsing the blankets, the hats, the real and the imported crafts — just letting the anticipation build — before the junkie-rush of buying my stash.

In the parking lot, as I gleefully loaded the Sundance’s trunk with about 30 cartons of Merit Menthol 100s, a voice behind me called, “Sun Devils?” Now that I had my WinterSmokes put up, my mind was so clear that instantly I knew, without even turning:

A) The voice was addressing me, because…

B) On the back of my sweatshirt was the logo of my hometown NFL team (did I mention my hometown is Washington D.C.?), and I knew that…

C) The Arizona State University’s football team — The Sun Devils — had the exact logo — an American Indian head with a feather in his hair — and the same colors of my team. Easy mistake for these guys to make, from behind…

I smiled — feeling good, feeling happy, feeling so addict-relieved with all those menthol cartons that were MINE. I turned all smiley to the voice and I saw…two, young, Navajo (I assume, or Zuni?) men leaning on their truck, looking my way, apparently inquiring about my football allegiance. So, feeling as fit as a god, my nicotine needs all satisfied, I good-naturedly pointed to the front of my sweatshirt…

Where, in 8-inch scarlet letters on a field of white that covered my entire chest — was printed the nickname of my hometown NFL team, whose name I proudly pointed to and began my response to these nice, young brown men: “No, actually it’s the… ”

And in that millisecond, my brain froze and exploded as I tried to stop my mouth from the course it was on because I realized for the first time in my entire life all of this at once: My whole EasternLiberalExistence I had worshipped Washington’s NFL team, aspired as a child to being a player on the team (alas, my faulty genetics); I owned all the paraphernalia, the hats, the jackets, the T-shirts, The Sweat-F’ing-Shirts;

Holy Crap, that morning when I rose in Oklahoma ,City, I planned to stop at the Yellowhorse Trading Post on Navajo Nation land; and holyshit! — I put on this sweatshirt without any thought. And that evening, I slow-strolled a business run by Native Americans, taking my happy time, chatting with the clerk as I paid for my trunkful of cigarettes, turning to these young men in the parking lot all friendly and…

What I was wearing, as I loaded my car, turning to face the Navajo men and engage in a conversation about football, here, just off I-40, nestled up against the big rocks shining all SunsetRed…What I Was Wearing(!) All Splattered Across My Big, Bald, White Man Chest…

Was the Indigenous-American equivalent of The N-word. Which (unable to stop myself) I Then Spoke Aloud! And just in case they didn’t hear or understand — and before I could stop my finger — I Pointed At The Damn Word! — and proudly said: “Redskins.”

That’s when the “Freeze!” order from my brain finally hit home…I. Could. Not. Breathe. Could not erase my dumbass smile. Could not speak, could not move.

The two young men, who had trapped me so cleanly and expertly, just watched me die — silently, calmly, without expression — as if this was a recurring event in their world, the only variant being how lingering and humiliating the Caucasian death turned out to be. I wanted to moan. I suddenly wanted to explain. Apologize. Justify. Curse.

Nothing happened. Then, everything happened. My finger stopped pointing at my chest (retracted in shock, really) and all the brain-commands that had backed up and slammed into each other suddenly broke the dam and vomited out at once, my stupid-clumsy body trying to respond to all of them at the same time, turning me one way and then the other.

The self-preservation command hit my limbs, I dropped the Sundance trunk, spewed some grunty “goodbye”-“nice-talkin-to-ya” noise, jumped into the car and bolted off, grabbing I-40 west and alternating in my car between groaning sounds and curses, barely able to breathe normally for the rest of the day’s trip.

I bolted not out of fear — I bolted from my own existence in that moment.

Because I never realized how many times each day of my life I had uttered that R-word — the ultimate denigration of people Europeans had slaughtered, enslaved, poisoned and stolen everything from — the word that America’s capital had accepted as the nickname of its team (which had been moved there from Boston in the 1930s). It was simply my team’s name, and — no matter how many times I had heard John Wayne spit it out in ancient Western movies — not once in my life had I thought of it as a racial slur.

How Racist is that?

I had lived and died with my team’s success, and now I realized I could not speak its name again without pain, without seeing those two young men watching me say it.

How many times a day, a week, a month did those Navajo men have to read that word on the shirts-hats-pants of consumers at their Trading Post and force themselves to remain passive and civil?  How many Caucasian morons like me fell for their brilliant trap? How many realized they fell for it? How many still haven’t figured it out?

I’ve kept that R-word sweatshirt, but not worn it in all these years. This week, my hometown team’s management finally announced that the team’s name would be changed ASAP. Tonight is garbage night in my neighborhood. Maybe it’s time…