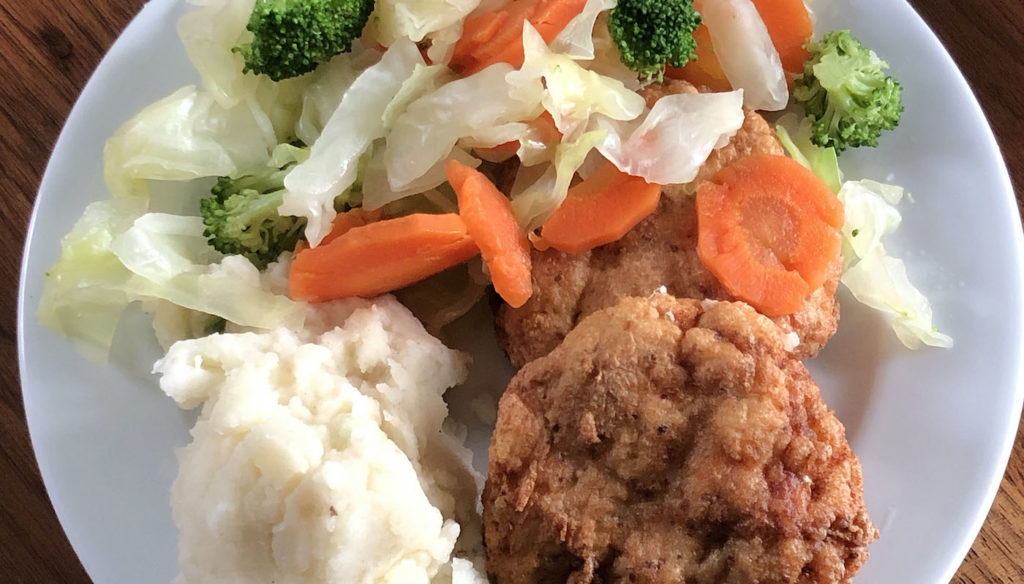 Shanagarry fish cakes at the Irish Rover are fashioned from a blend of smoked salmon and cod, served with veggies and mashed potatoes. | Photos by Robin Garr.

Some people crave potato chips or chocolate. The other day, I started craving Guinness stout. The more I thought about that dark, malty, bitter-chocolate beer with its creamy head so thick that you could float a farthing on it, the more I wanted a pint.

Thanks to Kentucky’s newly enlightened alcohol laws, a call to the Irish Rover put that right and got us a delicious Irish dinner to enjoy with it too.

As it turned out, when we visited the Irish Rover, the Frankfort Avenue eatery, like many others around town, was reopening that very evening under the state’s strict “Healthy at Work” regulations.

The Rover’s dining room is scheduled to open at one-third capacity in July, but the restaurant is now providing table service at its outside tables, with scrupulous sanitizing, masked servers and 6-foot distancing. There’s also no-touch pickup for takeout orders over long tables barring public entry at the doors.

Having passed enough birthdays to be technically considered in a risk group (harrumph), I stuck with takeout anyway, and the Rover handled it beautifully. Take that Guinness, for example. No, wait, don’t take it — it’s mine.

Until the pandemic prompted a fresh look at some of Kentucky’s more rigid alcohol-control laws, the idea of ordering a drink online, picking it up and driving it to your destination was pretty much unimaginable.

But within days after Gov. Andy Beshear ordered a halt to dining in at Kentucky restaurants, he and the legislature set up new rules. For the duration of the pandemic, at least, restaurants with liquor licenses may now offer beer, wine, liquor or cocktails for takeout or delivery.

This seemed worth celebrating with a pint of Guinness to go. Since the rules require that your booze-to-go be ordered with food, we summoned an Irish dinner as well.

Ten sandwiches, all served with Irish chips, are priced from $8.95 (for a salmon burger, Irish club sandwich with chicken and Limerick ham, a pub burger or Irish banger sausage roll) to $12.95 (for a fried basa sandwich).

Fifteen starters, soups and salads range across the British Isles and beyond, such as British bubble and squeak ($3.95), the Rover’s delightfully filling Scotch eggs ($4.95), cordon bleu fritters ($5.95) and Louisville’s own benedictine ($6.95).

Draft beer taps feature a half-dozen standards, including Guinness and its paler sibling, Harp and six more rotating taps with regional craft beers. You’ll find broad selections of bourbon and single-malt scotch and an extensive Irish whiskey collection, of course, with more than 40 bottles for your enjoyment.

I placed our order online, provided my phone number and headed over to the Rover. Right on time, I got a text: My order was ready! They would have brought it to my car, but the no-touch pickup seemed so safe that I went up to grab it.

All our food was neatly bagged, with the Guinness presented separately. It came in a sturdy Guinness-branded plastic cup that fit neatly in my cup holder and was securely closed with plastic wrap and a tight-fitting lid. Here’s a tip: No matter how tempting it looks, the law still rules firmly against having an open container in the car, much less drinking from it. You can’t be doin’ that!

We headed home and set up the dinner on proper plates and the Guinness in a pint glass, and I was delighted to see that the properly drawn beer had held up very well. It was cool, not cold, as it should be, and the pale-tan head remained thick and creamy.

Our dinner dishes and sides were appealing, too. Shanagarry fish cakes ($11.95) come two to an order, fashioned from a blend of smoked salmon and cod. The hefty cakes, at least 3 inches across, were firm yet light, expertly bound-breaded and fried light golden brown. It came with a generous portion of fresh, carefully prepared steamed carrot, onion and cabbage slices and broccoli florets, all cooked until tender but not overcooked. Even au naturel, with no butter or oil, they were just right. Irish champ — mashed potatoes dotted with slivers of green onion — added a real comfort food touch.

A Welsh Rabbit sandwich ($9.95, plus 50 cents for red-onion slices) was tangy and spicy, a grilled-cheese sandwich for grown-ups. It’s not the traditional rendition with creamy, buttery hot roux-based cheese sauce but a simpler version, a deli slice of yellow cheddar slathered with coarse, grainy mustard between slices of the Rover’s excellent, white sourdough bread. Who needs tradition? This was simple fare, flavorful and filling.

A quarter-loaf of soda bread ($1.50) made an appetizing side dish. The Rover’s version is a good one, dense wheat bread with a chewy crust, a bread made to be slathered with the best butter you have.

Dinner for two, including the Guinness, came to $34.44, plus the 25% tip that really needs to be the standard in these troubled times.