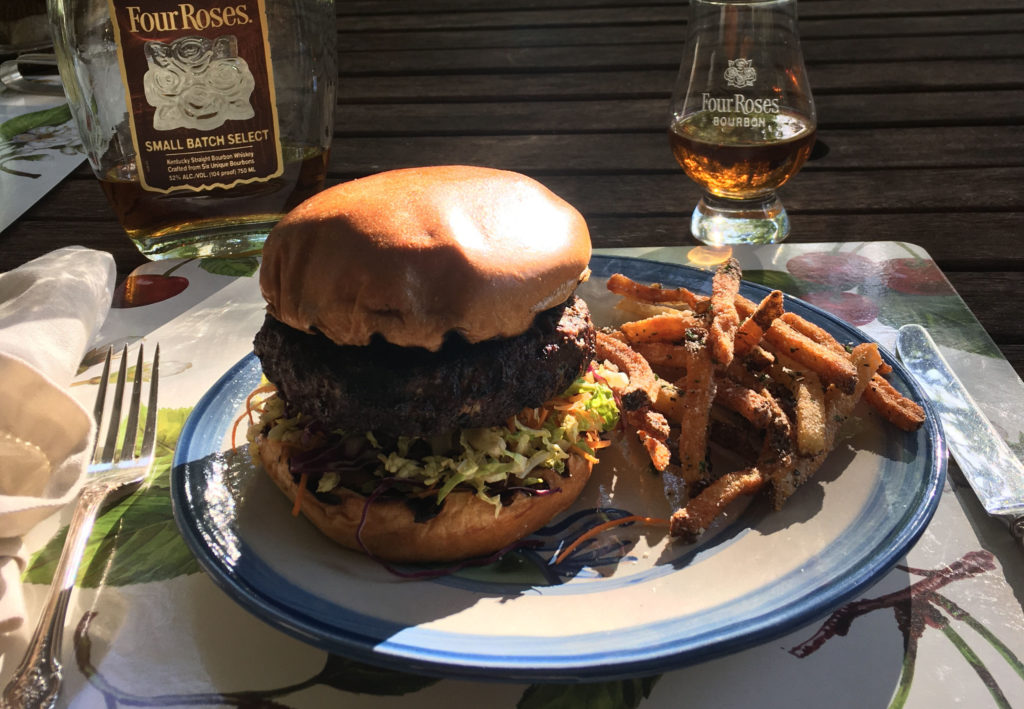 It’s not merely alliteration. Beef and bourbon go very well together. Perhaps it has to do with the contrast of sweet whiskey notes with the savory meat. Whatever bourbon you choose should definitely be on the robust side, so avoid the 80-proof lightweights. Think of it as finding the robust red wine equivalent of bourbon, rather than the rosé.

Also bear in mind the sauce on your beef. If it has been treated to a vinegary marinade, you’ll want a sweeter bourbon to help soften the astringency. Cream sauces do well with yeasty bourbons.

And while bourbon makes an excellent companion to steak, know that you don’t have to break the bank for a classic pairing. Bourbon is great with burgers, too. Our fair city’s restaurants serve many fine variations on the classic hamburger theme. Here are a couple of examples matched with appropriate bourbons. Both burgers are available for curbside pick-up while we are all still cautious about venturing out. Plus, a recipe is included for grilling a bourbon burger at home.

The Uptown Burger from the Uptown Cafe

It’s certainly not surprising that one of Louisville’s oldest and most consistently reliable restaurants has an excellent burger on its menu. Served on an English muffin with the classic array of tomato, lettuce and onion accompaniments, the Uptown Burger is distinguished by an intriguingly toothsome Pickapeppa mayonnaise. The classic, Jamaican sauce seasoned with tamarind and peppers happens to be aged in oak barrels, just as bourbon is. It’s a tiny bit spicy and wonderfully savory. Blending into the mayo makes it spreadable without making it overwhelming.

Pair the Uptown Burger with Old Grand-Dad Bottled-in-Bond. This high rye mash bill, 100-proof bourbon is a stellar bargain at around $20 a bottle. The spice notes from the bourbon are great with the Pickapeppa and the beef. Since it’s summer, you will not be chastised for adding a small ice cube to the bourbon. (Plus, it helps release more of the dark fruit notes in the bourbon, which echo the raisin also used in brewing Pickapeppa sauce.) The Uptown burger is $14.95 with a $2 add-on for bacon.

Bourbons Bistro serves its hefty half-pound burger on a brioche bun and tops it with cheddar, buttermilk slaw and a sweet and tangy maple bacon barbecue sauce. Any red sauce, barbecue included, needs a high intensity bourbon to stand up to it and the newest expression from Four Roses, the Small Batch Select, fits the bill. Weighing in at 104 proof, it is also non-chill filtered to retain as much complexity as possible and aged for a minimum of six years. Adding to that complexity is the use of both of Four Roses’ mash bills and three of its five yeast strains, which is described by the distillery as being “delicately fruity, slightly spicy and herbal.” In short, there’s a lot going on in the glass and it easily matches the kaleidoscope of ingredients on the bun.

If a large portion of ground beef is not quite enough protein for you, there’s the option of adding apple-smoked bacon, pork belly or a fried egg to the burger. I assume you could add any combination of these. Go ahead. The Four Roses can take it. The spices in the whiskey lean toward the clove and nutmeg camp, which works very well with the sauce. Included with the burger is a generous side of Parmesan and herb dusted fries.

Bourbons Bistro has reopened for indoor and patio dining, but it continues to offer curbside service. You can see the complete menu, as well as the bourbon list, on its website and place an order by calling.

Finally, chef and food historian Albert Schmid, who taught in the culinary program at Sullivan University before moving to South Carolina where he is the director of the Culinary Arts and Hospitality Management program at Guilford Technical Community College in Jamestown, has a recipe in his award-winning “The Kentucky Bourbon Cookbook” that includes the whiskey in the burger mix. He recommends cooking the burgers on a charcoal grill, “The smoke of the grill complements and accentuates the bourbon in the burger – remember that the bourbon was aged in a charred barrel.”

With that smoky char in mind, the bourbon to pair with Schmid’s burgers has to be Old Forester 1910 Fine Old Whisky. It has the same mash bill as the classic Old Fo – 72% corn, 18% rye, 10% malted barley – and it is a bit higher in proof — 93 rather than 86. But the main difference is that after the initial aging (typically batched from 5- to 7-year-old barrels), it spends additional time in a second barrel that has been so deeply charred that it would fall apart were it not for the iron bands holding it together. The resulting bourbon has a deeply aromatic smokiness.

Note: If you are using coals, be sure to start the grill at least one hour before you want to grill the meat.

1. Mix the ground chuck with the salt, pepper and garlic. Add the bourbon and bread crumbs and mix well. Separate the mixture into four to eight patties and refrigerate.

2. Start the grill, and when it is hot, place burgers on the grill. When blood begins to appear on the burgers, flip them and grill until done. Generally speaking, burgers should be cooked medium well, which means there will be a little pink inside the burger.

3. Place the burgers on buns and dress with onion slices and condiments.