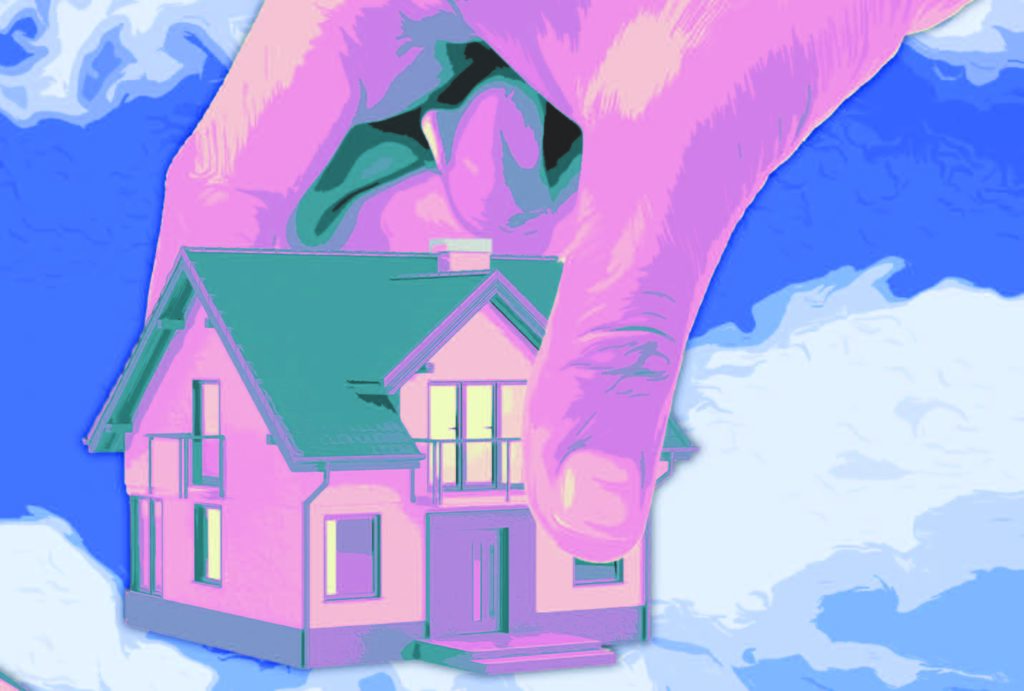 Lew Fox is not paying her rent because she says she cannot afford to since being laid off, but a statewide ban on evictions has allowed her to stay in her Germantown home.

Now, tenants, landlords and advocates are looking ahead to when eviction protections are scheduled to be lifted in June.

Louisville landlords say that 25% to 30% of their tenants are not paying their rent, according to a survey from the Louisville Apartment Association of its members. And those numbers are expected to worsen this month.

The pandemic has pressured tenants but also landlords, who have mortgages and bills to pay. Fox’s landlord, Lynn Summerfield, owns 22 properties, and she said without her tenants paying rent, she can’t afford her mortgages.  “I do have fairly large loans for my properties,” she said. “It’s a lot of hard work.”

JD Carey, president of the Louisville Apartment Association, said this is a common problem for smaller property owners. “Everybody is facing some type of financial crisis,” he said.

What can be done?

Fox, who lost her restaurant job in March, has received her stimulus check of $1,200 and her first week of unemployment, which is $350, plus an extra $600 from the federal government provided by the CARES Act. Her rent, which she splits with a roommate, is $780 per month.

But, Fox’s roommate has not received her unemployment yet, and it’s not just this month’s or next month’s rent that Fox is worried about. She wonders how long she can keep going if she spends a good chunk of her money on rent now.

“I do have some savings, but I don’t know how long any of this is going to last or how long it’s supposed to last me,” she said. “What if I can’t go back to work for a year?”

That’s why Fox is participating in a rent strike along with the Louisville Tenants Union, Broken Hearted Homes Renters Association and a coalition of other groups that want to bring attention to the struggle of some Kentuckians to pay rent. Their goal is for the government to adopt measures to help out renters, including a rent freeze, which would prevent landlords from raising rent during the pandemic, as well as the more drastic measure of total rent forgiveness.

Princeton University’s Eviction Lab, which collects national data about evictions, says that to prevent mass evictions, state governments should take steps to reduce rental debt for tenants who can’t pay up. This could include a rent freeze and rental assistance programs.

The housing advocacy groups wrote a letter to state officials in April asking for $50 million to be set aside for helping renters. Excusing late fees could also contribute to long-term relief for tenants, according to the Eviction Lab, so they don’t fall ever further behind on rent.

Shameaka Shaw, founder of  Broken Hearted Homes, said the federal benefits under the CARES Act — extra unemployment and a stimulus check — are not enough for all Kentuckians to pay rent.

She works primarily with West End homeowners. For those who have lost their jobs, this time is particularly trying because they face extra costs, including the cost of more food for children who are at home all day, as well as laptops and other technology for their at-home school, she said.

Rent forgiveness would completely wipe out rental payments for tenants while the pandemic continues and would also halt mortgage responsibilities for property owners.

In a Courier Journal op-ed, the Kentucky Coalition to Cancel Rent, a group advocating for rent forgiveness that includes Broken Hearted Homes, wrote that the $50 million sought for rent assistance would not be enough. By their math, $50 million divided among 200,000 homes (a third of Kentucky’s renters — their estimation for how many households cannot pay rent) is only $250 for three months’ rent.

U.S. Rep. Ilhan Omar, D-Minnesota, has introduced a bill to cancel rent and mortgage payments while the pandemic lasts. The Rent and Mortgage Cancellation Act would establish a relief fund for landlords and mortgage holders to compensate them for their canceled payments, and it would create another, optional fund for nonprofits and state and local governments to purchase private rental properties in order to expand affordable housing.

The bill from the progressive liberal Democrat would have to get through the GOP-controlled Senate.

The passage of rent forgiveness is unlikely, said Carter, although he’s advocated for it personally outside of his job at KEJC in a blog post on Medium titled “Just Print the Money.”

No state has offered full rent forgiveness to tenants, but several have gone further than Kentucky, which is ranked 16 out of 50 by Eviction Lab’s COVID-19 Housing Policy Scorecard. The organization gave Kentucky 2.65 stars out of five based on how many protections for renters the state has and how effective they are.

Delaware has halted foreclosures, is enforcing no late fees on rent and is providing $1,500 to renters who cannot afford payments. Connecticut is preventing landlords from reporting unpaid debts to credit bureaus and Washington is not allowing landlords to raise rent until June 2.

The most important thing for tenants to do right now, according to Carey with the Apartment Association, is to communicate with their landlords.

“Nobody in multifamily (housing) wants to evict somebody, OK,” he said. “For one, emotionally, it’s a hard thing to do. Two, it’s costly, and you don’t want to evict anybody.”

Even though late fees and other financial penalties are allowed under Kentucky’s eviction moratorium for non-federally subsidized housing, the landlords that Carey has heard from are willing to offer payment plans and to suspend late fees for their tenants if they know that they’re struggling financially, he said.

The Kentucky Equal Justice Center also advocates for tenants speaking with their landlords if they cannot pay rent. And, if they can pay rent, the organization recommends that tenants pay it. Some landlords have done a better job of communicating with their tenants than others.

Cris Banaszynski was unable to pay his April rent in time after all of his revenue streams were cut off, including his job at the Toonerville Deli. On April 14, Broadway Management Group sent him a letter saying that he had been charged a $40 late fee and, if he didn’t pay his rent in seven days, the company would start eviction proceedings.

This was two weeks after the Kentucky Supreme Court stopped eviction filings in the state.

The letter also said that Banaszynski could contact an account manager if he could not pay his rent, but it was the same account manager who sent the letter that Banaszynski perceived as “threatening.” He said he felt pressured to pay his rent as soon as he got his unemployment check, even though it left him worried about affording food the next week.

“I think we’ve been programmed to feel fear or panic when we get a threatening letter like this. I think it’s a human response to feel that way,” he said. “It’s really dirty and underhanded.”

Broadway Management President Greg Popham said in an email to LEO that the company should not have sent letters saying that eviction proceedings were about to begin. The company’s letters now say that Broadway Management will pursue evictions once the courts allow it.

“As the Governor says daily on his broadcasts ‘that is on me,’” said Popham.

Broadway Management is helping residents get financial assistance from various groups in order to keep them in their homes, said Popham. The company will also waive late fees depending on the tenant’s circumstances.

“Certainly, we would waive charges for a resident that has filed for unemployment and has not yet had his claim processed,” Popham said.

For Fox, if she weren’t participating in the rent strike, talking with her landlord could be a solution or at least a Band-Aid for her struggle to pay rent.

After Fox’s roommate told their landlord, Summerfield, that they would not pay April rent, Summerfield said in a text that she would not charge late fees, but she would turn their rent “in for collections” at the end of the month. In the text and to LEO, she said that collections could be avoided if they could come up with a plan together.

“As long as I hear from them and they say, ‘Yes we filed unemployment, and we do plan on paying you,’ I’m just going to take their word for it and wait it out,” said Summerfield, who has four tenants who are not paying their rent at this time. “But if I don’t, it’s very disconcerting.”

Summerfield has a daughter who also lost her job. She paid her rent after receiving unemployment, Summerfield said.

Fox said she is not like Summerfield’s daughter. Her mother died a couple of years ago, and she has no safety net. She also has asthma, which could put her at higher risk of complications from COVID-19 and extend the amount of time she’s out of work.

“Not everybody has the same situation,” she said.