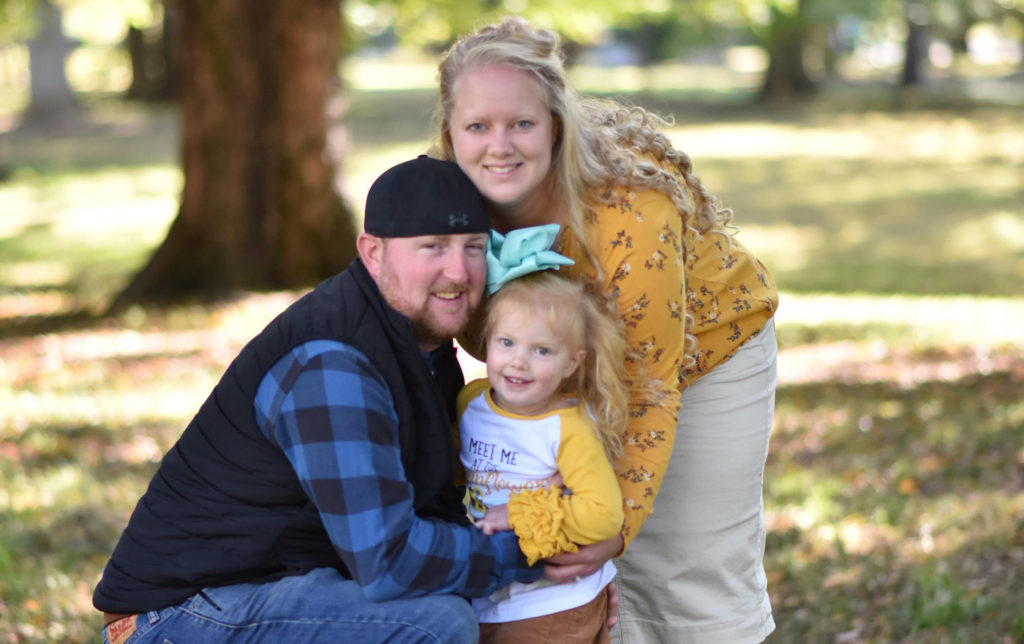 Anthony and Karlee Miles and their daughter Brinnley.

When Anthony and Karlee Miles found out that their employer, Toyota in Georgetown, Kentucky, was temporarily shutting in mid March, it was a relief compared to what they were facing at first: no child care for their 3-year-old daughter.

Gov. Andy Beshear had ordered child care facilities closed along with much of the state economy.

“You know, child care — it was the biggest struggle we had,” Anthony said.

Now, two months later, Beshear is reopening parts of the economy, including factories, retail, hair salons and other businesses, and the question of what to do about child care has reemerged.

The answer is not satisfying for some.

Child care centers will remain closed until at least June 15, and, even then, they’ll reopen in a reduced capacity, said Beshear in a recent briefing. Summer day and sleepover camps, another form of child care for parents when school is out, are also expected to open on June 15 if they abide by the same safety measures as daycares.

“We want to have a safe plan for child care, knowing that this is such a challenge for people,” Beshear said.

The state is allowing parents who cannot find child care to remain on unemployment, but it’s not clear what consequences they might face from their employer. Beshear’s office did not respond to a request for comment about this question.

Alan Keck, the mayor of Somerset, Kentucky, wrote an op-ed in The Courier Journal saying that without the opening of the state’s child care centers, the economy won’t be able to fully rebound either.

“If employees cannot work because they have nowhere to take their children, our people and our economy will continue to suffer,” he said. Kentucky’s parents are already making tough decisions about how to go back to work without child care.

At first, Anthony and Karlee thought they were going to have to drive their daughter Brinnley five hours away to Michigan to live with Karlee’s family. She has never spent the night away from home.

“It was serious,” Anthony said.

But, then, they found a sitter for their daughter, an employee at their old child care center.

This isn’t in line with Beshear’s social distancing rules, but breaking those has become a necessity for some parents, like Stacy Deren, a veterinarian at St. Matthews Animal Clinic. She has been taking her son, Brooks, to stay with her parents a few days a week. Her job requires her to be at the office, and her husband, Mike Deren, an actuary at Humana, is too busy in the spring to take care of Brooks while working from home. Deren has also dropped one shift per week to ease the burden of child care. Still, she feels lucky.

“Our clinic is always very family friendly and a good place to be employed as a woman and a mom and a person who has a family,” she said. “But I think about families that maybe have both parents being essential workers, if doctors and nurses are married or things like that, and maybe people who don’t have a lot of family available close-by in town, I think it definitely can be very challenging in those situations.”

Her coworker, Raynell Niemann, a veterinary technician, has her own child care issues. Niemann went back to work on May 9 after being furloughed for a month and a half. But she will only be able to work weekends as her husband, Alex, has to be outside the home for his job as a data communications installer during the week, and someone has to be home to take care of their three children.

For her, it’s not a problem — she thinks she’ll still receive unemployment because her hours will be so few. If not, she thinks the clinic might be able to supplement  her pay with funds from the Emergency Family and Medical Leave Act.

“If I’m not able to get those kinds of funds with only working 16 hours a workweek, then yes, it would present some problems, and we would need to figure out something to do,” she said.

Some employers have made accommodations for employees. GE Appliances’ Union President Dino Driskell said in a text that IUE-CWA Local 83-761 members are currently allowed to stay at home and collect unemployment if they have child care issues, even though the factory is open. This option is available to them for at least the next two weeks.

When child care facilities open in June, it’s not clear how they will operate or how many children will be allowed to attend. Beshear has addressed this question in past briefings, saying that the state is still coming up with a plan. Whatever it is, children will be “very monitored” and kept separate from one another.

“We’re trying to set the type of parameters that we believe could be healthy, and we’ve seen some of those parameters in other states which we’re looking at right now,” he said.

In an interview on May 8, Greater Louisville YMCA CEO Steve Tarver said he wasn’t completely sure when, whether and how the nonprofit’s 11 summer camps will be able to open. This was before Beshear announced that camps could open in June.

“We are very hopeful that we can salvage summer at some level but safety will be our guide,” he said.

Once child care opens back up, some parents might be apprehensive about sending their children. Deren thinks Brooks will go back sometime this summer, but there are safety factors to consider: Her parents are worried about him bringing back something to them or even Deren’s grandfather who her dad still takes care of.

“You have to think about the full effect,” she said.

For Niemann, it won’t be much of a reprieve at all. Her daughter goes to day care, but her two sons are school aged.

Anthony Miles, the Toyota employee, does worry a bit about sending his daughter to a sitter while the pandemic continues: He fears that the sitter might get sick. But, when he goes to sleep at night, at least his child will be in the same home as him. •