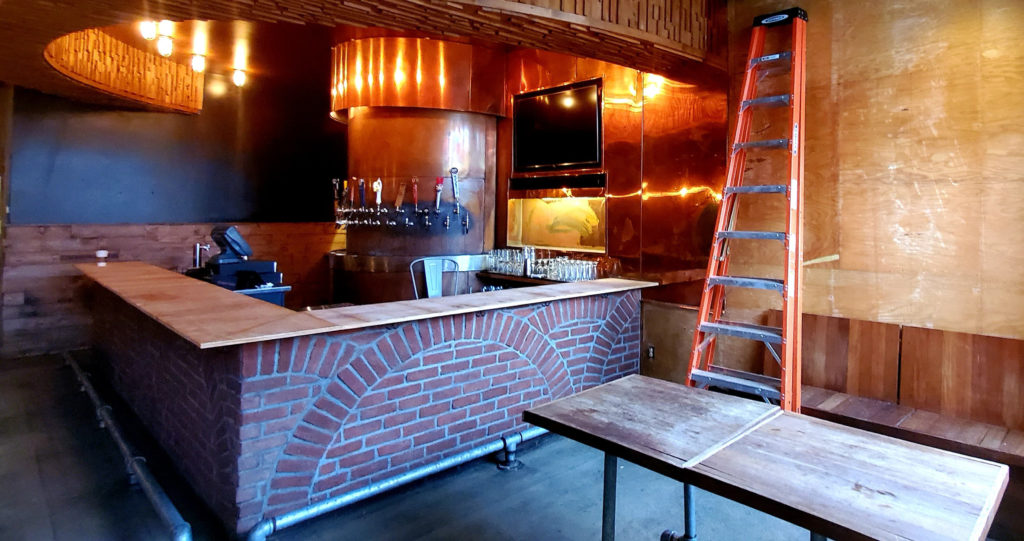 Faces Bar/Bistro was on its way to opening when the virus hit. | Photo by Eric Morris.

Eric Morris has lived through many an opening day, both as a restaurant employee and as an owner.

Usually, he’s “running around, stressed out,” according to the Louisville chef and former owner of Gospel Bird and Hull & High Water in New Albany.

But on April 1, the day when Morris’ third restaurant, Faces Bar/Bistro on Bardstown Road was supposed to open its doors, he instead stood in an empty building, mopping the floors by himself.

The coronavirus pandemic had shut down the dining rooms of all restaurants in Kentucky and pushed back Faces’ opening day indefinitely.

“I’m not working, and I have a silent partner, and between him and I, we’ve put a lot of money into this,” said Morris. “No loans — it’s all personally funded, and then to have to sit back and go, ‘Oh, OK, now I have to budget for my own bills and my own being, existing and children, on top of what I just put into the restaurant space, is, yeah, it’s terrifying.”

Faces, a small plates concept with a focus on lighter fare, is not the only local establishment in this position. NoraeBar, a NuLu karaoke spot was supposed to open two weeks ago as was Barn8, a swanky, farm-to-table concept in Goshen, Kentucky that is owned by 21C Museum Hotels founders Laura Lee Brown and Steve Wilson.

In some ways, Morris is in a better position than many of his restaurateur compatriots who are already open, he said.

Morris hopes that Faces could open as soon as June. Unlike other restaurants that have turned to carryout and delivery, including NoraeBar and Barn8, Morris must keep Faces closed. All of the boxes he needs to check to open his restaurant — a health inspection, liquor license and his own certification classes — have been delayed or are infeasible for now. Even if Gov. Andy Beshear lifted Kentucky’s ban on in-person traffic to non-life sustaining businesses, it would take at least another month for Faces to open.

Morris refuses to entertain the idea that Faces may never be.

“No,” Morris said, “our landlord here, he owns two separate, very successful restaurants, a restaurant group here in Louisville, so he gets it. He understands. He’s been really cool so far.”

That landlord is Chad Coulter, the owner of LouVino and Biscuit Belly, who said he is not asking for any payment from Morris in April.

Plus, there is the money that Morris and his partner have invested — at least $20,000, estimated Morris.

“With the amount of money that we’ve both put in, there’s no turning back,” Morris said.

He won’t reveal who his partner is, but Morris assured that the mystery investor is financially well off.

Still, there could be a point in time when Morris, who is currently not working anywhere else but the empty Faces, might have to reevaluate.

“I mean, if this were to last two, three more months, then I don’t know what we would do,” he said.

Coulter, a landlord and a restaurateur who rents space from other companies, is experiencing both sides of the problem. And he doesn’t know how long all parties in the restaurant industry — the owners, the landlords and the banks — will be able to make accommodations.

“Everyone’s, at this point in time, helping each other and being friendly,” he said. “Now, if this thing goes on for several more months, and we can’t reopen, I think it might get really interesting to see are people, can they even help anymore? And it might get a little ugly to be honest.”

There are positives to Morris’ situation. He’s been given more time to tinker with ingredients and work on the flow of the restaurant, he said.

Every restaurant owner, depending on what stage of life their project is in, is experiencing their own kind of pain, said Coulter. Restaurants that have just opened are missing out on those crucial first few months when they can make back much of the money that was lost in getting started, like a LouVino location of Coulter’s near Indianapolis. Those that have been open for multiple years are seeing the layoffs of longtime employees.

“Obviously, the anticipation and all the work you put into something, doing a concept and spending money on the space itself to renovate it how you want it for that specific concept, and then to be told you can’t open it, It can be, it can be pretty devastating,” he said.

And Morris has been working on getting to this point in his career longer and harder than most.

Gospel Bird, his first restaurant, closed in 2018 so that he could take care of his mother, who was diagnosed with cancer. Morris kept his second restaurant, Hull & High Water, open, because it was more profitable, he said. But, in 2019, Morris’ mother died, and Hull & High Water, never Morris’ passion project, languished and eventually closed.

But, then, he got a call from Coulter and toured the future spot of Faces, which was previously the burger-and-beer restaurant Stout. It was a small space, easy to handle and in Louisville, which Morris, a native, understands better than he ever did Southern Indiana.

Morris got to work on a concept, something healthier and less meat focused to set Faces apart from the greasy food that appeals to Bardstown Road bar hoppers. Morris found that Asian cuisine suited his preferences well, and he developed a menu with dumplings and khao soi (a coconut, curry dish), as well as some Western items like a shrimp cocktail with jumbo Patagonia shrimp.

Morris plans to be in the kitchen constantly, working 50-hour weeks.

“It’s made it way more exciting to say, okay now I can just finally for the first time in my life do something that I’m very, very passionate about,” he said.

But Morris’ past experiences make the fear of failure just as intense as his excitement.

“I’ve swung and missed twice, and I don’t want to do that again,” he said.