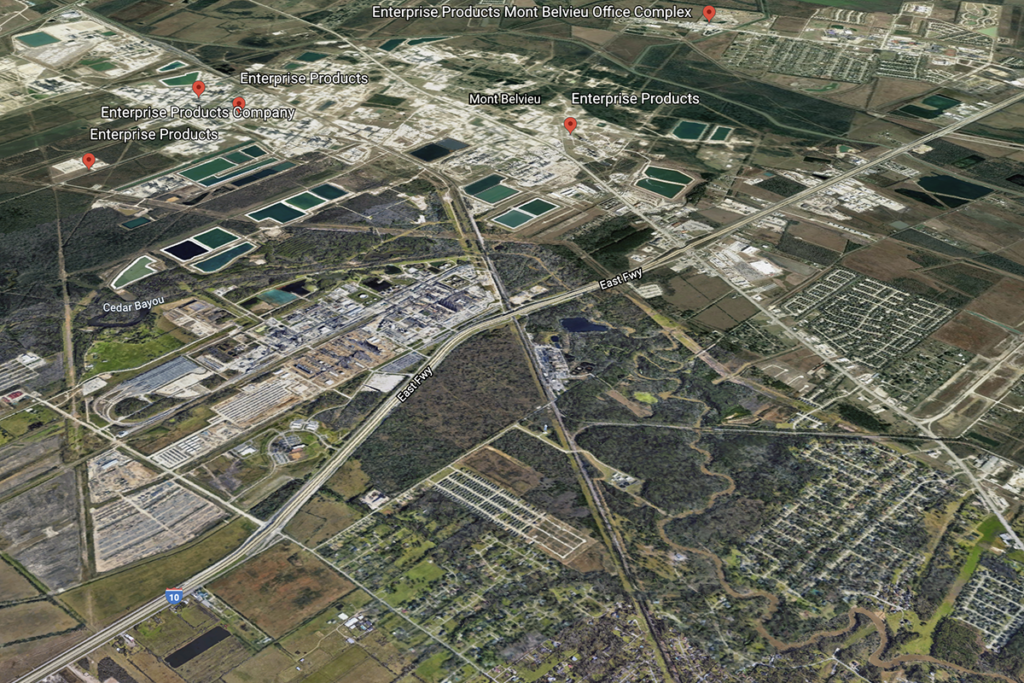 The Trump administration and industry leaders have pointed to a major petrochemical storage complex outside Houston as a model for the upper Ohio River Valley.

If only they could find a place like Mont Belvieu, Texas, where geological features allow for large-scale underground storage of the chemicals used to make plastic products, there could be an economic resurgence to follow the collapse of steel and coal. Tens of thousands of jobs would follow.

But if Mont Belvieu—a massive chemical distribution center for what has been a booming Gulf Coast plastics and petrochemical industry—has been a model for those promoting an Appalachian petrochemical renaissance, it also serves as a cautionary tale to those who would rather the Appalachian region reject a boom-or-bust fossil fuel future.

An examination of the chemical plants, pipelines and other gas handling equipment that sit atop the massive stores of natural gas liquids at Mont Belvieu reveals a history of fires, explosions, leaks, excess emissions, fines for air and water pollution violations, and an oversized carbon footprint. 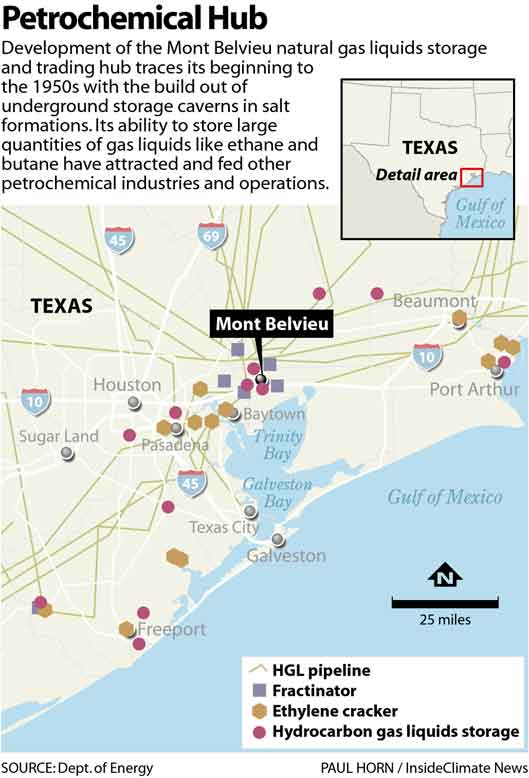 “We have the evidence that this is harmful, and Mont Belvieu is the prime example of that,” said Dustin White, project coordinator with the Ohio Valley Environmental Coalition, based in West Virginia. “The intention is to have a massive petrochemical buildout, and it’s outlandish they want to build it here, especially in an area that already has major health issues due to existing fossil fuel industries.”

A January report meant as a warning to Appalachia, by the Environmental Integrity Project, a Washington-based watchdog group founded by former EPA staff, found that the Mont Belvieu complex was marked by multiple explosions, fires, evacuations and fatalities throughout the 1980s and 1990s, and continues to be a major polluter. The largest Mont Belvieu operator is subject to ongoing federal and state enforcement actions, InsideClimate News found.

“Communities in Appalachia are at risk from a plan for an aggressive expansion of the petrochemical and plastics production industry, including construction of a massive new ethane storage hub,” the report concluded. “Area decision makers and residents need to consider the serious hazards that have arisen at a similar development complex in Mont Belvieu, Texas.”

Sen. Joe Manchin III (D-West Virginia), among the nation’s leading supporters of the coal industry and also a strong proponent of an Appalachian natural gas buildout, declined to comment on Mont Belvieu’s environmental difficulties but said he remains “committed to the development of the proposed Appalachian Storage Hub, particularly in this moment, for its economic development benefits for rural West Virginia, the greater Appalachian region, and our entire nation.”

Jobs created by ethane storage, he said, would be more necessary than ever as threats from the COVID-19 pandemic recede.

Central to the concept of a petrochemical buildout in the region is storage for the liquid byproducts of shale gas, like ethane. The idea is that if underground caverns are created for plastics precursors, plastics manufacturing will follow.

A three-state study in 2017 identified three areas along the Ohio River where caverns could be created in underground salt beds, limestone rock layers or abandoned gas fields.

Natural gas liquids, which include ethane, propane and butane, are valuable byproducts of fracking, but they are hard to move or store because they require either very low temperatures or high pressure to be in a liquid state. They can be stored above ground, but that can be dangerous.

Below-ground geologic formations are regarded as safer for storing natural gas liquids, but have their own environmental challenges, including preventing gases from migrating back to the surface. Leaks and explosions can also occur at pipelines, valves, tanks and processing plants that serve storage operations.

“The business of storing gases underground for use when needed is nothing new,” said Kristin Carter, a geologist with the Pennsylvania Bureau of Geological Survey who was the lead author and lead editor of the 2017 geological study. The practice in the Appalachian Basin “has gone on for nearly a hundred years,” she said. 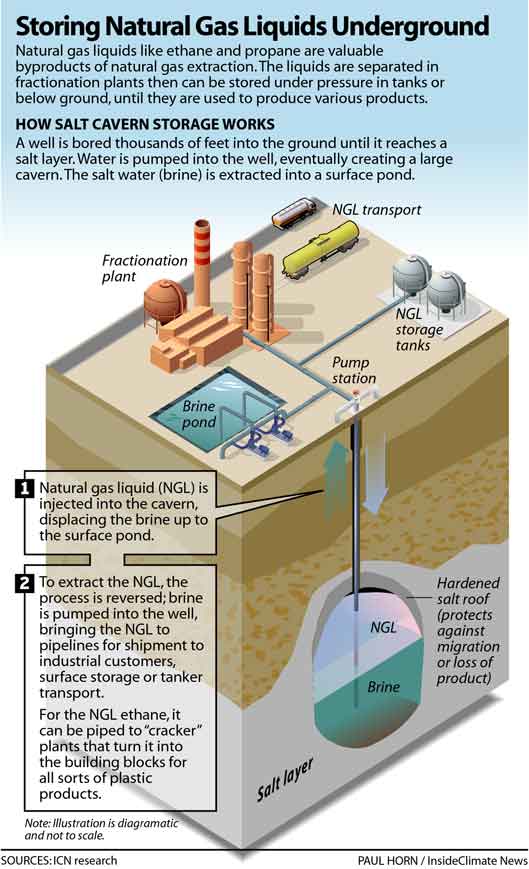 The first major facility in the envisioned petrochemical hub for the region is a multi-billion dollar plastics plant being built by Shell Polymers along the Ohio River, just 25 miles north of Pittsburgh. It is designed to “crack” ethane molecules into ethylene and polyethylene, components of many plastic products.

There are new serious doubts that this hub will materialize. A global backlash against plastics, anemic prices and an oversupply of polyethylene, a key plastics component, were all signs of troubling economic headwinds even before the coronavirus pandemic and Saudi-Russian tensions sent world oil prices tumbling, disrupting the petrochemicals industry.

Still, the Thai-South Korean partnership continues making moves that suggest their plant may be financed. The companies announced March 25 they had struck a deal to make payments to Belmont County local government and schools in exchange for property tax relief. A spokesman said a final investment decision would be made by summer.

No ground has been broken for an underground storage facility for ethane or other natural gas liquids.

The Appalachian Development Group in West Virginia announced last year that it had been invited to submit a second phase application for $1.9 billion in Department of Energy loan guarantees for a project called the Appalachian Storage and Trading Hub. The money would come from a fund that primarily has been used to back wind power, solar and other types of clean energy.

Steven Hedrick, the chief executive officer of the Appalachian Development Group, said late last month that he was still working to complete that application. A company spokesman declined to answer further questions about a project that remains something of a mystery, with no identified location and no information available about its size or scope.

Industry publications and news reports have said it could cost as much as $10 billion and hold 10 million barrels of liquid ethane.

The other active storage proposal has been from Mountaineer NGL Storage, which has been studying a site along the Ohio River in Monroe County, one county south of where the proposed Thai-South Korean plant would be located. Mountaineer NGL Storage would be smaller—designed to hold about 3 million barrels—but it is farther along in the development process. 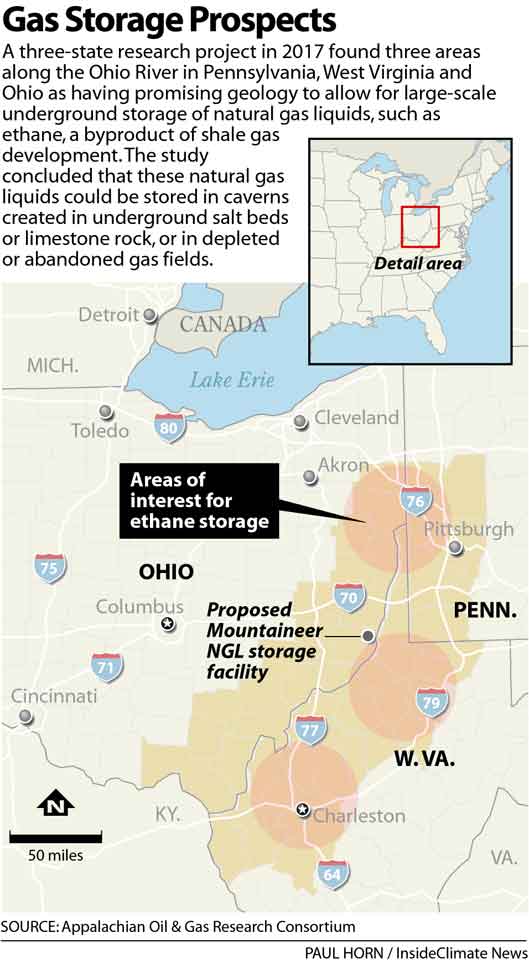 Tom Sanzillo, director of finance at the Institute for Energy Economics and Financial Analysis, an environmental think tank, sees the Ohio cracker plant and the Mountaineer storage project as linked, because of their proximity. He said that if the plant isn’t funded, there wouldn’t be a need for Mountaineer.

David Hooker, president of Mountaineer NGL Storage, acknowledged that he sees both the Shell plant north of Pittsburgh, and the proposed Thai-South Korean plant in Ohio as potential customers, but he said they are not essential for his business plan.

He said he expects to obtain the permits he needs to start creating the first of three underground caverns this summer. The process involves injecting water to dissolve part of the salt bed 6,500 feet below the surface.

Hooker called Hedrick’s competing proposal for underground ethane storage “pie in the sky,” saying it’s too large for the needs of the region. Hooker also said he has no plans to turn his project into anything like the Mont Belvieu complex, with its long history of mishaps and environmental violations.

“We just want to be a warehouse,” he said.

Environmental Calamities Have Been a Fact of Life

The sprawling petrochemical complex in Mont Belvieu, about 30 miles northeast of Houston, owes its existence to the salt domes that lie beneath it. For decades, companies there have created underground caverns in the salt to store hydrocarbons.

The U.S. Department of Energy calls Mont Belvieu the largest underground storage area in the world for natural gas liquids.

Houston-based Enterprise Products Partners has dozens of caverns and multiple related chemical plants there that separate various natural gas liquids for their use in the petrochemical industry.

There are also other companies operating nearby, including ExxonMobil, Phillips 66, Targa Resources and Lone Star NGL, according to the West Chambers County Chamber of Commerce.

The Trump administration and industry backers believe a similar concentration of storage and production facilities could turn the Ohio River Valley into the “second center of U.S. petrochemical and plastic resin manufacturing, similar to the Gulf Coast,” as the American Chemistry Council said in 2017.

But environmental calamities have been a fact of life in Mont Belvieu for decades, and Enterprise Products, the complex’s largest operator, continues to be the subject of numerous enforcement actions. A spokesman declined comment on any aspect of its operations.

A Fortune 500 company with assets that include 50,000 miles of pipelines and reported combined revenues of $36.5 billion in 2018, Enterprise Products maintains 129.8 million barrels of storage capacity for natural gas liquids in Mont Belvieu.

Its operations emitted the equivalent of 1.3 million metric tons of carbon dioxide in 2018 alone, according to the U.S. Environmental Protection Agency.

That’s as much as 281,000 typical passenger vehicles annually. For eight years through 2018, the company’s Mont Belieu complex reported that it had released the equivalent of 10 million metric tons of carbon dioxide.

In 2018, Enterprise’s Mont Belvieu complex led all Texas industrial operations in the amount of nitrogen oxides it released during unauthorized air pollution events, according to a December 2019 report from Environment Texas, an environmental group. Nitrogen oxides contribute to soot, smog and acid rain, and can aggravate respiratory diseases, particularly asthma, according to the EPA.

EPA’s website also identifies the complex as a high-priority violator that has been out of compliance with the Clean Air Act for at least the last three years and the Clean Water Act for nearly three years; regulators have assessed the company with over $1 million in state and federal fines during the last five years.

Records from the Texas Commission on Environmental Quality and the EPA show enforcement actions were taken by regulators for alleged violations that included unauthorized air emissions for weeks and months at a time, exceeding effluent limits in water wastes, and failing to follow chemical risk management rules aimed at limiting dangerous releases, fires or explosions.

The Texas commission is in settlement talks with the company over alleged air permit violations, said Andrew Keese, commission spokesman.

Much is at Stake in the 2020 Presidential Election

With the nation’s employers shedding millions of jobs during the partial shutdown of the U.S. economy set off by the coronavirus, causing oil and gas prices to plummet, the future of Appalachian shale gas and petrochemicals remains uncertain.

Analysts with the Institute for Energy Economics and Financial Analysis have found that eight of Appalachia’s largest fracking companies collectively spent $73.4 billion more on drilling and other capital expenses than they made by selling natural gas during the last decade.

But whether Appalachia becomes a petrochemical hub or not, experts say that fracking in the Marcellus and Utica shale and its environmental and health concerns will likely remain a fact of life for some time.

Much is at stake in this year’s election. The Trump administration has already made its fossil fuel-fed vision clear. But Democrats in Congress are pushing legislation that would place a three-year moratorium on any new plastics manufacturing.

Former Vice President Joe Biden’s relationship with fracking has been muddled. The presumptive Democratic Party nominee was part of the Obama administration’s “all-of-the-above” philosophy, which allowed the Appalachian fracking boom, and he’s been trying to win over blue collar voters in highly competitive states like Pennsylvania and Ohio who went for Trump in 2016.

But a Biden win would nevertheless mark a stark departure from Trump’s climate change denialism, and would likely be a moderating influence on an Appalchian fossil fuel future. Unlike Trump, Biden has embraced clean energy and the jobs that would come with it, as described in the Green New Deal. He wants the United States to achieve net-zero carbon emissions no later than 2050.

“Climate change poses an existential threat to our future,” Biden tweeted on Jan. 27, “and we are running out of time to address it.”