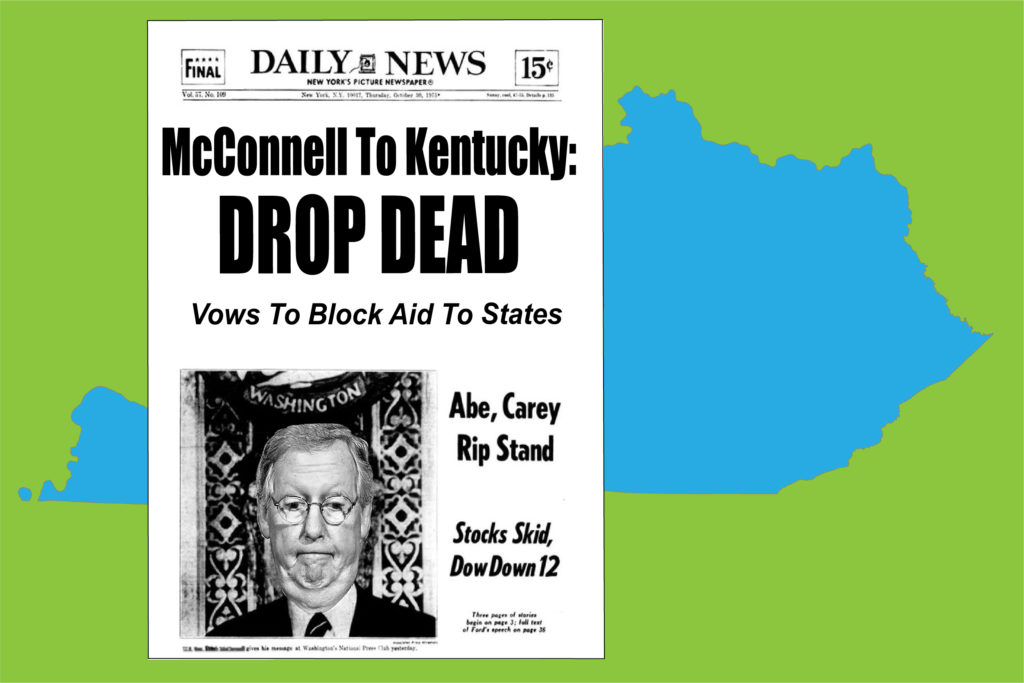 You’d have to be stupid to tell your home state in an election year that it can drop dead.

That is essentially what U.S. Sen. Mitch McConnell has done.

He told conservative radio talk show bloviator and user, the notoriously loopy Hugh Hewitt, that he would rather force Kentucky and other states to declare bankruptcy than help them out with federal dollars. He would rather they default than preserve services and prevent even more public employee layoffs and furloughs.

“Yeah, I would certainly be in favor of allowing states to use the bankruptcy route. It saves some cities. And there’s no good reason for it not to be available. My guess is their first choice would be for the federal government to borrow money from future generations to send it down to them now so they don’t have to do that. That’s not something I’m going to be in favor of,” he said.

Sure, it may be OK for Ruth’s Chris Steakhouse to get a $20 million bailout (which it says it will pay back), and also the 71 publicly traded companies that received $300 million of emergency payroll loans, Forbes reported.

But you and your whiny state?

Off to bankruptcy court, you freeloaders!

To understand how bad declaring bankruptcy would be, consider that the last state to do so (forced to restructure its debt), was Arkansas during the Great Depression.

Ford didn’t actually use those words, as McConnell did not either, but the intent was clear.

Ford said: “What I cannot understand—and what nobody should condone—is the blatant attempt in some quarters to frighten the American people and their representatives in Congress into panicky support of patently bad policy. The people of this country will not be stampeded; they will not panic when a few desperate New York City officials and bankers try to scare New York’s mortgage payments out of them.”

Similarly, McConnell is blaming the states for their financial peril, not a virus that has shut down the world’s economy: “You know, we’ll certainly insist that anything we’d borrow to send down to the states is not spent on solving problems that they created for themselves over the years with their pension programs.”

We think he may need new glasses.

Certainly, Kentucky Democrats (largely) and Republicans were complicit in causing and not solving the state’s public pensions problems.

Is this really about pensions? Republicans notoriously hate unions, public or otherwise, and an actual bankruptcy would help bust them

But maybe it is just about politics.

His office released a statement that described any help as “Blue State Bailouts.”

U.S. Rep. John Yarmuth, founder of LEO, accused McConnell of provoking “a war against the states.”

“The greatest internal crisis our country has ever known was a war between the states. Now, it seems, Senator McConnell intends to rival that with a war against the states. The deeply cynical suggestion that we let states go bankrupt is hardly an assault on blue states alone, as McConnell would have us believe. Make no mistake, this is an attack on Kentucky and Kentuckians by our own senior senator.

“Bankruptcy would have devastating consequences on the very people we’ve asked to fight on the front lines of this crisis — police, firefighters, public health workers. And it doesn’t stop there. Every Kentuckian would quickly notice that local governments would not have funds to police the streets, pick up garbage, or respond to emergencies. Pensions would be slashed, if not eliminated for government employees, including public school teachers. Pensions they depend on, pensions they’ve earned,” he said in a statement.

On Wednesday when asked about McConnell’s threat, the typically measured and restrained Gov. Andy said:

“I will say every state in the country is going to be in desperate need of federal aid. If the federal government does not provide that aid, it will further exacerbate the recession that we are in. It will make restarting the economy that much more difficult. It will create additional hardships. And we are looking at where our budget is right now, and we absolutely need that help. Otherwise, the current fiscal year is going to be a real problem. Now, I have a little bit of experience in this public bankruptcy model. I will say that getting in that position can potentially give a federal judge the ability to order you to raise taxes. And I do not want to be in that situation whatsoever. I mean, we ought to be working with the federal government with the stimulus they are providing to make sure we can continue to operate state government, not deepen any economic hardships that we are facing and have the ability to help restart our economy in a number of different ways.”

How would McConnell explain new taxes to Kentucky as he asked for their votes?

The less-filtered and rougher but equally dreamy version of Gov. Andy, New York Gov. Andrew Cuomo ranked McConnell’s bankruptcy strategy as “one of the really dumb ideas of all time.”

(He also noted that McConnell’s Kentucky gets more federal money for services than it contributes, while New York contributes more. “It’s your state that is living on the money that we generate,” Cuomo said. “Your state is getting bailed out. Not my state.” Here is how the New York Daily News called the contradiction.)

The impact of the shutdown is already evident in Kentucky and Louisville.

UK has announced furloughs and a hiring freeze.

When Louisville Mayor Greg presents his budget to the Metro Council today, expect him to predict severe cuts.

Remember last year when we all worried about pools and libraries closing? Oh, those halcyon days. This year’s budget, without any federal assistance, will make those cutbacks look like couch change.

The city already has furloughed 380 employees.

“Probably the most significant variable in what our budget situation looks like is the degree of aid and flexibility we receive from the federal government,” Fischer said in a statement. “That’s why I’ve joined mayors across the country who are adamantly urging for Congress to give cities flexibility in how we spend those dollars, plus provide additional direct funding to address our shortfalls.”

Not happening, said McConnell, who told Hewitt the Democrats be damned for wanting to help the states and cities: “They wanted to extract other things. Fortunately, what they wanted to extract the most, I refused to go along with, and the White House backed me up, and that was we’re not ready to just send a blank check down to states and local governments to spend any way they choose to.”

Predictably and understandably, governors and Democrats have been beating McConnell rhetorically like a piñata filled with votes.

“Look at the language of Mitch McConnell: ‘I’m not bailing out blue states, they should go bankrupt,’” Pelosi told The Washington Post. “Really? Really? How insecure is he in his own race in Kentucky to have to resort to that pathetic language?”

How insecure? Or, how secure? You’d have to be secure in your re-election chances to tell your state to drop dead, wouldn’t you?

Maybe we should look to history for an answer to what McConnell can expect in November (if there are elections at all).

“Ironically, Ford’s tough words, and the even tougher headline they engendered, may have served to save New York and sink Ford.”

“And although Ford would later approve federal support for New York, New Yorkers remembered the headline. The following year, Jimmy Carter received the third-highest vote share a Democratic presidential candidate ever received in New York City, narrowly won New York State, and with it, the forty-one electoral votes that give him the Presidency — revealing the impact from one speech that wasn’t given, and one that was.”

Of course, Carter’s victory over rebound President Ford also came as a reaction to the corrupt, impeachable and criminal Nixon administration.

One can only hope Kentuckians remember the time McConnell told them to drop dead.