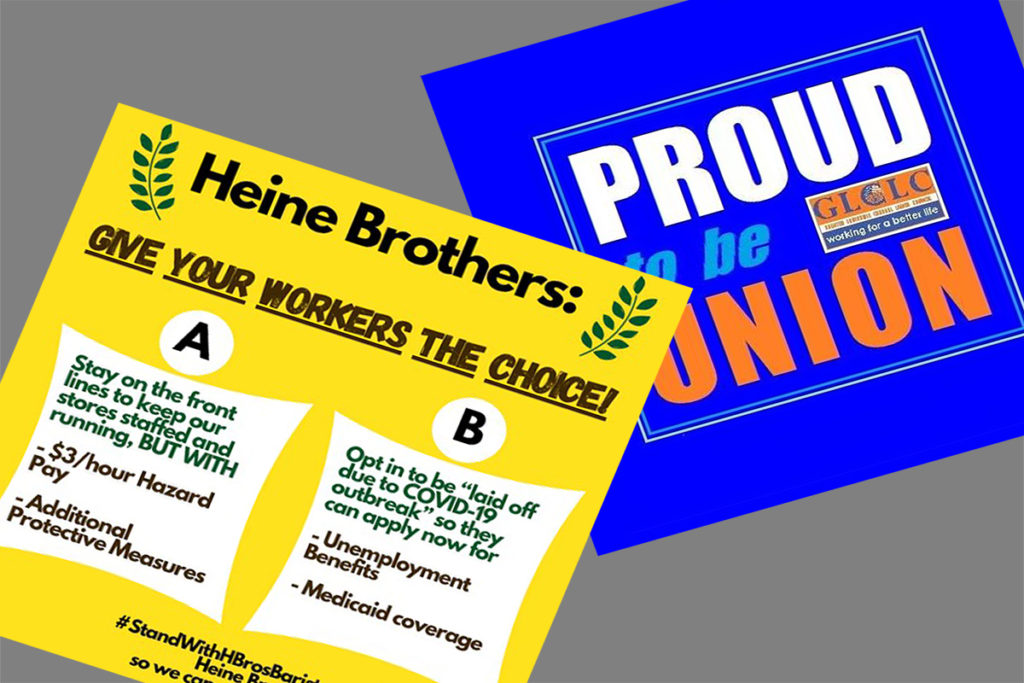 There are few restaurant unions in the U.S. and none in Louisville, but some Heine Brothers’ Coffee employees organized a sickout last Friday to demand more protections against coronavirus.

Hannah Jones, a barista, said that she and at least 35 employees who signed a demand letter to leadership either didn’t work that day or called in sick, although all but one location remained open for the day.

“We’re really just trying to be reasonable about how we can get through this solely, healthfully, as the people who operate this company,” she said.

A week after the sickout, Heine Brothers’ told employees that they would receive $3 more per hour as a “COVID-19 bonus” for eight weeks starting Monday as a result of help from Congress’ CARES Act. This was in addition to extra safety precautions that were previously announced.

The coronavirus pandemic has been giving unions and nonunion workers new currency, as the country’s understanding of frontline, or essential, workers is recalibrating.

In addition to the job action taken by employees at Heine Brothers’, factory workers and union members at GE Appliances in Louisville threatened a strike last week out of concerns for their safety.

Frontline workers across the United States are taking similar actions. Suddenly, the ranks of essential employees include not only nurses and sanitation workers but those who work in grocery stores, restaurants and factories. And while now they’re receiving praise for continuing to work, these lower-wage workers also are more at risk of contracting COVID-19. As in the case of the coffee shop workers, some feel as if their employers aren’t taking the extra steps necessary to protect them from the virus.

As a solution, some of them, those in labor unions and those who are not, have started organizing to enact change.

Last week, Whole Foods employees decided not to show up to work in protest, although the company said that none of its stores closed. Instacart workers also went on strike.

“Nonunion workers are seeing what union members have known for years, which is that if you want to make improvements in your workplace, if you want to secure protections, doing so collectively is the only effective way to do it. One individual worker is not going to be able to make demands to a boss in the same way that workers standing together can,” said Richard Becker, who is a writer and staff organizer at 32BJ SEIU. (He said that for his interview with LEO, his remarks were not made on behalf of his union.)

And workers are seeing wins.

On April 7, GE Appliances agreed to grant IUE-CWA Local 83761 union members $2 extra an hour for working, or they could leave and collect unemployment benefits if they didn’t want to work because of safety concerns.

Union President Dean “Dino” Driskell said the lesson is: “If we work together and we work as one then we’re going to get a lot further than we are as individuals at a workplace.”

In Chicago, members of a union for Jewel-Osco grocery stores also received an additional $2 per hour in hazard pay. And Instacart is now providing its nonunion workers with health and safety kits that contain hand sanitizer and masks.

In addition to its COVID-19 bonus, Heine Brothers’ installed clear plastic protection at its drive-throughs for employees, and Jones told LEO that management informed workers that they would provide cloth masks to employees.

The barista sickout did not close down any Heine Brothers’ locations that were already open, but a location that was supposed to open back up that day, on Veterans Parkway in Jeffersonville where a worker tested positive for COVID-19, did not.

Heine Brothers’ CEO Mike Mays declined an interview with LEO but said in a statement: “There is no road map for the current situation. We are just trying our best to simultaneously balance three equally important goals: 1) do our best to keep our employees and our customers safe, 2) keep as many people employed as we can, and 3) keep our company in business. I founded this company 25 years ago with a commitment to being about more than just profit, and we have, and will continue to, walk that talk.”

Heine Brothers’ baristas did not receive all protections they demanded, including conversion to a touchless pay system and a halt on all new sales promotions. They also asked that the company lay them off if they felt unsafe working, so that they could seek unemployment benefits.

Jones said she hopes that the coronavirus pandemic has forced the country to realize who its essential workers really are: those employed in healthcare, logistics, targeted manufacturing and at grocery stores and even restaurants.

“I think that it would be really, really shortsighted and ultimately inhumane to go back to a situation where we undervalue so significantly many of those workers and many of those services,” she said.

“Let’s hope that once we get through this, that recognition continues among the people who make policy, the people in Washington and in statehouses and city hall, and that we do what we need to do to not just call them heroes but to pay them like they are and to give them the paid sick leave and the child care and healthcare as a right that they should be getting,” said Gilpin, author of “The Long Deep Grudge: A Story of Big Capital, Radical Labor, and Class War in the American Heartland,” a book about the union at Louisville’s International Harvester.

Becker warned that any gains secured by employees to improve their working life during the coronavirus might be short-lived unless they continue to organize. And, the best way to ensure continual improvements is through a union of some sort.

For independent restaurants and small businesses such as Heine Brothers’ that operate on small profit margins, a union may seem off the table. But, Gilpin says that unions don’t focus just on extracting more pay for their members.

“What a union provides, even in a smaller workplace like that, is the ability for those workers to talk collectively to management, the owner of the establishment, and come to a collective understanding about how the work should proceed, what workers need to keep themselves feeling safe, what management can do to help ensure that,” she said.

And Becker said he believes some union-like models could work for the restaurant industry, such as a guild modeled after the unions for electrical and building and construction trade workers. Those unions train their members, put them in a pool for jobs and have relationships with local employers.

“The reality is that a worker is a worker is a worker,” he said. “If you have a boss, if you don’t call shots, if you don’t own the building, you’re a worker. And I think workers, whether you’re GE, or Amazon or Heine Brothers’ or what have you, need a union, whatever form that takes. Because that’s the only way to guarantee longterm durable gains and improvements for workers.”