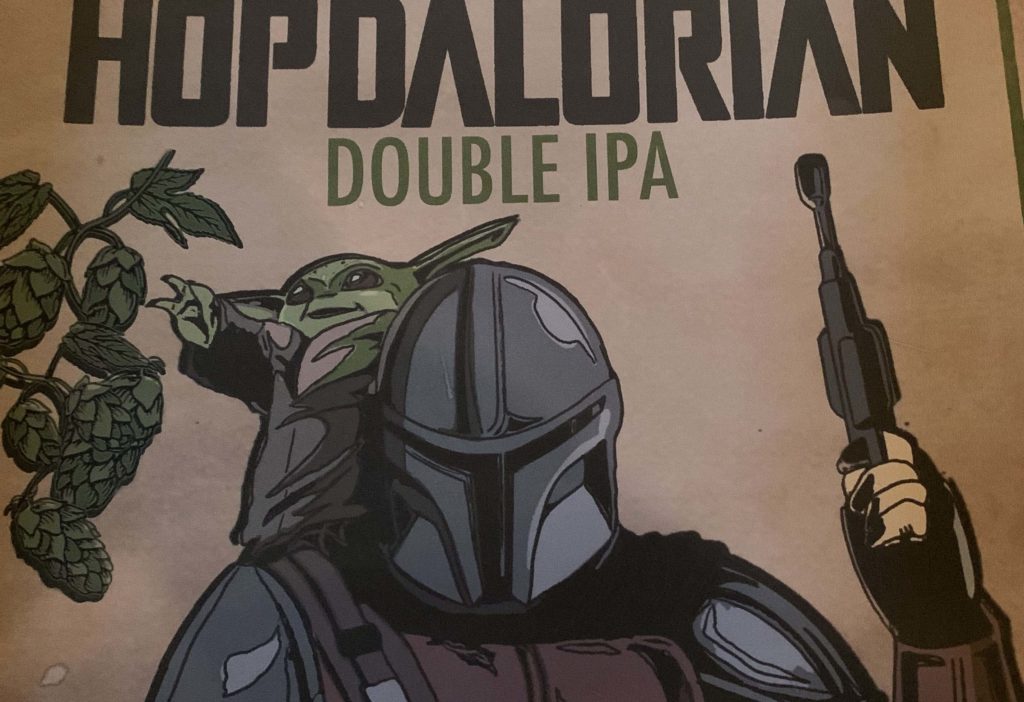 Like any well-bred person, we’d never deign to judge a book by its cover. But we’d sure as hell buy a beer due to its clever name or can art. With hundreds of thousands of beers listed on Untappd, coming up with unique names is becoming harder and harder for brewers. Yet, it’s important. “Sometimes all you are is a name on a chalkboard,” explained Against the Grain (AtG) Brewery co-founder and head brewer Jerry Gnagy. “If patrons can’t see your artwork or don’t know your brewery’s reputation, a clever name may be the only way to make your beer stand out on the tap list.” Of course, as AtG knows better than anyone, being edgy can also hurt if your names cross the line into offensive. (I mean, some may find names such as The Brown Note, Meconium Falcon or Bloody Show downright revolting. Prudes!)

So, where do brewers and owners look for inspiration to come up with names that attract attention and resonate with drinkers, while avoiding land mines like trademark infringement and plain ol’ crassness? We asked!

Gravely rocks the beer name game by tapping into the vast world of music. Sometimes beers are named for a specific song, like La Bamba lager, Thunderstruck IPA or Dancing in the Dark dunkelweizen. Other times, beer names are a nod to musical terms, such as Power Chord IPA or Pinky and Pointer pale ale (if you don’t get this reference, make a fist, stick your pinky and pointer finger out and yell: “Rock on!”). Brewer Nick Felton said that Gravely tries to play it safe when choosing names as it is a pain to change a beer name after it is released.

For example, Gravely’s Cowboy Dan Blonde was originally called John Cougar. Gravely proactively reached out to Country Boy Brewing to make sure it didn’t think the name was too similar to its Cougar Bait. Country Boy green-lighted the name, but Rhinegeist Brewery felt it tread on the paws of its Cougar beer and asked them to change it.

Probably the biggest challenge for the Gravely brewing team is fighting the urge to name beers after their favorite obscure punk songs in favor of those that will be more recognizable to customers. Names that click with customers drive business. For example, all of Gravely’s Northeast IPAs are named for the Pixies, and Gravely saw an uptick in sales the night the band played at the Yum Center in March 2019.

Founder Brian Hampton was equal parts ecstatic and mortified to get a call from the Monty Python organization politely asking him to edit some imagery he’d “borrowed” from “Monty Python and the Holy Grail” for a beer poster. “They were super nice about it. They know we’re big fans,” Hampton said. Monty Python references abound at Floyd County, which aligns nicely with the medieval theme of the taproom. However, as Floyd County expands, so does the field from which it can draw beer names. We enjoyed the Hopdalorian IPA and the Albus Dunkelmore dunkelweizen, both because they pay homage to our favorite household franchises and because the beers were damn good.

“Mainly, we’re going for the chuckle,” said Hampton. “Because we’ve made a business decision not to distribute our beers we don’t have to worry about label approvals or registering beers nationally. We just try to be respectful, not insulting or offensive, and not come too close to anything else we see on Untappd.”

Traditionally less concerned about being insulting or offensive are those lovable envelope-pushers at AtG. “My favorite source of names is making fun of other breweries, beers or industry trends,” said Gnagy. As the saying goes, insult is the highest form of flattery. Wait. Is that right? There’s no doubt AtG’s edgy approach in both beer names and can art has worked well for it, as is evidenced by its loyal fan base and global distribution. However, it has also had to deal with “cease and desist” orders from entities including other breweries and the Randy Savage estate (the latter resulted in a beer name change from “Poffo Pils” to “Retitled Pils,” which is clever in its own right).

But even AtG might be “growing up” a little (although Gnagy looks pained to admit it). “The line between clever and crass is blurry, and we’re trying to stay on the clever side. We have a Bock beer coming out, and we’re naming it New Kids on the Bock. Trust us, there are other things that rhyme with Bock that we could have gone with … ” Well played, AtG! Other winning pop-culture-reference beer names from AtG include Bretty White and Marty McFly P.A.

Names aren’t only important when it comes to beer, but also to breweries. “No one wanted to tell us our baby was ugly,” said co-founder John Flodder. The group had received some pushback on the name because it was causing confusion among future patrons and supporters. “We still wholeheartedly believe in the ethos around the original name: do good, love big, live now.”

However, when the leadership team stepped back to examine whom they really want to be, it’s a hyper-local brewery that brings people together via beer, food and community space.

And that will happen at 1020 E. Washington St. (thus the name Ten20). “Everything will radiate from that spot,” said Flodder. “We’re first going to work on being good neighbors to the people on our street, then to Butchertown, then to surrounding neighborhoods, etc.” They are also focused on being a good neighbor to the Coopers (the official LouCity fan club), who will march from Ten20 to the new soccer stadium for the first match on April 7. •