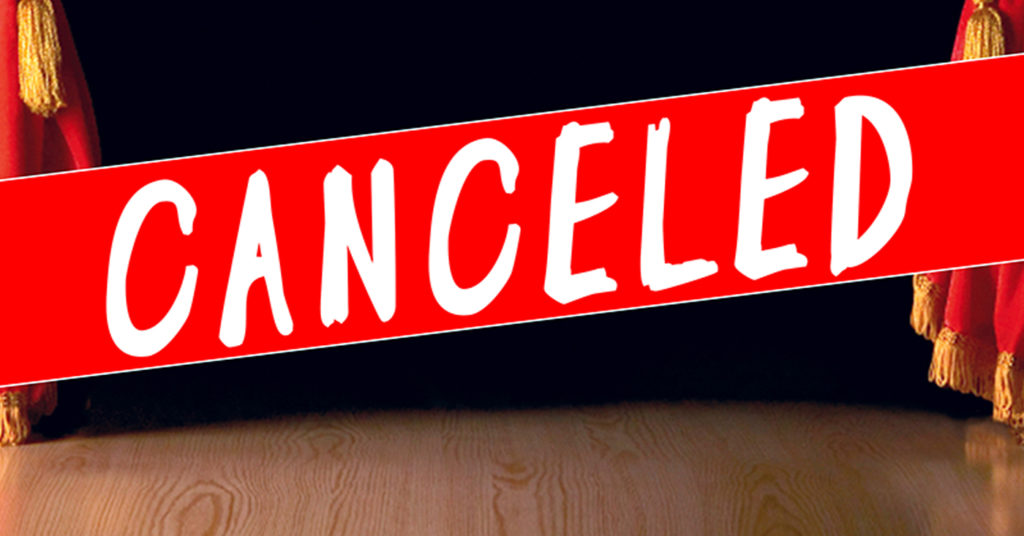 The world of theater is full of superstitions and dramatic turns of phrase. We call our days off “dark days.”

In Louisville, theater company after theater company has announced that they are either canceling or postponing their shows due to the coronavirus outbreak. Some are trying to use digital streaming and are working to raise money to help until the crisis ends, but organizations and actors in Louisville are already feeling the impact.

The 2020 Humana Festival of New American Plays is over. Only two of the five world premieres — “Nicole Clark is Having a Baby” and “Are You There?” — opened. “Are You There?” only had one performance. “Where the Mountain Meets the Sea” had one preview performance, but hasn’t actually opened. “Grace” and “FLEX” will not be seen at all.

Actors Theatre’s Artistic Producer Emily Tarquin told me about what it has been like at Actors, an intense mix of emotion. “I have witnessed a lot of problem solving through tears and simultaneous grieving and celebration in the past few days,” Tarquin said. “We are sad, we are scared, we are hopeful, and we are experiencing all of it together.”

Performances in the Henry Clay Theatre are canceled, including the end of Pandora Productions run of “La Cage aux Folles” and Bunbury Theatre’s upcoming production of “Imagining Heschel.”

Acting Against Cancer has delayed all the deaths we might have seen in their production of “Murder Ballad.” The Louisville Ballet has postponed its season and its annual fundraising event Raise the Barre.

The impact is already taking a toll across the entire theater community, financially and emotionally on organizations and on individual actors. Many actors — to use another dramatic turn of phrase — aren’t getting a chance to “say good bye” to the characters they have worked so hard to bring to life.

Jason Cooper was playing Georges, a starring role in “La Cage aux Folles,” when Pandora Productions’ show closed early. “And you don’t realize, ‘Oh I’m never going to do it again,’ that was the last time, and I didn’t know,” Cooper said.

Alison Huff,  managing director at Commonwealth Theatre Center (CTC) said postponing its production of “A Streetcar Named Desire” was difficult to do. “There have been lots of tears followed quickly with ‘but it’s the right thing,’” Huff said.

Many of Louisville’s actors teach acting for a variety of organizations including CTC, which has suspended all classes. I teach after-school classes for Looking for Lilith. Shannon Woolley Allison, co-artistic director of Looking for Lilith Theatre, spoke about the financial burden on artists.

“We have numerous teaching artists that are missing work,” said Woolley Allison. “Yes, theoretically, we can make this class up after the health concern is past, but these are artists that are expecting money  in March, and saying, ‘Well, you’ll get it in May,’ is not particularly useful.’”

Lilith was set to open “Good Grief” on Thursday, March 19. It is one of many groups already planning to go digital and stream their work. “Thursday, which would have been opening night, we’re going to stream a nice, edited version of one of our original plays from the past. We decided, let’s put something out there,” said Woolley Allison.

Multiple arts organizations are working to find ways to create and stream content from our local artists, and brainstorming ways to help raise money for artists in need. Louisville Arts & Culture Alliance and Fund for The Arts are working to create a way for all of the bigger arts organizations to work together to stream content to their audiences.

Digital solutions are also being used by UofL’s theater program. It is facing the same “teach-from-home” edict as the rest of UofL. Assistant Professor Ari Calvano is teaching movement and yoga through a computer.

“We’re doing it via Zoom, because that’s how I can see them moving,” said Calvano. “The first day is going to be focused on placing the computer in a way that I can see their whole body and hope for the best.”

CTC’s Huff summed up the huge effect this crisis will have on all the larger arts groups. “The long term hits to contributed income are going to be devastating to many arts orgs — big market hits means foundations and major gift donors will have way less money available to give away at precisely a time when nonprofit organizations need it most.”

Cooper is also artistic director and founder of Chicken Coop Theatre. He refuses to see the delay of “Grey Gardens” as a defeat. “We will reschedule, it will happen at some point,” Cooper said. “I don’t know any details, but it will happen.”

Woolley Allison also offered hope, an example of how crisis can pull people together: “Last night, we put up on social media what [money] we would need to cover these couple of weeks for teaching artists, and I think we’ve already raised that money, in less than 24 hours.”

Despite a dire analysis, Huff also had some hopeful words. “No group is better at the show-must-go-on spirit than theater artists,” Huff said. “Tough times are ahead, but we’re resilient.”

There are many unplanned “dark days” ahead. But in the theater world, we don’t actually ever leave the stage completely dark. Superstition dictates that one light is always left on — the “ghost light” — to keep the ghosts company while we’re gone.

Actor and teacher Brian Hinds said it’s more than just superstition. “I consider theaters to be the most sacred spaces on the planet,” Hinds said. “Theater tells the stories of being human, what it is like to be human. And the ghost light reminds us that people were here before us telling stories. And people will be coming back to tell more stories.” •