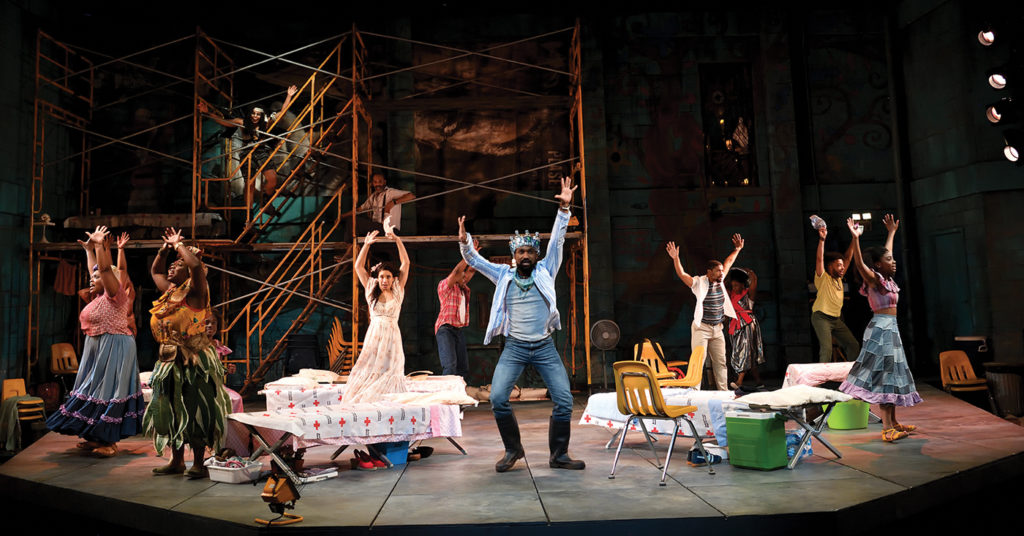 The cast of 'Once On This Island.' | Photo by Jonathan Roberts.

It’s a rare treat when Actors Theatre of Louisville puts on a large-scale musical production, especially a Tony and Olivier awards-winning musical such as “Once on This Island.” First performed at Cincinnati Playhouse in the Park in September, this particular co-production, directed and choreographed by Actors’ executive artistic director, Robert Barry Fleming, has been heralded since the beginning of the 2019-20 season.

Needless to say, there’s a lot of hype to live up to.

Through the scenic design of Jason Ardizzone-West, the Pamela Brown Auditorium was transformed into a storm shelter, with beds covered in Red Cross sheets, a couple standing fans and coolers spread across the stage. They used one of my favorite recent theater trends, bringing the cast out gradually before the start of the show, allowing them to interact naturally with the set: reading magazines, doing pushups, playing with dolls and so on. Even the pre-show announcement played into the scene, referring to the theater as a shelter and telling the audience to turn off their phone for safety reasons due to the storm.

And it’s not just a way of immersing the audience. The set shines a light on the devastating effect of hurricanes in the French Antilles and throughout much of the world. Actors even partnered with WaterStep, a Louisville-based nonprofit dedicated to helping provide communities all over the world with clean drinking water, and the lobby outside the theater was filled with displays and information on the clean water crisis.

But the storm is not the story of “Once on This Island,” and the story itself is the best part of the show. It’s told like a bedtime story or a fairy tale, partly because that’s how the heroine, Ti Moune (Lauren Chanel) sees her life, and partly because of the storytelling nature of the culture. The audience is told of a beautiful island ruled by four gods: Asaka (Bre Jackson), the earth; Agwé (Allan K. Washington, decked out in a crown of water bottles), the water; Erzulie (Gisela Adisa), love; and Papa Ge (Soara-Joye Ross), death. We’re told of two different worlds that reside on that island: the villages with the hardworking, dark-skinned peasants and the cities with the wealthy, light-skinned grand hommes. Best of all, we’re told of our heroine, Ti Moune, an orphan saved from a storm by the gods, which led her to believe that they must have a special plan for her.

The idea of two different worlds might first bring to mind “Romeo and Juliet.” But think closer to Hans Christian Andersen’s “The Little Mermaid” (not the nice Disney version). There’s even that chilling ultimatum and self-sacrifice consistent with the classic tale: Ti Moune bargains with Papa Ge to trade her life for that of the stranger she’s fallen in love with, Daniel (Colin D. Carswell); when Daniel inevitably weds another, Papa Ge returns to offer Ti Moune a knife. If she kills Daniel, she can be free of the deal.

The choice is a morbid and tragic one, but the songs in which the deal is struck (“Forever Yours”) and in which Papa Ge comes back to collect (“Promises”) are some of the best in the show. Ross has a terrifying charisma and, even in scenes when she wasn’t at the center stage, I found myself watching her reactions. But Chanel’s sweet, loving Ti Moune matched the god of death when it comes to determination and stage presence. In fact, as adorable and naive Ti Moune might be, there’s no stopping her once she sets her mind to something, which is what makes her a sometimes frustrating but overall satisfying heroine.

It’s clear from the appearance of Daniel that the romance is mostly in Ti Moune’s mind. She falls in love with Daniel while in an exhausted fever as she works to keep him alive. He’s not even conscious, and they’ve never once spoken at the time that Ti Moune declares him to be “forever hers.”

That Daniel, once he meets her properly, does fall in love (or something like it) with Ti Moune almost makes him more of a cad. He feels for her, but ultimately still sees himself as better than her and ultimately betrays her. That Ti Moune seems so young and that Daniel seems to take advantage of that does not make their love much more compelling. But ultimately, the story isn’t really about Daniel, it’s about Ti Moune and the kind of person she is — the kind who can make the gods hear her.

And it’s about hope, as well, as the meta finale “We Tell the Story” reminds the audience. It’s about the hope and love that can come out of tragic situations, as well as the way we create narratives and tell stories in order to make sense out of tragedy and keep hope alive.

The effects toward the end are also visually stunning, with a downpour of rain actually falling onto the stage and the center stage flooding with water as Ti Moune walks through. Props have to be given to production stage manager Stephen Horton and his team along with Ardizzone-West’s scenic design for pulling this off so seamlessly.

As the story is recounted to another peasant girl (Cadence Diggs) back in the village, we’re told that the gods made Ti Moune into a tree that forever kept the gates of the Hotel Beauxhomme open and watched over both peasant children and grand homme children, including a son of Daniel’s and another peasant girl. We’re never told what their story was, but it’s nice to think that they broke the cycle of past generations and that Ti Moune’s story brought the two disparate worlds a little closer together. •

‘Once on This Island’
Through Feb. 23
Actors Theatre of Louisville
316 W. Main St.
actorstheatre.org
Prices and times vary