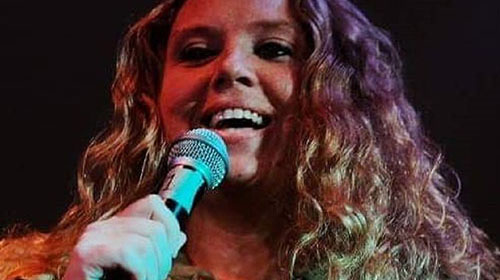 Every comedian has a nightmare-gig story to tell. Melissa Doran ends her story about appearing at a swingers’ resort with: “I was like, ‘No way, this is definitely breaking some kind of health code violation.’” Read the rest of the story below, and see her and Louisville comedian Mandee McKelvey at the Galentine’s Day Comedy Show + Waffle Dinner on Thursday.

LEO: You’re based out of Louisville, but you’re originally from New Jersey.
Melissa Doran: Yes, I’m a Jersey girl, for sure. I’ve been in Louisville almost 20 years. My kids are there [in Louisville]. It’s the first place I ever got paid to do comedy, so it’s like a second home to me.

What adjustments did you make?
I think being a woman. It seems more conservative there [in Louisville]. I curse. I like to drink bourbon. I am very opinionated. When I first got there, when I was 19 years old, I think I was a little bit too much for most of the women I ran into. There are so many creative, passionate women coming up there now, but it wasn’t always that way. Louisville embraced me and has let me get away with my shenanigans. I love it.

When did comedy come into your life?
I always loved comedy. When I was a kid, my dad — he isn’t with us anymore — was a huge comedy fan. [Rodney] Dangerfield, Richard Pryor — I grew up watching those guys and thinking they were brilliant. My dad had the best sense of humor of anyone, to this day, that I’ve ever met. Things that made my dad laugh were huge to me, so I just became funny. Kids do that. They want that kind of approval. Actually doing stand-up, I was in a theater class, and a friend suggested I try it. I had kids when I was young and was kind of busy, so I was like, ‘Nah, it’s not for me.’ This is so cheesy to say, but she was like, ‘No, if you’re afraid, that’s cool.’ And that whole pride thing took over, I’m like, ‘Hold on, I didn’t say I was afraid.’ …

Any nightmare gigs that stand out?
There are so many. One I did recently: I got hired to perform at a swingers’ resort. There were a bunch of other comedians. It was on the up-and-up — all the swinging stuff would be happening away from us. I’m like, ‘The check clears: I don’t care what they do on their own time — no big deal.’ First of all, it’s in northern Ohio. You know for a swingers’ resort in northern Ohio, they aren’t sending the A-team, if you know what I mean. I pull up to this thing, a man and a woman meet me, both in their late ‘60s — she’s not wearing anything but tassels. He’s not wearing anything but a glowing ring… not around his finger. I was like, this is going to be a long night. A lot of people were not wearing clothes. I’m thinking: That’s a nudist thing, not a swingers thing. But they paid a lot of money to be there, so they’re going to let their freak flag fly. I don’t judge. The thing that got me was that they had a buffet of food. And not the kind of food I would want to eat if I was going to partake in that kind of activity. Like chili and real gassy food like that, and everyone’s parts are just hanging out all over the food. I was like, ‘No way, this is definitely breaking some kind of health code violation.’ •