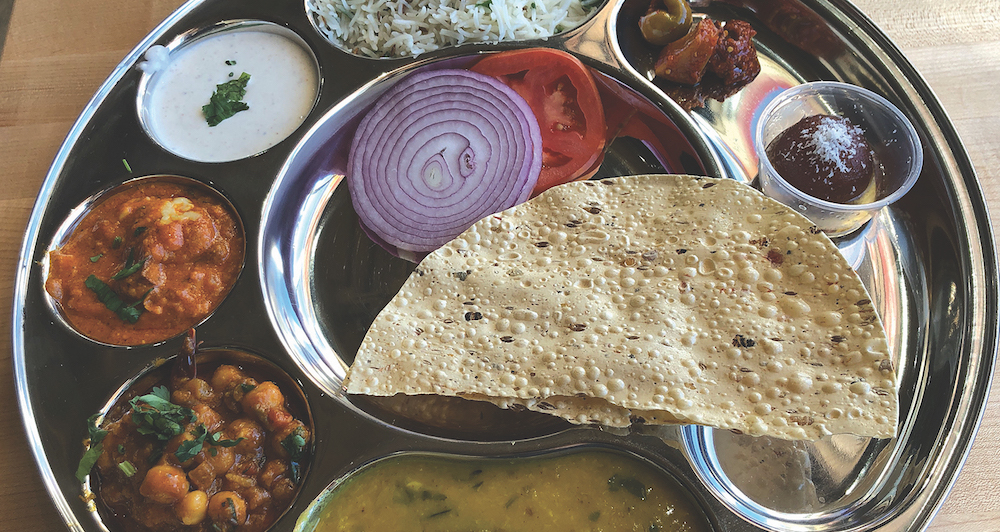 Way back in 1975, when hardly anyone around here knew what Indian street food was, Vijay Agrawal took his first steps toward culinary success when he added bhaji pav — a popular Mumbai veggie curry dish served with white rolls — to the selection of his outdoor chaat (snack) cart in downtown Ahmedabad, India’s fifth-largest city.

People loved it and before long Agrawal opened his first sit-down restaurant. He called it “Honest,” and the food was honest, and before long, he had shops all over Ahmedabad, then all across India, prompting jokes about “The Indian McDonald’s.” Next, the company opened shops in Thailand; and then, in 2016, it opened one in suburban Chicago, its first U.S. Honest Indian Restaurant.

Less than four years later, there are 14 Honest restaurants in eight U.S. states, plus two in Canada. Louisville’s first Honest Indian Restaurant opened about a month ago, after several months of construction, in a large vacant space near South Hurstbourne Parkway and Taylorsville Road that had housed a long-closed Beverage Warehouse.

It’s a large room, with large windows across the front and white and beige walls around the rest of the space. Drum-shaped pendant lights hang from a high ceiling with exposed metal rafters. Comfortable booths line the perimeter, with high-back chairs surrounding pale-tan, wood-look tables in the rest of the room.

The large, eight-page menu places its iconic bhaji pav on the first page and then goes on through more than 150 choices in an almost-bewildering set of subcategories, such as pulav, Bombay chaat, Indian-style pizzas and sandwiches, South Indian and Indochinese specialties and a long list of Punjabi dishes earmarked by gravy color: red, brown, green and white! There’s a good selection of Indian breads, lentil dal and rice plates, thali (combo) platters and even Indian desserts.

Pricing is attractive, with just about all the dishes within a narrow range from $5.99 to $9.99, save for the Punjabi specialties and thalis, which are tagged in the still-attractive range from $9.99 to $12.99.

Papads (99 cents) aren’t offered as a complimentary snack as is traditional, but we ordered one of these cracker-thin, fried lentil wafers for tradition’s sake. It was a good example of the genre, crisp and shattery, dotted with tiny bubbles and bits of crushed spices. It was slightly greasy from frying, but its haunting, earthy lentil flavor was just right.

Then, we moved on to bhaji pav ($8.99), the street-food dish that made Honest famous. It was a spicy, reddish-brown mix of vegetables and curry spices blended in a thick, spicy-hot puree, topped with fresh cilantro and served with a pair of square, white, toasted buns, chopped red onion and a lime wedge. I sprinkled onions and squeezed lime on the curry and ate it with delight, scooping up the curry (bhaji) with pieces of the bun (pav).

Honest offers three heat levels — mild, medium and hot — and did a good job of respecting those requests. The bhaji pav was hot but not painful. Our other dishes, ordered medium, packed pleasant but not challenging heat.

The chickpeas in the chana masala were large and firm, cloaked with a gently spicy, reddish-brown masala sauce. Paneer tikka contained several cubes of mild, Indian paneer cheese in savory, orange sauce. Dal was thin but flavorful; raita was smooth and cooling, and the rice was wonderful, every grain dry and separate and perfectly cooked, full of spice seeds and cilantro.  It also came with excellent roti, puffy, whole-sheet flatbread dotted with dark-brown charred spots from the grill.

To bring some leafy, green veggies to the table, we ordered aloo palak ($9.99), a traditional potato-and-spinach curry. The potatoes were good, tender but not mushy, covered with a thick, dark-green, mildly spicy spinach puree.

My usual appetizing antidote to the fire of Indian spice is yogurt lassi ($3.99), preferring the salty, plain version to mango or sweet alternatives. Honest’s lassi was excellent, not too thick and with cumin and pepper flavors and a cilantro garnish to add flavor interest.

Noise level: With the room less than half-filled for a late lunch, the noise was minimal in the large shopping-center space. (Average sound level was 72 decibels, in the range of normal conversation.)

Accessibility: The entrance, restrooms and tables except for booth seating appear fully accessible to wheelchair users.