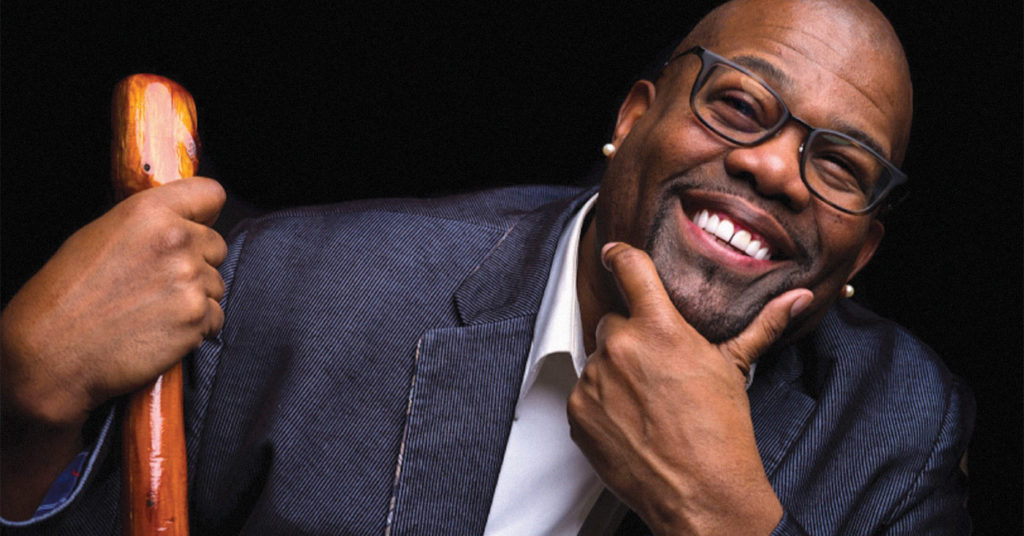 Comedian Darryl Lenox is as inspiring as he is hilarious, considering he’s been legally blind since he was a teenager. “People with disabilities are stubborn. We’re like, ‘This is what I have, but this is what I’m going to do.’ People without disabilities — they tap out a lot sooner,” he told LEO. Catch him at The Caravan Comedy Club this week.

LEO: How was it growing up in Las Vegas?
Darryl Lenox: I wasn’t a fan of it. When you’re a kid, I don’t know if you ever really know what to make of things. I appreciate it now because it made me kind of tough. People imagine it to be kick-lines and naked women. It’s Vegas — it’s glamorous on the outside, but on the other side, there’s crime everywhere. There’s slot machines in the laundromat, slot machines in the 7-Eleven — they’re everywhere. It’s a constant chase for money. It just doesn’t breed a good, civil situation.

So, it wasn’t a happy childhood?
Man, I was always a dreamer, so I was a happy kid. I wanted to be Reggie Jackson, so I started playing basketball. My dreams were always bigger than my circumstances. Even if the circumstances were that there wasn’t enough food for me to eat because I was the only boy of five kids and had to share. I never had the coolest clothes, but I always had that one-day mindset, and that kept me happy.

What brought you to stand-up?
I was still dreaming of basketball, and the woman I was dating at the time was tired of taking care of me and her two kids. She told me to stop: get off my lazy ass and do something. I always thought I knew how to make people laugh. So, I went to Seattle Underground, a comedy club, I did their Monday open mic, and I tore it up. They invited me to come back the next night and audition for a big comedy competition. I said, ‘I’m not ever going to do anything else with my life but this.’ I went from playing college basketball to doing comedy. I hate to say it started because of a woman, but Abraham Lincoln became president because Ann Rutledge broke his heart.

When your breakthrough album, ‘Blind Ambition’ was so well-received, did it put a lot of pressure on you for the follow-up?
Not a lot of pressure, but I have high expectations. When I was voted Top 5 Comedy Albums of the Year, it was cool that people could see that. But I was disappointed I didn’t get nominated for a Grammy. I want to be the Beyoncé of comedy. I want a trophy. So, there’s still some meat on that bone.

What advice would you give someone who thinks they can’t follow their dreams because of a disability?
I would be surprised if they really thought that. When you have a disability, you become so used to having it, you just end up doing it. You get through. Every single day is so difficult, that the dream doesn’t seem as hard as living with the disability. I bet there are more people without a particular disability that don’t chase their dreams. People with disabilities are stubborn. We’re like, ‘This is what I have, but this is what I’m going to do.’ People without disabilities — they tap out a lot sooner.

In a world where biopics are the Hollywood go-to, who would you cast as you? And what would call it?
You would have to do it in three parts. The younger me would have to be somebody even uglier than Urkel. Then, the 20s me would be like Nick Cannon with a crooked eye. Me now, I’m pretty good-looking. Denzel’s too old — let’s go with Tyrese Gibson. And the title would probably be what I was going to call my sitcom: ‘Lenox 20/20.’ •