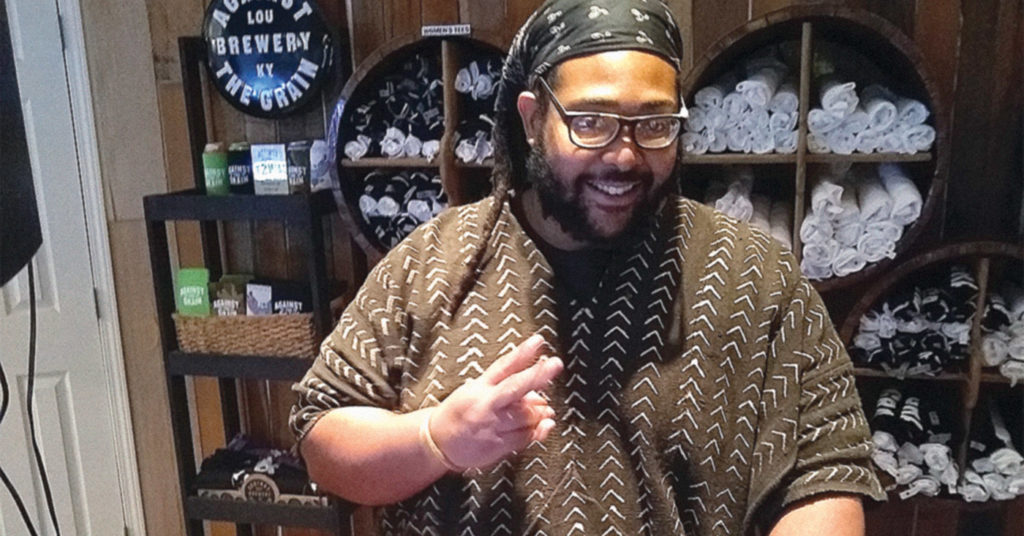 Obi Serikali (aka Nanss’) at a Beat Cypher event.

From songwriting tips to beat creation and equipment recommendations, a new series of public, interactive seminars is bringing together hip-hop artists in what has emerged as an ongoing collective.

Beat Cypher, which takes place monthly at Against the Grain Brewery’s bottle and gift shop, puts producers, writers and others from the local scene in one room. It’s a meeting of the minds that is unique in Louisville.

“I just don’t see this happening,” said Sasha Renee, a local hip-hop artist who was a guest host for the Nov. 22 Beat Cypher that focused on songwriting. “I don’t see any events or public spaces where producers are coming together and sharing their work with each other, with artists — sharing ideas, sharing techniques. I’ve never seen this done.”

As Beat Cypher heads into its third month with another session scheduled for Dec. 20, the turnout has been enthusiastic, the results promising for the future of the concept. The idea came to Against the Grain from local hip-hop artist and MC Arte Chambers. The brewery has long aligned itself with the local music scene, including Forecastle sponsorship and hosting live acts, so the idea seemed like the right fit.

“We were having live music every weekend,” Jessy Harding, special events manager at Against the Grain, said. “It wasn’t really worth it — we’re not a venue, so people weren’t coming to see it. We decided to redirect the money we were spending and focus on local artists.”

To that end, Beat Cypher hosts get paid and fed for their time and knowledge of their craft. In addition, they get to present their work to new ears while also helping out fellow artists.

“We really try to shine light on new artists who are working on their craft and trying to get noticed locally,” Harding said.

A Beat Cypher event consists of three components, according to Chambers. First, the host artist will make a presentation, whether it’s about methodology, new equipment or what have you. Next comes the cypher itself, with attendees presenting their beats and other creative works. Finally, comes a group challenge, where attendees get 15 minutes to use what they’ve learned to come up with a beat, part of a song, a sample, etc. Essentially, it’s putting the theme of the seminar to hands-on creative use.

Think of a cooking show challenge, but with music.

“We’ll have some special ingredients, and everyone will have a chance to make their own dish,” Chambers said.

The cypher brings value in layers because of its format. First, artists and producers get to learn from someone who is making similar music at a high level. In addition, attendees will be able to play beats or songs they’ve created to get feedback from the host and other attendees. The collaborative nature not only binds the group in the moment but enables artists to network in the local hip-hop scene in general.

“You can kind of get a second opinion on a sound you’re working on,” Chambers said. “It’s also an avenue to show off what you’ve been working on. I think the community we’re building around this idea is pretty open and receptive.”

Chambers doesn’t believe Beat Cypher is anything truly innovative, however.

“It’s honestly not a new concept,” he said. “I started doing it because I wanted to learn more about making beats and making electronic music. There have been other concepts like it. This is just kind of breathing new life into it. We just get together, play for each other and learn from each other.”

Renee said about 10 people attended her version of Beat Cypher, and that the response was positive.

“I got really good feedback,” she said, admitting she had only minimal experience as a moderator in that kind of format. “Afterward, a lot of people said, ‘This is something you should do all the time.’ I feel like people left with some knowledge and some skills.”

Harding said Beat Cypher will continue on in 2020 and will be moved to the first Friday of every month, adding that, “We’re hoping to be able to elevate the event through 2020.” •

The Dec. 20 Beat Cypher will feature guest presenter DJ HXVSE and will focus on turntabling, scratching and beat juggling. Admission is $5 or five canned goods, and the event is 4-9 p.m. The Jan. 3 Beat Cypher features Yons.