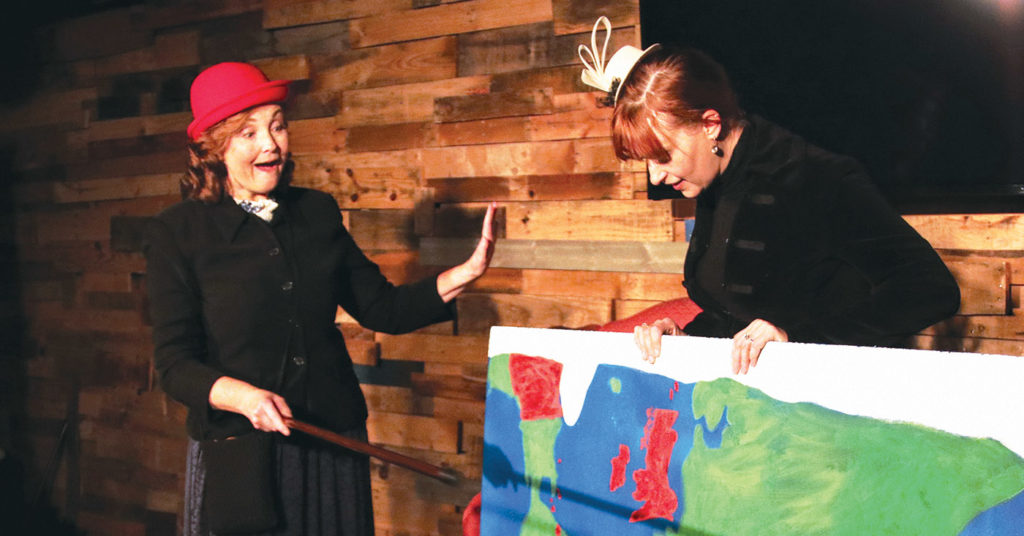 Michelle Lori and Valerie Canon in ’80 Days Around the World.’ | Photo by Dan Canon.

For sheer audacity, it’s hard to match Phileas Fogg’s impetuous decision in 1872 to wager half his wealth that he could set off that very day from London, circumnavigate the globe and make it back in time to share a drink with his mates at The Reform Club exactly 80 days later.

That, of course, is the basic plot of Jules Verne’s 1873 novel “Around the World in Eighty Days” (which, by the way, is a much better read in contemporary translations than in the appalling, expurgated versions published in the first half of the 20th century).

But when it comes to audacity, The Chamber Theatre has plenty to go around, and its partnership with the Gilbert & Sullivan Society of Louisville on a radically reimagined take on “Eighty Days” — “Around the World of 80 Days” — was a sparkling highlight of the theater year. (I am sad to report that it closed last weekend.)

Produced in the Hope Community & Culture Space in the Mellwood Art and Entertainment Center, this was by far the most ambitious production Chamber has ever undertaken: an enormous cast with abundant, double casting, a chorus of six and a couple of live instrumentalists.

It was a fully immersive experience that started with an imperious clerk at the Box Office, who handed out “passports” and British currency. It continued in the house, where patrons could use their new money to buy newspapers (and programs) from an engaging Papergirl with an intricately devised backstory (Sierra Conner). The Papergirl would later hawk “Extras” with breaking news about the voyage during the scene transitions.

There have been plenty of “Eighty Days” adaptations, but none quite like this, I suspect. For one thing, in this topsy-turvy take, gender roles have been reversed: Power and wealth are controlled by women. Men and boys are dim and foolish creatures to be dismissed, protected or controlled.

The Fogg in this play is named Phyllida, played with indomitable, British energy by Michelle Lori. Her entourage includes her long-suffering servant and traveling companion Passepartout (Valerie Canon); Nelson Bly, a journalist of dubious abilities owing to his gender (Todd Rogers); Fix (Jay Padilla-Hayter), a detective with a secret agenda and eventually a flamboyant entertainer named Prince Adi (James Thompson). And at every turn, Fogg and company encounter British Consuls (all played with bureaucratic glee by Sami Hall) and a series of poor Matchboys (all played by Tory Parker). Eventually, Fogg’s fate will intersect with a group of robbers known as “The Theological Virtue Gang” Faith, Hope and Charity (Cristina Martin, Mandy Kramer and Kalaunee Roger).

But it was the witty satirical sensibility — the upside-down sexism, pompous nationalism, unthinking disregard for colonials — that stood out. At one point the crew runs into Captain Ahab and encounters Moby Dick. One especially funny scene rooted in current British politics (perhaps subtitled “Dixit”) involves a Parliamentary debate on whether to separate Prince Adi from his, um, “member.”

On the way home, passing through Ireland, the troupe encounters the mordant wit of famine-hardened Paddy Whackery (Sean Childress). There is so much double casting here that I may have missed someone.

And although Director Martin French is credited with the “story concept and outline,” and the chief script writers are credited as French and Tory Parker, with editing by Michelle Lori, the company describes the script as having been collaboratively devised, with “jokes, ideas, lines, etc. from all.”

It was an extraordinary achievement to pull this together. And it certainly deserves to be revived in the future.

Another amazing production opened last weekend and has two weekends left. If you love Frank Capra’s classic Christmas film “It’s A Wonderful Life,” you have to see Steve Murray’s one-man show called “This Wonderful Life” at The Bard Theatre with Doug Schutte as the one man.

It would be wrong to think of this as a “reduction” of the Capra film. It’s a different creature altogether. And though I love the movie, in many ways I found this to be a richer, funnier and more moving experience than the original.

It’s a challenge for a single actor to play all those beloved (and be-hated) roles, to give voice to George Bailey, Mr. Potter, Mary, Violet, Clarence, Martini and the rest. But Schutte accomplishes that feat with such unassuming grace and ease that his virtuosic performance becomes just context for powerful message of the story itself. The end result is a deeply profound new work that distills the essence, the emotion and the moral clarity of the story.

I’ll be taking some people back to see this one. Maybe I’ll run into you there. •