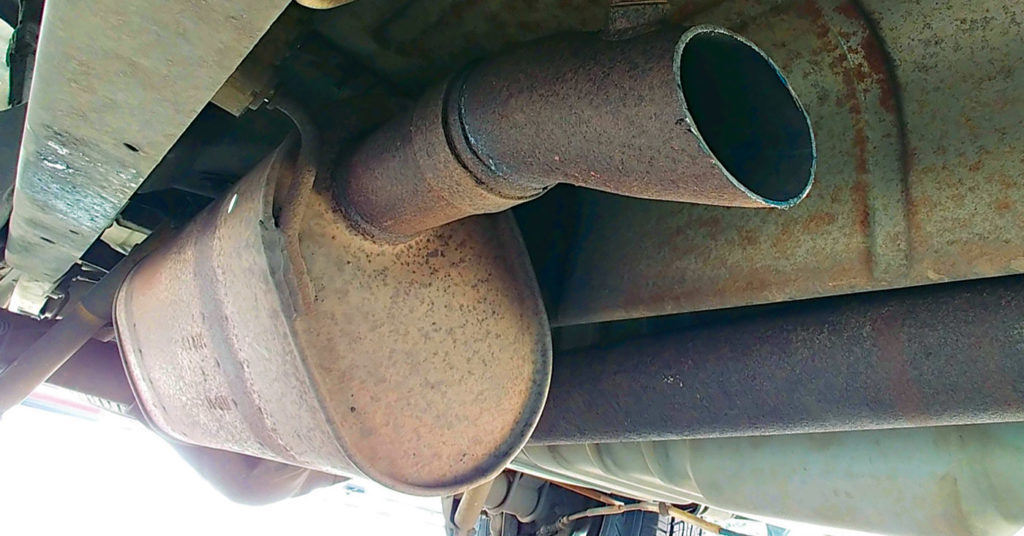 What remained after Jeral Tidwell’s catalytic converter was stolen.

Jeral Tidwell and his family were about to leave home on a Saturday. They piled into their Ford E-350 van, started it up and heard a sound akin to a tractor with a broken muffler.

“I knew exactly what had happened,” said Tidwell, an artist who lives near Churchill Downs.

His catalytic converter had been stolen.

This car part, which reduces a vehicle’s toxic emissions, is a favorite for thieves because it contains platinum and other metals, which can fetch a decent price at the scrapyard.

The theft of catalytic converters is not a new phenomenon in Louisville, but the police rarely see many occur one right after the other. But, that’s exactly what’s happening in Louisville’s Fifth, Sixth and Seventh police divisions in the past three weeks. Ten of them have been stolen in the Sixth Division alone, said Detective Jon Fischer, who is investigating the crimes. The last time he saw an outbreak of catalytic converter theft like this was four to five years ago.

Tidwell lives a little outside of the divisions where the surge of thefts has occurred, which stretch from The Highlands to the Fairgrounds and include the Okolona and Fern Creek neighborhoods.

Fischer believes the surge is connected to an uptick in the price of platinum that sellers can get for the converters at local scrapyards — around $50.

It cost Tidwell $275 to have his stolen converter replaced and installed.

It can cost as much as $1,000 and is typically around $300 to $550 at a muffler shop, said Robert Gates, co-owner of Gates Automotive Service on Bardstown Road.

Police are unsure whether a ring of thieves is involved or if the thefts are unrelated. They have made no arrests, but Beth Ruoff, a public information officer with the Louisville Metro Police Department, said there are some “people of interest”in this rash of converter thefts.

Police believe a white Ford F-150 may be involved, and they expect to have video surveillance that could aid the investigation, said Fischer.

The thieves use portable, reciprocating saws to remove the catalytic converters, which are a part of a vehicle’s exhaust system. The job can take as little as 45 seconds.

“They can just go at nighttime and then cut them off and be gone with them, and you’re never going to know until you start up,” Fischer said. “And it’s nothing more than taking a battery powered saw and just making two cuts.”

Most of the thefts have occurred in business parking lots on weekends, said Fischer. Broken-down vehicles on expressways also are targets, but people’s driveways are not safe from being hit, which is what happened to Tidwell.

Tidwell lives off of a well-lit and busy road and, still, no one in his neighborhood noticed the theft of his converter in action, which occurred sometime between midnight and 7 a.m.

“Which is kind of crazy,” he said.

Gates has sold a cage to someone to protect their converter, but it cost around $300.

Once a converter has been replaced, it’s just as easily stolen again. In one instance when Gates replaced a converter for the customer, it was stolen again while the vehicle sat in Gates’ lot.  (His company plans to install security cameras soon to prevent crimes like this from happening again).

As for local scrapyards, Fischer said, it is difficult for them to know if the converter they’re buying has been stolen. They are legally obligated to keep a copy of the seller’s ID, as well as records of their license number, the time and date of the transaction and description of the metal. All sales must be by check — not cash.

But, the converters don’t have serial numbers, which makes them harder for police to track, Fischer said.

All of this has left Tidwell feeling alone in his plight: His insurance company wouldn’t cover the expense because it was under his deductible, and the mechanic tried to charge him more than quoted.

“So, everyone got out of it except for me,” he said. “I felt like there was no responsibility anywhere except for the victim.” •